“The Love Witch,” a movie written, directed, and edited by Anna Biller, who is also responsible for its production design, costume design, and music. Film is a collaborative medium, true, but this picture is engineered to function as an expression of the sensibility of one person. And this sensibility expresses itself in some very unusual ways.

Biller's film is styled to look like a movie from the past. Its title character, Elaine, drives a blood-red 1960s Mustang convertible, and as she tools around the highways of the California coast, we notice she’s framed in a near-cheesy rear projection. Her voice-over is delivered in a stilted fashion. She explains that she’s looking forward to finding a new mode of life “up here where it’s quiet and clean among the redwoods.” Played by Samantha Robinson, Elaine is a coolly beautiful brunette whose black eyeliner and blue eye shadow are so pronounced as to be character defining. She’s recovering from a failed romance, she tells us, but the flashbacks don’t show a couple breaking up: they show a man drinking from a goblet and falling to the floor, poisoned. Soon Elaine is diverted from her musings and memories by a police officer, a ruggedly/cheesily handsome fellow who tells her she’s got a tail light out. He will figure later in the movie.

“The Love Witch” is, in its most immediately accessible form, a pastiche of low-budget horror movies of the 1960s and 1970s. There’s a deliberate cheesiness, or “cheesiness,” in the way the characters look, and the aforementioned stiffness extends not only to the way the actors speak but how they hold themselves. Robinson’s Elaine has a look that harks back to Soledad Miranda, the early ‘70s muse of gonzo trash artiste Jess Franco, but folks surrounding her have vibes from American-grown exploitation types; Wayne, the long-haired English professor she seduces on landing in a new town, has an unctuous “smile on your brother” free-love vibe, while Griff (Gian Keys), the cop who comes back into Elaine’s life after Wayne’s disappearance, is both ridiculously square-jawed and thick-headed. Everything about the movie seems to embrace a genre-loving, unstuck in time vibe—even the editing, which is sometimes inaccurate on purpose. In one scene, Elaine leans in to unzip one of her boots, and when the film cuts back to the master shot, she’s got both of her boots unzipped. This erroneous “matching” occurs several times in Biller’s film, emulating a common grammatical “gaffe” in the “bad” movies “The Love Witch” draws on.

As for the story: Wayne disappears because … well, Elaine finds him wanting. Being a “love witch,” she crafts potions to push things along romantically, and the combination of the brew and Elaine’s own erotic powers send Wayne off the deep end, turning him very needy almost overnight. “What a pussy,” Elaine muses in irritated disappointment. His inability to deal leads Elaine to extreme measures. Later she turns to the husband of a new friend in town who has similar difficulties in dealing with Elaine’s mojo. Her friend’s discovery of their affair also produces complications. And as for the investigation into Wayne’s disappearance, well, Griff proves more interested in winning Elaine than finding the hippie. Will third time be the charm for Elaine in this new town?

Genre convention says probably not, as does Elaine’s own temperament. She longs for the love of a man, but disdains male cluelessness. Preparing one of her witch bottles, and handling one of the objects of which she speaks, Elaine observes, “Tampons aren’t gross. Women bleed and that’s a beautiful thing. Did you know that most men have never seen a used tampon?” The longer the movie goes on, the more one apprehends that it’s not sufficient to think of it as a “homage” or “spoof.”

Biller is not like Hélène Cattet and Bruno Forzani, the directors of such retro-homaging genre fare as “Amer.” Those directors are formalists. Biller is a little closer to Peter Strickland, the filmmaker behind “The Duke of Burgundy,” which shares some of the themes of this film, but I think Biller’s a more astute and provocative thinker. The redolence of schlockiness she attaches to “The Love Witch” seems like an organic factor in her actual way of seeing. The movie is relentless in the way it poses questions about our culture’s way of dealing with the power of female sexuality (and it wouldn’t work without Robinson, whose appearance and performance is impeccable for the job) and acknowledges that there’s not only unease in these questions and their answers but also mordant hilarity. 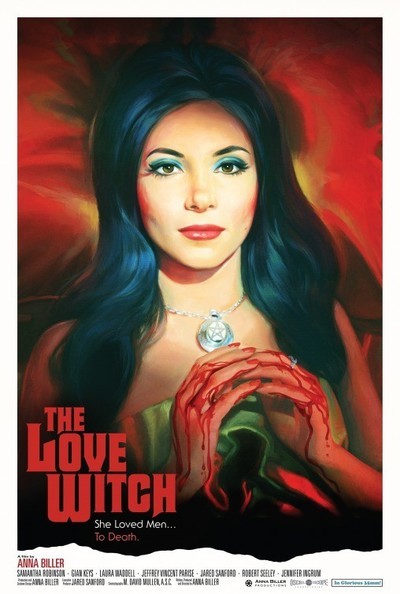