Incoherently directed, thematically muddled, and poorly acted, writer/director/producer/star Livia De Paolis’ drama “The Lost Girls” should have stayed on the page. Based on a novel by Laurie Fox, the film follows four generations of Darling women in the aftermath of their adventures with Peter Pan.

Inconsistently employed title cards set the action, starting in London 1988, where six-year-old Wendy Margaret Darling Braverman (Amelia Minto) is told by her kooky grandmother, the original Wendy Darling (Vanessa Redgrave, somehow), that Peter Pan will come for her when she’s 12 or 13. Although Redgrave does her best to add awe and wonder to this statement, it comes out more like a creepy warning. Cut to Manhattan 1995, where 13-year-old Wendy (Emily Carey) is no longer homeschooled by her equally creepy father (Julian Ovenden) and is finally visited by Peter Pan (Louis Partridge), and also has a lurid encounter with Captain Hook (Iain Glen).

Wendy grows up, with important moments in her life sometimes shown through montage, sometimes through longer scenes, with no title cards indicating how old she during any of these moments. This creates confusion when De Paolis herself takes over the role. Is she still a teenager when she meets her husband-to-be Adam (Parker Sawyers) after a graduation (they never say what she’s graduating from)? Hard to say. Time passes on and their terrible relationship plays out until finally a third title card appears. It’s 2013, and Wendy and Adam’s daughter Berry (Ella-Rae Smith) is now herself 13 and about to have her own fateful adventure with Pan.

Narrative confusion aside, it’s unclear what De Paolis is saying with this material. Are all the Darling women dealing with the effects of inherited mental illness? It’s implied that Wendy’s mother Jane (Joely Richardson) ran off before she was six years old and that her grandmother has been in and out of mental institutions. Wendy herself has visions that could be schizophrenia delusions. Even Berry has a moment that could be read as a break with reality.

There’s also all this weird, hamfisted dialogue about aging. Peter makes all the girls promise they will never age. Wendy has a breakdown when her husband tells her she’s too old to be behaving the way she does. She replies, “Thank you for reminding me I’m getting too old for anything!” When the younger version of the original Wendy Darling (Siobhan Hewlett) reveals she is a mother to Peter, she cries as she tells him she’s old (the actress playing her is 39!). The confession is played like she’s revealing she has cancer and is about to die.

But, wait there’s more. Peter appears to be grooming the girls to be his surrogate mother; except Jane, whose more racy relationship with Peter is told only through occasional flashes. This grooming is not really explored at all, but the film does not shy away from the lasciviousness of Captain Hook. He straight up sexually assaults the Darlings, violently forcing them to kiss him. At one point he seductively eats a peach while telling Wendy she’s a peach. Another time he leers at her, stating “all girls know me” while suggesting it’s Berry’s turn. It all comes across very anti-sex, anti-sexual coming-of-age. If Never Neverland represents the freedom of childhood for girls, then everything that comes with teenagedom and beyond is bad, maybe even evil.

And what of Never Neverland? The film's few visits are underwhelming. When young Wendy first goes there, with the aid of incredibly cheap CGI flight, she and Peter arrive on a field filled with purple flowers that is directly cribbed from the first “Twilight” film. She runs through a forest filled with half dead ferns that we’re meant to feel is magical, but it just looks sad. It would be giving the director too much credit to say the dead ferns are a way of showing that childhood isn’t perfect either.

The younger actresses playing Wendy do a fine job showing her as a curious young girl and an angsty teen missing her mother, but when the film pivots to De Paolis as the grown up Wendy, the one thing holding the film somewhat together completely falls apart. She is stiff and has no chemistry with any of her co-stars, and the sudden appearance of an Italian accent is jarring. The relationship between Wendy and her husband Adam is poorly defined. Because they have no chemistry together as a couple, it makes no sense why he would stay with her given how rude she is to him all the time, despite them having a child together.

Ella-Rae Smith tries her best to elevate the hackneyed mother-daughter angst Berry feels towards her mother, but De Paolis saddles her with the cringiest line (in a film filled with almost non-stop cringe-worthy dialogue) during a dinner table fight. Leaving in a huff, she shouts “sayonara mama” and I swear at this point my soul left my body.

Both Vanessa Redgrave as the original Wendy and Iain Glen as Hook at least made the wise choice to camp it up, while everyone else in the cast tries to play it straight with disastrous results. Glen in particular should get an award for remembering to keep the cheap-looking hook the costume designer attached to his hand in the frame every time he delivers another lecherous monologue straight to camera. Unfortunately, a few batty performances aren’t enough to make De Paolis' film worth finding.

"The Lost Girls" is suitable only for those who want as many post-public domain Peter Pan films as they can get. Everyone else would be better off revisiting any other ideation of this story to get their fix. 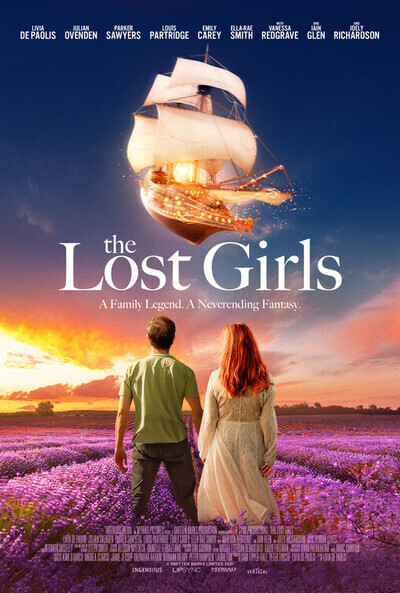