It's hard to figure out at first what is going on with Leda. The woman with the symbolic Yeatsian name is a professor and translator, taking a brief vacation in Greece, and looking forward to relaxation in the sun. However, almost immediately upon her arrival in the small seaside town, things start to go strange. Leda is the center of the strangeness. Is she generating the strangeness, or is it the world that's strange? Why are her reactions to things so intense? Why is she so paranoid and awkward? What is going on with her? "The Lost Daughter," an adaptation of Elena Farrante's 2006 novel of the same name, is Maggie Gyllenhaal's directorial debut, and what a debut it is. Harrowing, unpredictable, painful, confrontational, this is a movie for grown-ups.

One of the most extraordinary things about "The Lost Daughter" is Gyllenhaal's dogged resistance to explaining the mystery of Leda. Why does Leda do what she does? Well, you learn a lot of the backstory, but any one answer given would be incomplete. On the second page of Ferrante's book, Leda states: "The hardest things to talk about are the ones we ourselves can't understand." Notice that it's not "don't" understand. It's "can't," which is very different. Leda does not know why she does half the things she does. She is obsessive. She is compulsive. She is at war with her own impulses. "The Lost Daughter" traverses extremely rocky terrain, and Gyllenhaal's close focus on her lead actress, hewing to the close first-person of the novel, makes for an unnerving and at times even frightening experience. You get the uneasy sense that Leda may not be the most reliable of narrators.

Leda (Olivia Colman) settles into her vacation, reading on the beach, swimming, and trying to sleep at night even though the beam from the nearby lighthouse swoops through her room like a searchlight. The caretaker Lyle (Ed Harris) is kind and helpful, but there's something strained in Leda's responses. She's polite, yet seems unable to bear social interactions. She endures conversation, waiting for it to end. A couple days into her vacation, a boisterous loud family arrives on the beach. Men, women, children, talking loudly, splashing, setting up blankets and chairs and food. Leda can no longer concentrate on her reading, so she watches them, trying to put together who is who. Leda is drawn in particular to a young woman in a bikini (Dakota Johnson), playing with her small daughter. There's something way too intense in Leda's focus on this mother-daughter. Her eyes follow them. There's a hugely pregnant matriarch named Callie (Dagmara Dominczyk), who asks Leda if she wouldn't mind switching to another beach chair so the whole family can sit together. Leda refuses. Callie cannot believe it. Leda endures hostile glances from the entire family for the rest of the day, and everything is ruined so she flees the beach. The next day, though, she's drawn back in.

These mysterious and tense present-day sequences are interspersed with scenes from Leda's life twenty years prior. These scenes don't function as flashbacks. They run on a parallel track, creating a confusing melee of sensations and parallels, as well as filling in Leda's story. Younger Leda is played by Jessie Buckley (so believable as the younger Colman), and younger Leda is frazzled, irritated, overwhelmed trying to balance her career ambitions with parenting two small clingy daughters. When a hot-shot celebrity scholar (Peter Sarsgaard) shows an interest in Leda's work, it's catnip to the downtrodden woman. She wants to be free, she is sick of responsibilities, sick of all of it.

Meanwhile, Leda befriends the young woman in the bikini, whose name is Nina. Leda takes on a motherly role, but there's something "off" about the whole thing. Her interest is too intense. Johnson plays Nina with a fascinating mix of languid pleasure and taut desperation. Nina is "acting," and with good reason. Callie, her sharp-eyed sister-in-law, sees all. You do not want to mess with Callie.

In the book, Leda says at one point, "The unspoken says more than the spoken." While this is undoubtedly true for the most part, it's not true when you're dealing with an unreliable narrator like Leda, someone so consumed with self that every interaction shivers with threat, desire, insecurity, and all the unresolved issues Leda projects onto the other person. Because she is so consumed with her self, she misinterprets the "unspoken" all the time. She misinterprets gestures, body language, pauses. She perceives threats where there may very well be none. She seems to misinterpret Lyle's kindness, which brings out strange wild responses in her. She misinterprets the young guy working at the beach club. She "can't understand." If Nina is "acting," then so is Leda. We do eventually learn what Leda did back in the day, but that still can't fully explain her choices—one in particular—on this fateful vacation.

Films are sometimes rejected by audiences because the characters aren't "relatable." Yes, some characters reflect back to you your own experience, and that's very validating. But some of the greatest characters in literature show us things we don't want to look at, show us the ugly parts of humanity, the dark petty parts, the parts where we don't do our best. These things are as true, if not more true, than what is deemed "relatable." "The Lost Daughter" accepts ugliness, giving it space to express itself, allowing it to exist without careening back into safe territory.

Capturing all of this swirling "unspoken" subtext was Gyllenhaal's challenge. There's a lot of emotional chaos ricocheting around that beach, among all of those daughters, daughters lost and otherwise. Gyllenhaal allows for the chaos. She doesn't try to nail it all down. She doesn't race for clarity. Her approach is turbulent, subjective, and so close to Leda's point of view it's almost claustrophobic. Leda is watchful and distressed, sometimes impulsive and sloppy, always lying and pretending, and increasingly unable to hide her eerie inner world, from other people and from herself. Colman’s is one of the best performances of the year.

Now playing in select theaters and available on Netflix on December 31. 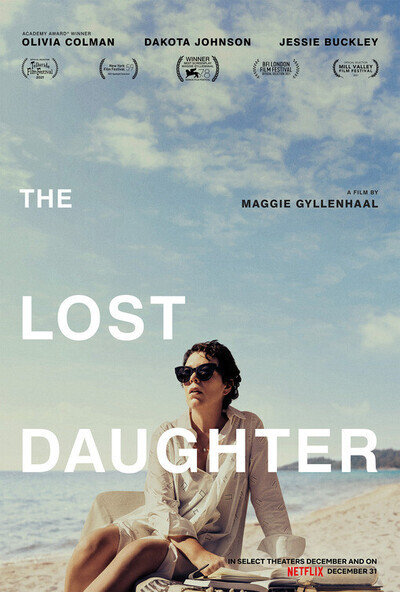 Paul Mescal as Will