The Lives of Others

The little gray man has an oblong head, bald on the top, with a trim salt-and-pepper cut on the sides. His face is pale, his features bland -- not sharp, not soft, but somewhat indistinct, except for his steel blue eyes. It's the face of an invisible bureaucrat, the kind of unnoticed figure who watches from behind walls. He wears a gray jacket, zipped up tight, with lighter, angular patches on the shoulders and chest, highlighted by silver rivets for a military effect that suggests both the state uniform he used to wear and a drab Eastern bloc knock-off of some '80s New Wave fashion-band outfit. Everything about him is symmetrical and monochromatic, rigid and straight.

It feels like science fiction -- "Fahrenheit 451" or "THX-1138" or "Brazil," with roots in Kafka and Orwell -- but the chilling and chilly dystopian world of writer-director Florian Henckel von Donnersmarck's "The Lives of Others" existed. The film, which begins in 1984, is a depiction of historical reality, not a cautionary fiction. It's set in East Germany, the German Democratic Republic, then a Soviet bloc communist-totalitarian state. Think of it as "The Conversation" behind the Iron Curtain.

Wielser is just one of hundreds of thousands of anonymous secret police employed by the Stasi, a massive domestic intelligence effort designed to keep tabs on German citizens and weed out possible subversives.

"The Gestapo had 40,000 officials watching a country of 80 million, while the Stasi employed 102,000 to control only 17 million," said famed Nazi hunter Simon Wiesenthal, who considered the Stasi worse than the Gestapo "if you consider only the oppression of its own people." According to various estimates based on government documents discovered after 1989, when full- and part-time paid Stasi informants were included in the total, East Germany may have had one spy monitoring every 50 or fewer citizens.

When Wielser catches sight of poet and playwright Georg Dreyman (Sebastian Koch, who resembles Jeroen Krabbe) at the premiere of his new play, he takes an instant dislike to him. The acclaimed artist is vain and arrogant, and is living with his illustrious leading lady, Christa-Maria Sieland (Martina Gedeck), which arouses in Wiesler feelings of envy and disgust. What's more, the Minister of Culture (Thomas Thieme, in the Sydney Greenstreet role) has his eye on Christa-Maria, toasting both the actress and the writer at the after-party in a tone that feels more like a veiled threat than praise.

Soon, Wiesler has his eyes and ears on both of them, bugging their apartment so that nothing that happens within its walls escapes his scrutiny. In science, the "observer effect" is a phenomenon whereby the very act of observing something changes its behavior. In "The Lives of Others" a similar principle seems to be at work. Although Georg and Christa-Maria are not consciously aware that they're being watched, you get the feeling that they sense an indefinable, soul-crushing pressure bearing down upon them. A related term, "observer bias," describes how watchers tend to interpret behavior to fit their expectations.

You expect the movie to focus on the charismatic couple and their "subversive" activities (they drink, party with artistic friends of questionable political correctness, and have sex!), but "The Lives of Others" is really about the observer, the anonymous little gray man. He's supposed to maintain his distance, but the lives of the others he's monitoring begin to infiltrate his own consciousness. One tiny moment of intervention -- causing their doorbell to ring at a moment of his choice -- becomes electrifying, because it signal that Wiesler's professional detachment has begun to crack.

"The Lives of Others" is nominated for the best foreign film Oscar, along with Guillermo del Toro's "Pan's Labyrinth" -- another of the best movies in current release. Watch it, and you may get the feeling it's also watching you. 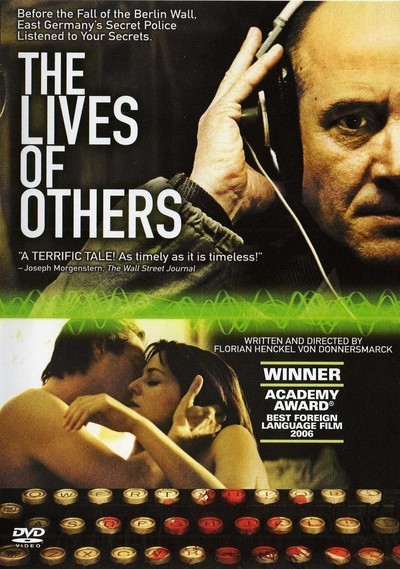 Rated R some sexuality and nudity