There's a good, dark, messy movie in "The Lifeguard" trying to get out. It's there, flickering at the periphery, visible in some of the scenes, and in a lot of the performances. But it's never allowed to spill over. "The Lifeguard" is hemmed in by vagueness and cliche, and nearly ruined by its soundtrack, an insistent barrage of thematically obvious alt-radio music cues. Too bad. There's some good stuff here. It's not the most original of concepts, and writer-director Liz W. Garcia struggles with the tone throughout, but "The Lifeguard" is often saved by Kristen Bell's sensitive and complex performance.

"The Lifeguard" is the story of Leigh (Kristen Bell), valedictorian of her high school class, reporter for the Associated Press, living in New York City. We see her life in a meandering collage that opens the film. She had been dating her editor, who then gets engaged to someone else (he says to a friend on the phone, right in front of Leigh, "It's about time I manned up!"). To make matters worse, Leigh wrote a story about a tiger chained in a New York apartment. The tiger died of malnutrition. Lost in the symbolism of her own story, Leigh relates to said tiger. On a moment's notice, literally mid-drink at a night spot, Leigh goes back to her apartment, packs her bag, packs up her cat, and moves home to live with her parents, not even informing them of her plans. Her parents (Amy Madigan and Adam LeFevre) are surprised, and her mother, in particular, is not all that thrilled. "Are you having a nervous breakdown, Leigh?" her father asks.

Leigh has always done what is expected of her and she thinks she should be allowed a break. She's a bit of a pill. She doesn't help clean up around her parents' house, and when her mother says that they "expect her to contribute", Leigh says, "To what?" Leigh magically gets her high school job back, as a lifeguard at a condo pool. The script makes the fact that she is about to turn 30 in two months a big deal, some marker filled with significance. Leigh insists repeatedly that she is "29 and 10 months". People sometimes go through chaotic seasons, and sometimes good films are made of such circumstances. But the "turning 30" thing feels artificial, an easily promotable tagline for the film.

Once ensconced in her childhood room, Leigh reaches out to a couple of old high school pals, Mel (Mamie Gummer), now the assistant principal at their old high school, who is married and trying to have a baby, and Todd (Martin Starr), a clearly closeted guy who works in an art gallery that nobody ever visits. Mel was a wild teenager. Leigh's return makes Mel start to rebel. Again, there are possibilities in this material, and we even get glimpses of how weird it could go if the movie would just let it alone.

In her job as a lifeguard, Leigh befriends a couple of skateboarding teens named Jason (David Lambert) and Matt (Alex Shaffer). Both kids are dropping out of high school and going to move to Vermont to look for work. One of the things "The Lifeguard" does really well is capture the sweet restlessness of a certain kind of teenage kid. Jason and Matt are not jaded, dead-eyed cynics. They are outcasts and misfits, and both come from difficult backgrounds. They just want to be left alone. They feel they know what they need, and what they need is to get out of town. Alex Shaffer is particularly excellent at showing the agony of a boy who is dying to be free, from what he doesn't even know.

At first, Leigh takes on the role of elderly career counselor, telling them to stay in school, not "drift" (like she is doing). Todd, Mel and Leigh start hanging out with Jason and Matt, getting high in the woods and talking about life. Mel is panicked over how inappropriate it all is (she is the boys' Assistant Principal, after all), and she's right to be panicked, especially when Leigh starts up an affair with Jason.

There are clearly moral implications here, and true danger, something "The Lifeguard" tiptoes towards and then avoids. It's a giant cop-out. Leigh never fully immerses herself in that pool she watches over. The sex with the kid may be hot, but she knows this is just a stop-over. She still checks her work email. Someone submitted one of her articles for a "journalistic prize." Leigh's lost state seems inherently temporary, and that lowers the stakes of the entire picture. Someone like Jason, the teenage kid, may be on his way towards being permanently lost.

Kristen Bell is such an interesting actress, with her serious open face, reminiscent of Norma Shearer's. When Jason says to her, "You seem so sad," he is telling the truth. She is given some pretty bad lines here, which she saves single-handedly by underplaying or throwing them off casually. Leigh is not easy to like and Bell is not afraid of being unlikable. It is to her credit. If only we could be allowed to watch her without having yet another swoony-angsty song telling us how we should feel about it all. 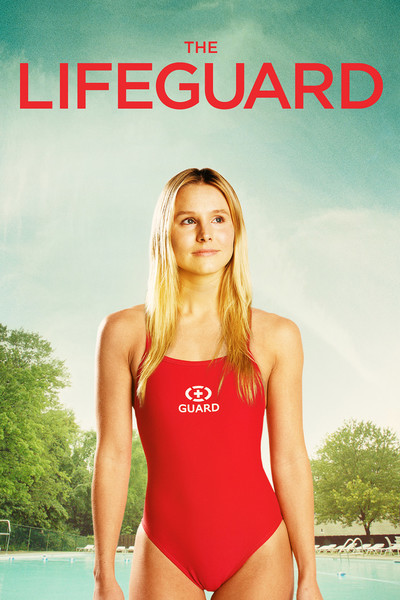