Many films try and fail to pull off the kind of densely over-plotted action-fantasy that director Breck Eisner ("The Crazies," "Sahara") nails in "The Last Witch Hunter." The secrets to Eisner's success are confidence and patience, both of which compensate for the film's script whenever it becomes embarrassingly thin (especially during its rushed finale). Still, if nothing else, "The Last Witch Hunter" is so much more adept than other recent convoluted post-"The Matrix" adventure films about a superhuman men-of-action (Vin Diesel, in this case) who see the world for what it really is, and are humanity's last hope of maintaining a peaceful status quo. While most other films sprint through expository dialogue, and bluster their way through action scenes, "The Last Witch Hunter" is measured enough to make you want to suspend your disbelief.

An especially charming Diesel plays Kaulder, a witch-slayer who was cursed to live forever by the Witch Queen (Julie Engelbrecht) back in ye olde viking days. An integral member of the mortal-led witch-hunting organization Axe and Cross, Kaulder has grown full of himself after centuries of walking the Earth unchallenged. But when Ellic (Michael Caine), Kaulder's sidekick and the chronicler of his stories, dies on the day of his retirement, Kaulder investigates, and discovers a plot to revive the centuries-dead Witch Queen.

Here's where "The Last Witch Hunter" starts to get so dorky that you may want to give yourself a wedgie for enjoying it. In order to stop the Witch Queen, Kaulder must "remember [his] death," a clue left for him by Ellic in smudged fingerprints all over one of Ellic's most prized books. The Rolodex of enemies and fair weather contacts that Kaulder meets up with on his rocky road to remembering is embarrassingly preposterous. Their ranks include Max Schlesinger (Isaach De Bankolé), a blind pastry chef-cum-magician who makes cupcakes out of psychedelic moths, butterflies, and maggots, and Belilal (Ólafur Darri Ólafsson), a squat, curse-slinging warlock whose bushy beard and barrel chest makes him look like one of ZZ Top's touring bassists.

What makes this scenario work are the periodic flashes of intelligence that prove that the film's trio of screenwriters  thought about what motivates Kaulder. Diesel's usual cockiness suits his character. As he points out to Dolan the 37th (Elijah Wood), Ellic's successor at Axe and Cross, there's nothing he hasn't seen. Diesel is well-used in that sense, proving he's more than a blunt instrument in scenes where he huskily broods and sweet-talks his way around the film's most unwieldy exposition. Few action stars can convincingly mansplain their way through a scene where mystic rune stones that control the elements are used to stop and start a thunderstorm. Diesel is on the short list.

There are even fewer directors who are sensitive enough to sell scenes as conceptually all-over-the-map as the ones showcased here. But thanks to Eisner, there are blessedly few scenes in "The Last Witch Hunter" that feel rushed (can we please get this guy to direct the upcoming "Doctor Strange" movie's sequel?). Romantic banter  feels genuinely playful in scenes like when Kaulder and Chloe (Rose Leslie), a young witch, flirt at Chloe's hookah bar. There aren't nearly enough scenes where Eisner can flex his muscles and prove that he's a stronger storyteller than the script with which he's working; the best is probably when Chloe comes home and silently tries to ward off a threatening spirit with an array of light bulbs. This scene teaches you how to watch it. No character has to explain that the bulbs' light is Chloe's only defense against whatever is threatening to invade her home. You just pick up that knowledge by watching Eisner work.

Eisner's direction is similarly thoughtful during big special-effects-driven set pieces. He's a sturdy choreographer, and none of the big action scenes in "The Last Witch Hunter" are as good as those from his surprisingly atmospheric, recent remake of George Romero's "The Crazies." But flashbacks to Diesel's "Dungeons and Dragons"-worthy encounters with the Witch Queen and modern-day skirmishes with Belial do look good, and that's not just because of Eisner's keen eye for composition. "The Last Witch Hunter" is just generally poised in ways that most fantasies should be, but aren't. There's breathing room in scenes where characters have to appear to be living with decisions they made a couple of scenes earlier. You know you're seeing an atypically dopey but consummately well-assembled fantasy when poor Michael Caine has to explain to viewers the Witch Queen's plan to spread a human-decimating plague using the various witches that Kaulder locked up over the years in the Axe and Cross's "witch prison." "The Last Witch Hunter" may be corny at heart, but it's cool enough to convince you otherwise while its creators sell you a story you've seen some iteration of many, many times before. 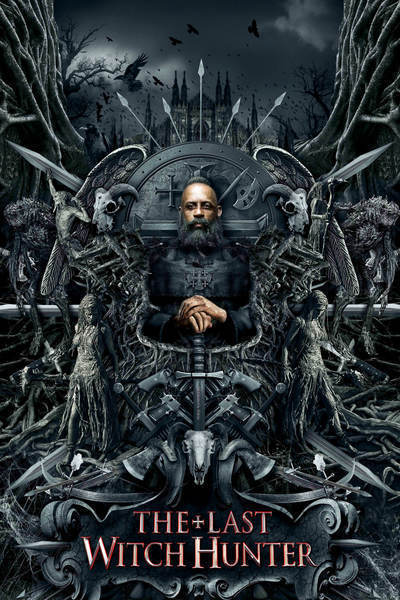 Rated PG-13 for sequences of fantasy violence and frightening images.