"The Last Movie Stars" is actor/director Ethan Hawke's nonfiction series on acting, creativity, Hollywood, marriage, and a lot of other subjects. It will be catnip to anyone who's interested in Paul Newman, Joanne Woodward, and 20th century American acting, cinema, theater, and politics. Newman, of course, was a sought-after leading man in the '50s, '60s, '70s, '80s, and '90s, and eventually won the respect he craved as an actor. His wife Woodward had critical acclaim from the start (Newman, to his credit, was her number one fan) but suffered from inverse feelings of inferiority: Newman became one of the biggest stars in the world, drew what a wife would consider to be the wrong sort of attention from women, and continued to be a star well into his seventies, while Woodward increasingly had trouble getting lead roles in projects that Newman wasn't attached to.

The project draws heavily on transcripts of recordings of interviews Woodward and Newman did with screenwriter Stewart Stern (of "Rebel Without a Cause" and the Woodward-Newman classic "Rachel, Rachel") for a never-finished personal history project. For unknown reasons, Newman destroyed most of the tapes, and the handful that were remained were unusable, so Hawke assigned actors to read the salvaged transcripts. George Clooney plays Newman, Laura Linney plays Woodward, and assorted supporting performers play actors, directors, and writers who knew the couple. Every one of the voice performances succeeds as both an approximation of the person's sound and an interpretive bit of character work (Brooks Ashmanskas' version of Gore Vidal, in particular, is eerily on-point).

The end product suggests a hybrid medium. It's as if a radio play or podcast had been set to clips from the stars' films and period-appropriate documentary footage of Hollywood, New York, and points in between. Occasionally we'll see photos from Woodward and Newman's family albums, bits of home movies, and snippets of Hawke and the voice-actors discussing the material via Zoom (Hawke started production during the early stages of the Covid-19 pandemic).

The six-hour series follows the two actors from their first appearance together in the same New York stage cast (they were already dating at the time, even though Newman was still married to his first wife, Jackie Witte) through the final years of their lives. Along the way, "The Last Movie Stars" surveys the changing times. All the expected high points get touched on, from Woodward and Newman's most acclaimed performances on the stage and screen (including Woodward's Oscar for "The Three Faces of Eve" and Newman's belated recognition for "The Color of Money") to their civil rights activism and Newman's forays into race car driving and gourmet food products (Newman's eldest daughter Nell founded Newman's Own, which gives all profits to charity).

But the series doesn't shy away from the strain placed on the marriage by Newman's stardom and drinking and self-destructive behaviors, or the many tragedies they endured together, including the 1978 death of Newman's only son Scott of a drug overdose, which led them to create the Scott Newman Center for rehabilitation. (The center finally closed in 2013.) And it's quietly revelatory to hear all Newman's children speaking so frankly about him and Woodward, from their apparently insatiable sexual appetites (for extra privacy, their bedroom had two doors) to the unsavory start of the marriage ("I can be disgusted with my dad when I think of my mom," says Stephanie Newman, whose mother is Jackie Witte, "But it isn't the only feeling.")

The series is most original and affecting when it's exploring the dynamics of a marriage between two gifted and famous artists who had many children and stepchildren even though they might not have been cut out for the job. Woodward admitted to Stern "I'm not a natural mother" and told him, "I hope the children understand that though each and every one of them were adored, if I had it to do all over again, I might not have had children. Actors don't make good parents."

"The Last Movie Stars" also explores Newman's muted personality and relative emotional inaccessibility, in relation to his children, wife, friends, and relatives. Acting released something in Newman that remained caged when footlights or cameras weren't on him. He didn't weep for anyone or anything until his daughter Nell was born. The rascally, flirty screen persona that he devised in the 1960s was nothing like the real man. He told Stern that "Joanne gave birth to a sexual being" when she married him, and that "Newman as sexual object was invented."

You feel the weight and length of the six hours, but not in a bad way. Watching the series is like reading one of those engrossing doorstop-sized biographies that wants to say everything that could possibly said about its subject, and that takes a while to get through. There's material that could've been trimmed for flow and/or running time. But that would mean losing insightful present-day digressions that contribute to the sense that Newman and Woodward are significant cultural figures whose work continues to inspire. Many of the least on-point bits are the most quotable, as when Vincent D'Onofrio (who voices director/actor John Huston) says that if you tell yourself when you're young that you're going to be an artist and stick with it, in 20 years "you're gonna be a f**kin' artist."

The backbone of the series is the story of two talented people with strong personalities coming together early in their adult lives and staying together right up to the end, grappling with challenges brought on by success, and enduring tragedies that have ended other unions. If Ingmar Bergman hadn't already directed "Scenes from a Marriage" (and if HBO hadn't remade it as a series) the title would've worked here—and there would have been a meta layer superimposed over it, thanks to the way Hawke and a team of editors deploy scenes from Woodward and Newman's films to do more than one thing at a time. Like Mark Rappaport, who pioneered the nonfiction film essay about Hollywood stars in "Rock Hudson's Home Movies" and "From the Journals of Jean Seberg," the filmmakers don't just place film clips where they're chronologically supposed to fall: they also use them to comment on whatever is being discussed.

This device never feel forced, because the supple cutting leaves room for us to make our own connections; at its most straightforward, the editing evokes the thought processes one might have while watching a film that stars an actor you know a lot about, and thinking about how a scene echoes an incident in their life, and wondering if the echo is incidental or intentional. One episode overlays a discussion of Newman's artistic inferiority complex with a scene from "Paris Blues," a film about interracial friendship and romance in the 1960s Paris jazz scene. Newman's costar and friend Sidney Poitier, playing a composer and trumpeter, listens to Newman's character play a trombone solo then says he's going to give his part to an oboe player. Newman's character wants Poitier's to say the performance was great. Poitier won't do it, allowing only that "It's good, man ... It's better than bad." This series is way better than good. It's easy to imagine people who know nothing about Newman and Woodward being mesmerized by it. 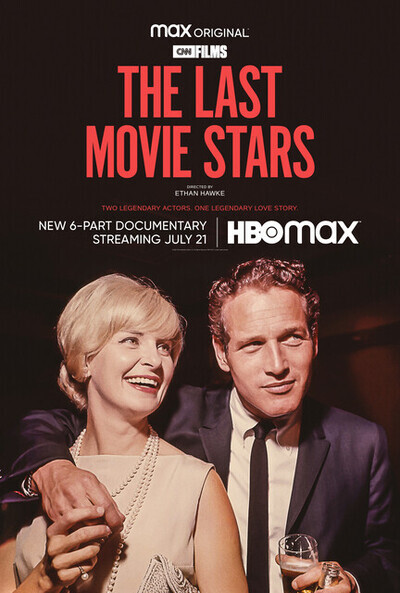 Paul Newman as Himself

Joanne Woodward as Herself