He is a very clean old man, who has reduced the necessities of his life to the point that even his one-room efficiency looks spacious.

He has a bed, a reading chair, a floor lamp, some cabinets, and a dining table in the kitchen area. Often he sits by the window, reading books of philosophy. Once he was a violinist.

He lives in the kind of boarding house I don't think you see much anymore, except in the movies. One flight down is Ida, a widow, who has made her apartment into a cozy nest. One flight up is the young couple who are always fighting. One night, the girl hides in his room, because she is afraid of her boyfriend.

The old man's name is Joseph Kopple (Armin Mueller-Stahl), and he has something she wants: A key she threw out the window, and which landed on his sill. Her name is Charlotte (Olivia d'Abo), and her life is pointed in the wrong direction, but she is still young, and not without grace. At first, he wants nothing to do with her; his life follows an orderly routine that, in his 70s, he has no interest in altering. Gradually, because she is desperate and he offers a refuge, they become friends.

"The Last Good Time" is really a movie about old age and passion, although a plot has been stirred in to give it structure.

The plot, not very interesting, is about how the man discovers he owes his life savings to the IRS, and about how the girl was involved in a deal with her boyfriend that may get her some money, or a lot of trouble. (If this were a European film, it would be about their personalities and daily lives, and that would be enough.) Joseph's best friend is Howard (Lionel Stander), who used to be a neighbor but is now spending his last days in a hospital bed. "I'm so old, my future is blank," he says. He likes to talk about sex, and Joseph obliges him. Women have changed since they were young: "Now, they tell you what they want you to do!" The movie is essentially about how Joseph finds his life is not over, how Charlotte begins to see larger possibilities for her own, and how Joseph's feelings for the downstairs neighbor (Maureen Stapleton) change from rudeness (he thinks she is nosy) to acceptance. It is all handled with great civility by Bob Balaban, who directed and co-wrote the screenplay with John McLaughlin. I suppose it is more or less obligatory that Joseph and Charlotte have a love scene, and they do, but it is handled with such gentleness by Balaban that it's not the intrusion it could have been. ("This isn't gonna kill you, is it?" she asks.) Just spending time with these people would have been enough.

Mueller-Stahl creates his character with great precision and restraint, and the early scenes are a reminder that a good actor can be fascinating even while doing absolutely nothing: We wonder what he's trying to hide. The subplot involving Ida is too mechanical for the subtlety of the story; we can see the payoff coming miles away, and when it arrives, it's perfunctory and unconvincing. Better to end on a minor chord, I think, with loneliness settling in again.

The movie is worth seeing, I think, for Mueller-Stahl, and for the blunt, outspoken charm of Lionel Stander, who died not long after he filmed this role, having played his death scenes here with an unsentimental acceptance I imagine he must have found quite fulfilling. 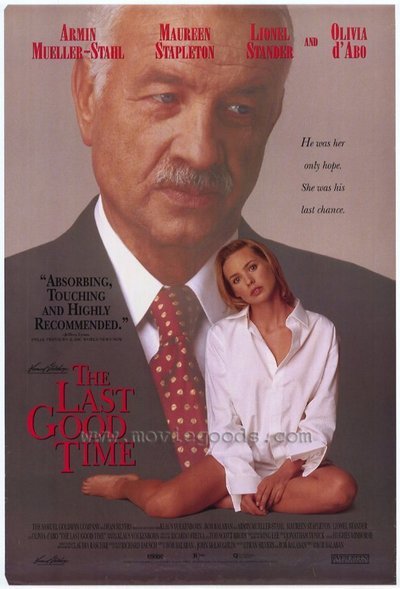