Over the decades, Ridley Scott has made several period films that are widely regarded as classics. More than several, if you expand your horizons to include films set in the future in the category of “period.” But with Scott period is not a guarantee of pleasure. Not that any of his pictures have lacked for quality if you associate quality with production value and snazzy shooting and cutting. But sometimes Scott fails to put a sense of life on the screen. While “Gladiator” and “Kingdom of Heaven” throbbed with purposeful vitality, pictures such as “Robin Hood” and “1492: Conquest of Paradise” seemed to lack much of a reason for being.

Scott’s “The Last Duel” may not be perfect but it never exhibits such inertia. This medieval intrigue comes courtesy of an unusual combination of talents: its screenplay, which is indeed based on true Medieval Events, is by Matt Damon and Ben Affleck (collaborating as writers, or at least as credited writers, for the first time since “Good Will Hunting”) and by Nicole Holofcener, best known for contemporary dramatic comedies with satiric bite and female-centered perspectives. Set in 14th century France, it casts Damon and Affleck in central roles in a story about egocentric men playing at power and subjugating women, all the while using cardboard conceptions of concepts such as duty, loyalty, and fealty to God as the pretexts for their petty, criminal actions.

After a prologue presenting the beginning of the title duel—a match to the death between squires and one-time friends Sir Jean de Carrouges and Jacques Le Gris (Damon and an especially tense-necked Adam Driver, respectively)—the movie takes a “Rashomon”-inspired structure. The first “Truth According To Chapter” belongs to Damon’s de Carrouges. In this episode Jean kicks things off by saving Jacques’ life at the Battle of Limoges. Then he goes on to do other noble things, despite the disdain in which he is held by his liege, Pierre d’Alençon (Affleck). He marries the beautiful daughter of a one-time traitor, goes off to battle without hesitation, that sort of thing. All the while watching Le Gris rise higher and higher in the court and swallowing his pride when Le Gris is awarded land and titles he believed rightfully his. They fall in and out with each other. But they fall definitively out when Marguerite, Jean’s wife (Jodie Comer), accuses Le Gris of rape.

And—I don’t think this actually constitutes a spoiler, but if you’re wary, maybe skip this paragraph—rape it most certainly is. The next chapter tells the truth according to Le Gris. In this account, Jean is a petulant, inappropriate whiner whose butt Le Gris is always covering; d’Alençon has little if any use for the squire. As for Marguerite, Le Gris “sincerely” loves her. This ruthless pragmatist is a man, and is thus, by his way of thinking, entitled to take her. When the devoutly Catholic rapist confesses to a priest, he admits not to rape but to “adultery.” Advising him on his upcoming legal troubles, another cleric tells him “Rape is not a crime against a woman. It is a property matter.”

The third chapter is billed as “The Truth According To Marguerite de Carrouges” and to drive a point home, the words “the truth” stay up longer on this title card than they do on the preceding. This is a lacerating sequence in which both Jean and Jacques are shown as chest-thumping brutes and opportunists. Jean believes he was tender to his bride; Marguerite’s section tells mostly of how he bickered with Marguerite’s father over her dowry. And so on. This telling repeats the rape scene, which is arguably necessary but uncomfortable—and of course that may be the point. What fascinates in these different perspectives are the small details—how one character remembers a brief kiss differently than another, how a pair of shoes removed daintily at the bottom of a stair in one telling becomes shoes falling off feet as the stairs are mounted in a panicked rush.

And it all leads up to the title duel which, even by the high standards set by Scott’s “Gladiator,” is what you’d call a humdinger.

There are plenty of nits one can pick about this picture. While Driver and Comer almost automatically fit into the movie’s world of lances and horses and castles (and various views of Notre Dame Cathedral while under construction), Damon and Affleck are harder period sells. Especially with Affleck going blond here. No performer commits any outright fouls—the screenplay has them all speaking an only slightly treated form of American colloquial English, so there are no Shakespearean pitfalls present. But it’s certain that connoisseurs of the “Sad Affleck” meme are gonna go to town once they can start getting screen shots from this movie.

Then of course there’s the “how feminist is it, anyway?” question. I could say “more than a little,” given that its observations pertaining to still-current issues land with some force and are arguably fortified in the context of medieval hypocrisy and barbarity. Nevertheless, while “The Last Duel” may be a partial model of mindfulness, it still obeys the requirements of the period action drama. This should surprise no one—this is a major studio multi-million dollar production overseen by a director whose work has only rarely skirted feisty indie territory. And let’s not forget that when he has, it’s been with just as mixed a bag of results as he’s had throughout his career—I’m thinking “Thelma and Louise” on the credit side and “A Good Year” on the debit.

When it’s delivering what the best of Scott and company's work can do—and the imagery, much of it grounded in a palette that could be a tribute to its anti-hero, whose last name translates as “the gray,” is frequently startling—the commentary pursued by the movie’s scenario isn’t entirely subsumed, but it’s not paramount, either. 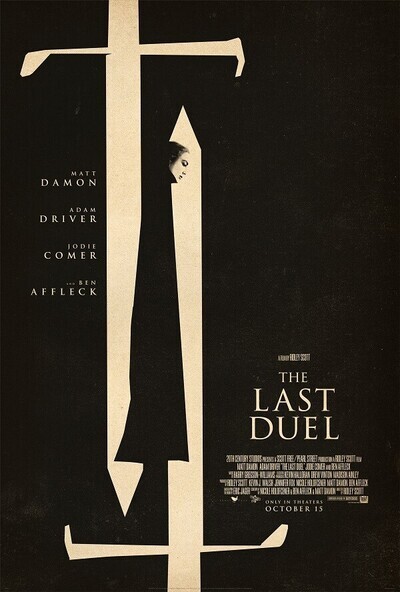