Matthew Vaughn’s “The King’s Man” is such an inconsistent action movie. It feels like half the production teams wanted to make “1917” and the other half opened the wallets for the British version of “Team America: World Police.” It’s a film that is too often trying to be a serious study of politics, warfare, and pacifism until it slaps you in the face with a reminder that this is all set-up to one of the broader, goofier action franchises of the modern era. Of course, one probably shouldn’t dig for messages in a film from this series but Vaughn and co-writer Karl Gajdusek keep highlighting them with very serious discussions of everything from colonialism to the human cost of war and it seems clear that the director wanted to make a dramatic World War I movie but then someone just crammed it into the Kingsman franchise. A charismatic cast and occasionally entertaining piece of action choreography keep it from complete tedium, but this odd hybrid of war drama and patriotic action orgy never finds its groove.

“Kingsman: The Secret Service” made it clear back in 2014 that Matthew Vaughn really wanted to make a James Bond movie, preferably one from the more ludicrously conceived era when 007 went to space. Interestingly, “The King’s Man” is a more traditional spy movie for most of its running time, focusing on intrigue and espionage more than gadgets and explosions. It also centers a man who clearly could have been Bond in an alternate universe, Ralph Fiennes, an actor who always gives his all, even when a film doesn’t quite know what to do with it.

Fiennes plays Orlando Oxford, the man who would found the covert operation that centered the first two films, and, apparently, play a major role in several events connected to World War I. The Duke of Oxford is an important ally of King George (Tom Hollander, who also plays Kaiser Wilhelm and Tsar Nicholas in an admittedly fun casting choice) in the days when it appears violent conflict is inevitable. Oxford basically starts his own spy network with the help of Shola (Djimon Hounsou) and Polly (Gemma Arterton), two geniuses who also happen to be servants at his estate, able to hide in plain sight as so many privileged white men ignore them. Yes, an interesting idea, but “The King’s Man” does almost nothing with it, although Hounsou and Arterton are two of the film's strengths (give them an action-driven spin-off).

Meanwhile, a villain who’s seen only from behind for almost two hours of the film’s running time schemes to plunge the world into chaos with the help of his own network of spies, including Rasputin (Rhys Ifans) himself. As the war becomes bloodier, Oxford struggles to keep his son Conrad (Harris Dickinson) from the front line, preaching pacifism and protection whenever possible. And yet the movie keeps pushing back against that until it almost seems to suggest that the horrors of this world will make even the most upstanding gentlemen into killing machines. Britain, f*ck yeah!

“The King’s Man” is a tonal mess. It opens with notes about the inhumane conditions from British soldiers in South Africa and a promise to keep a young Conrad Oxford away from a life of violence. In other words, it sets itself up as a commentary on colonialism and pacifism, two things that are bye-bye by the time Fiennes is parachuting out of a plane and fighting with a mountain goat in the final act. And it’s not like the tone is consistent, as Vaughn's film constantly jumps from a serious war movie with "something to say" to the goofy action aesthetic that fans of the first two movies will demand (and wish they got more of here). It is often stridently self-important in ways this franchise really can’t be. Grafting the over-the-top aesthetic of the first two movies onto fights with Rasputin and actual events from world history is somewhat clever, but why take it so seriously? It’s as if Vaughn and company heard the complaints about the misanthropy in the first two films and so went in the other direction ... until they realized that wasn’t as fun and they turned around.

Consequently, “The King’s Man” only works when it remembers its insane predecessors. A ludicrous scene wherein Rasputin licks Oxford’s leg wound that then leads to a clever action sequence almost brings the film to life, but then it crashes for about another hour until the finale. In that hour, there’s a scene in the trenches of World War I that's way more “1917” than “Kingsman: The Secret Service"; "King's Man" then further intensifies its inconsistency when its climax finally becomes a prequel to what fans know. Almost hysterically, the level-headed Oxford launches one of the worst plans in war movie history, but it leads to a fun, long cliffside sequence and some truly solid action choreography just before and after the villain reveal. About that: It should be illegal to disguise a (kind of obvious) villain for as long as this movie does. After the hundredth shot of the back of his head, I started to imagine funny possibilities. Maybe it’s Blofeld? Maybe it’s Begbie from “Trainspotting”? Maybe it’s The Riddler?!?! The movie lost me with this dumb gimmick.

I suppose that implies this movie ever really had me. It didn’t. This is an odd film, with no real idea of what to do with its undeniably great cast, and there’s something off-putting about how much it wants to have it all. Action films that are also about pacifism are a tough sell for anyone, but it's impossible for “The King’s Man.” 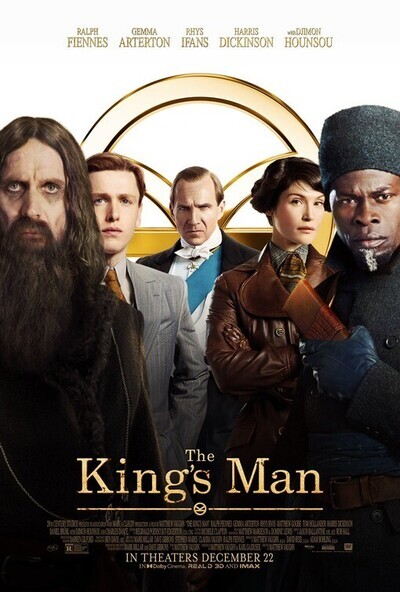 Rated R for sequences of strong/bloody violence, language, and some sexual material.

Writer (based on the comic book "The Secret Service" by)