"The King's Daughter" has been kicking around as a potential project ever since the book on which it is based, Vonda McIntyre's novel The Moon and the Sun, was published in 1997 (winning the Nebula over a little-known book called Game of Thrones). It's not hard to see why this story would have so much appeal. There is a strong female central character, and the book blends together historical fact and supernatural-fantasy, using the Versailles court of Louis XIV, the "Sun King," as backdrop. Jim Henson Pictures expressed interest in the story, as did Disney. Natalie Portman was attached at one point in the early aughts. None of it came to anything, although the property continued to change hands. The only reason this background matters is that "The King's Daughter," directed by Sean McNamara, released on this day in the year 2022, was actually shot in 2014, and slated for a 2015 release. To call this a "new release" is to stretch the truth into absurdity.

What has been going on for the last seven years? Why was this film held up for so long? The budget was a grotesque 40 million, with a massive infusion late in the game to improve the special effects. Maybe this caused some of the holdup, but not all of it. Besides, the special effects aren't particularly creative and/or eye-catching, and in some cases look shockingly amateur. Wherever it was spent, the money is not on the screen. It's a mystery as to what really went down here, and you can only squint at Hollywood Reporter articles for so long, wishing for an anonymous source to give the first-hand scoop. "The King's Daughter" has arrived, seven years behind schedule, and she must be dealt with accordingly.

Narrated by Julie Andrews, the film's fairy-tale "Once upon a time" opening shows the illegitimate daughter of the Sun King, Marie-Josephe (Kaya Scodelario), cavorting in the sea, as the nuns at the convent where Marie-Josephe has been stashed away stand on the beach ordering her to get out of the water. Marie-Josephe has no idea her dad is the monarch. She is also, apparently, a genius cellist. Meanwhile, at Versailles, after a failed assassination attempt on his life, King Louis XIV (Pierce Brosnan) takes the advice of an unscrupulous "doctor" named Labarthe (Pablo Schreiber), sending an expedition to find the lost city of Atlantis, capture a mermaid, bring her back to Versailles, and sacrifice her during the upcoming lunar eclipse. This, according to Labarthe, will give Louis immortality. At the same time, Louis sends for his long-lost daughter to be brought to the court.

Marie-Josephe and the mermaid (Fan Bingbing) arrive at Versailles simultaneously and form a telepathic bond. Marie-Josephe is assigned a lady-in-waiting, Magali (Crystal Clarke), and the two become besties instantly, although it's not clear why. (In the book, this relationship is far more complex.) Marie finds an unexpected ally in Jean-Michel Lintillac (Ben Lloyd-Hughes), the handsome sea captain who brought the mermaid back to court. Jean-Michel, Marie-Josephe, and the mermaid all yearn for the same thing: freedom.

This story has all kinds of dramatic potential, all of which is frittered away. Scenes are tossed together with little interest in visual coherence or narrative clarity. For example, the film spends a lot of time in the mermaid's underground cave at Versailles, and at one point, Jean-Michel mentions a "gate," and when he does, there's a sudden quick shot of a gate, a gate we've never seen before. It's not clear if the gate is actually there in the location or if it's somewhere else. The "gate" proves crucial to the story later on, so you can almost hear the panicked whispers at some point during the last seven years: "Oops, he mentions the gate, but how will they know what he's talking about? Insert a shot, I don't care where!" There are many such examples.

In another scene, Marie-Josephe climbs out of her window, fooling the guards placed at her door. We've already seen her window from the outside, perched in a slanted rooftop. She climbs over the ledge, and the next moment we see her running across the lawn. The film skips the "how the heck did she slide down a vertical stone wall?" question. Some of the sequences were shot at Versailles, and don't generate any interest, not even visually. This is no small feat!

The costumes are a hodgepodge of styles, but without any sense of purpose. The men are in pirate shirts and velvet vests, nods to the period, while the women are a mash-up of '90s Goth chick, "Dynasty," "Knot's Landing," and preening social media "influencers." This is not a complaint about anachronisms. It's a complaint about incoherence. Everything onscreen is information for the viewer, but what exactly is being conveyed? Why is Marie-Josephe wearing an unflattering strapless gown that looks like it belongs on a soap opera circa 1987, or a music video circa 1984? Is it because that style of dress gives her body an hourglass (i.e. mermaid) shape, underlining her connection with the fantastical creature? Make it make sense.

"The King's Daughter" is rated PG. Who is it actually for, though? Basic questions like "who is this for?" appear not to have been asked at any stage of the game, while panicked "tweaking" rendered the rest incomprehensible. It's a vast understatement to say that Vonda McIntyre's book deserved way better treatment than this. 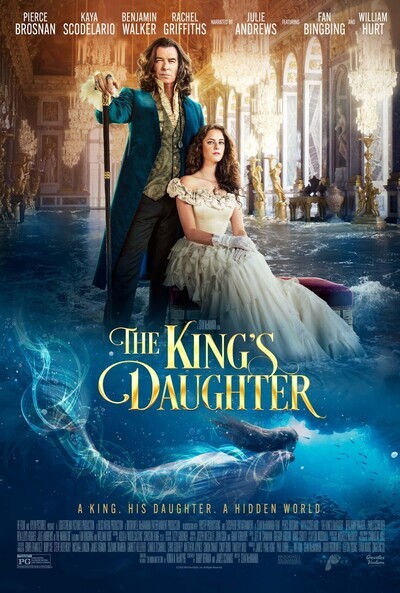 Rated PG for some violence, suggestive material, and thematic elements.