Sooner or later, Timothée Chalamet was bound to be enthroned with a meaty lead role in a historical epic. Among the most exciting actors of his generation at 23 years of age, he lands on the perfect canvas to marry his stage-imbued talent, soulful gravitas and undeniable movie-star charisma in “Animal Kingdom” director David Michôd’s “The King,” a smartly modern take on Shakespeare, loosely based on “Henriad.” It’s an expansive medieval picture that takes sophisticated liberties with the Bard’s work, expressly with an eye towards presenting history and its contemporary lessons in an accessible fashion to a new age group. And who can draw that crowd in better than young Chalamet with a most dedicated fan base? As the hard-partying, apathetic yet peace-oriented prince Hal who reluctantly becomes King Henry V of England in 1413, Chalamet manages to pull off something youthful and mature in equal measure, complete with a brooding gaze and a serious haircut.

But before he gets perplexed and devoured by his inherited power, and before the fabled Battle of Agincourt arrives, we naturally meet Prince Hal first. Sporting Chalamet’s famous, mid-parted locks, Hal unreservedly womanizes and boozes alongside his equally nonchalant friend and trusted mentor Falstaff (Joel Edgerton, also a co-writer with Michôd), a relegated knight now involved in small-time dealings in Eastcheap. The ruthless, war-mongering Henry IV (a severe and bad-tempered Ben Mendelsohn, aptly intimidating) is still in power, though it’s unclear for how much longer due to his failing health. The joint screenplay from Edgerton and Michôd sadly rushes through this bit, although not before we can take in the body count on a massive battlefield and get a shot of the unruly nobleman Hotspur (Tom Glynn-Carney), whom Hal would duel against later, on the royal road to become his father’s inevitable successor. It just happens in a mad rush—before we know it, Henry IV goes the way of all flesh and his beautiful boy halfheartedly comes of age under the weight of a shiny crown.

“The King” slashes through the heart of this hesitation, giving us a clear picture of a young person split between his newfound responsibilities and pacifist-leaning beliefs. Making this quiet, different version of Henry V his own interpretation (instead of, you know, a poor imitation of Sir Laurence Olivier’s definitive performance), Chalamet excels at emoting sharply through his eyes. When he has words to spare, it helps that the co-scribes had significantly (though respectfully) smoothened Shakespearean language for this side of the 21st Century. Would Hal just become his dad whom he once loathed (an eternally-relevant existential question at the center of many therapy sessions today)? Can he trust anyone? And what about that condescending ball sent by the Dauphin of France (a hilarious, scene-stealing Robert Pattinson)—should he really take offense like he’s advised to?

Also sidestepping a poorly attempted replication of the ultimate version of his character (Orson Welles in “Chimes at Midnight,” that is) Edgerton as a larger-than-life, irritable yet subtle Falstaff wisely reminds Hal the reality of his situation: “A king has no friends. Only foes and followers.” Case in point—growing into his throne with a series of dubious decisions, Hal does abandon his one true ally Falstaff for a while, making us sorely miss the gifted Australian actor with pronounced roots in Shakespeare and theater.

Thankfully, an array of impressive talent comes to the film’s rescue in small but vital supporting roles. (A notable feature of the script is making each side character truly count regardless of his or her screen time.) There is Queen Philippa of Denmark (Thomasin McKenzie), who, in a brief scene, advises her brother Hal on his so-called supporters’ ulterior motives. There is also the Dauphin’s sister Catherine de Valois (Lily Rose-Depp, terrific in a late-arriving sequence)—putting a feminist turn to the events (and perhaps hinting a tiniest Trump allegory), she boldly confronts Henry V with his weakness to be riled up like a young boy in a playground. And again, there is the haughty Pattinson, who is destined to become the Internet’s next most popular gif with hysterical observations on the English language and male genitals.

Intimate when navigating the nooks and crannies of the palace, and manifestly a big-budget movie when out in open meadows, “The King” shines in the hands of cinematographer Adam Arkapaw, despite its dark hues and shadowy look that fittingly paints a critical picture of combat and hostility. Complementing Arkapaw’s mud-spattered palette (that will hopefully not lose its appeal on a confined Netflix screen) is Nicholas Britell’s grand, woodwinds-heavy score and a skin-splitting sound design that makes every clatter and clang count when heavy armors face off on slippery Agincourt grounds—the war scenes are just as impressive as that of “Braveheart.” With weighty things to say about contemporary and corrupt institutions of power and even dangers of male hegemony, Michôd’s non-preachy “The King” comes with philosophical heft and visual authority to match. 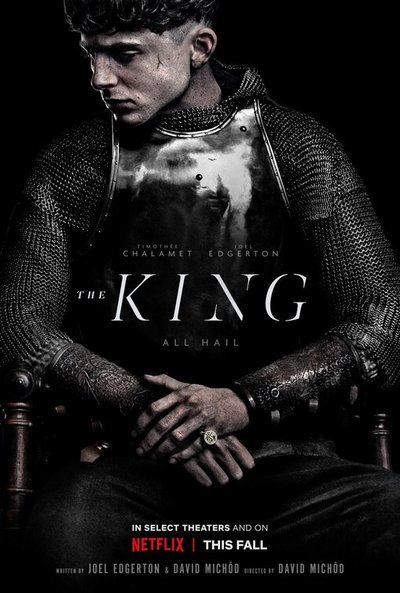 Rated R for some strong violence, and language.

Robert Pattinson as Louis, the Dauphin of France

Lily-Rose Depp as Catherine of Valois