“The Ivory Game” is a documentary that plays with the gripping pacing and glossy production values of a suspenseful, international thriller. Unfortunately, the story it’s telling is all too true—and relevant.

Directors Kief Davidson and Richard Ladkani, their crew and various subjects spent 16 months undercover investigating the killing of African elephants for their tusks and the smuggling of ivory to China, where selling the precious material is legal but corrupt, black-market business practices still exist nonetheless. They hop from Tanzania, Kenya and Zambia to China, Hong Kong and Vietnam, with a brief stop in London in between.

The vast aerial views of sprawling, dramatic wild lands and glittering urban skylines are breathtaking; the intimate images of elephants who’ve been cruelly killed and left to decay in the baking sun are heartbreaking, as is the sight of their loved ones surrounding them in silent mourning.

The filmmakers try to depict the complexities of the multibillion-dollar ivory trafficking industry from every possible angle, which is admirable and must have been a huge challenge. But their approach also gives “The Ivory Game” a scattered feel, with individual storylines perhaps not providing as much of a thorough or emotional impact as they could have. It’s easy to imagine the film expanded into a documentary series, with each key player getting his or her own episode: the Chinese investigative journalist, the Zambian intelligence official, and so on.

These figures and many more help put a face on a massive crisis, providing a human entryway to a complicated subject for viewers halfway around the globe. But the numbers alone are staggering: Poachers kill an African elephant every 15 minutes. The African elephant population has dropped 97% in the past 100 years. At this rate, they could be extinct altogether in the next 15 years.

Davidson & Ladkani drop us right into the middle of the fight to save these majestic creatures from the very start: A nighttime raid in Tanzania, complete with night-vision images and a dramatic score, sets the tone. The target is an elusive figure known as Shetani, or The Devil, a poacher who’s responsible for the deaths of 10,000 elephants alone. We then see the efforts of Craig Millar, head of security for the Big Life Foundation in Kenya, as he flies around the massive property he patrols, responding to yet another report of a slain elephant.

From there, we follow Andrea Crosta, the founder and lead investigator of the website Wildleaks, as he secretly shoots video of Chinese ivory stores. Their shiny display cases are filled with ornately painted and carved pieces that sell for hundreds of thousands of dollars and serve as a status symbol for those who can afford them. His hidden-camera exchanges with salespeople—those who run both legal and illegal businesses—are often stunning in their brazenness.

But a couple other subjects the directors follow in “The Ivory Game” are the most compelling. One is Hongxiang Huang, a Chinese investigative journalist who wants to expose ivory trafficking for its insidiousness. He laments that no one ever suspects him when he goes undercover because “unfortunately, they just never imagine a Chinese could be on the right side of the ivory and rhino hump battle.” The other is Georgina Kamanga, head of intelligence for National Parks and Wildlife Zambia. She’s tough and decisive—a rare woman in a man’s world—but she also allows herself to be emotionally vulnerable at the devastating sight of an elephant that’s been freshly slain and decapitated.

Moments like that lend “The Ivory Game” a pervasive air of sadness within its urgency. But perhaps, as in other recent animal-advocacy documentaries—“Blackfish” (about abuses at SeaWorld) and “The Cove” (about Japanese dolphin hunting)—the resulting feeling of outrage will spur viewers into action. 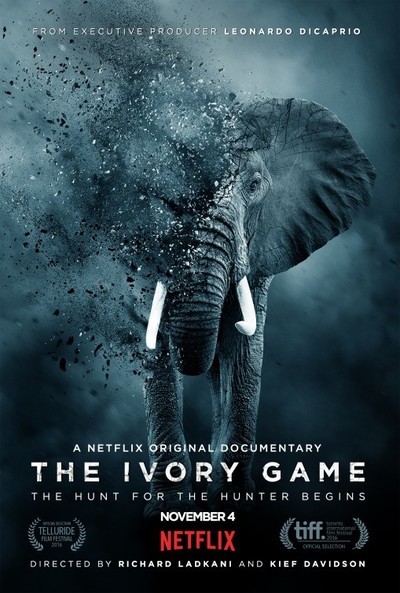