As Texas oilman Jim McNeely sets about making his fortune in “The Iron Orchard,” he meets a variety of colorful characters. Hardened, tough men who derisively call newbies to the parched oil fields “boll weevils” and who talk in an almost nonstop string of clichés. “Sorry-ass,” “two bit,” “you’re going down, hot shot,” “gold-bricking son-of-a-bitch,” “sorry son-of-a-bitch,” etc. It got to be a chore to keep track after a while, so I quit, but later points in the film yield such never-before-uttered gems like the observation that the oil game “rewards the lucky ones with wealth and power beyond their deserving.”

Directed by Ty Roberts from a script he co-wrote with Gerry De Leon, “The Iron Orchard” sees young man Jim (Lane Garrison) setting out to find his fortune for what seems a particular reason. In flashbacks, we see him rollicking with pulchritudinous local honey Mazie (Hassie Harrison) and being told by Mazie’s mom that her girl won’t be marrying any grocery clerks. Taking a job with Bison Oil, Jim suffers the slings and arrows of bullying vets while also falling for Lee (Ali Cobrin), the wife of a colleague. Prudent in saving his money but less so in his unruly passions, he wins over the unhappy Lee (a never really-followed-up on scene depicts her distress by having her do a kind of Diane-Ladd-in-“Wild At Heart” thing with her lipstick) and together they run off so that Jim may Make His Own Way and do a lot of oil tycoon stuff.

Despite glistening montages of gushing rigs and fancy lifestyle accoutrements (this is a movie wherein the period detail is rendered by, among other things, vintage cars and trucks that always look as if they just drove off from the car wash, which practice kind of defeats its own purpose), Jim never wholly takes off, in part because of the aforementioned unruly passions. Too young at the time to realize that you shouldn’t marry another woman when you’re still having flashbacks about the girl you left behind, Jim is soon confronted by the girl he left behind, and soon enough he’s having flashbacks about Lee. Not quite, but almost.

This movie doesn’t have a “based on a true story” opening title card. It does have a few title cards telling a very brief history of Texas oil, including how that oil fueled the military of World War II — funnily enough, that war isn’t so much as mentioned again in the film, despite its being set in a time frame between 1939 and the late ‘50s; I’d have imagined it might have had some impact on the proceedings—and so on. As it happens it is based on a novel (this isn’t made clear in the credits) pseudonymously written by Edmund P. Van Zandt, and based on the lore of that fellow’s prominent Texas clan. Actor Ned Van Zandt, Edmund’s son, has a role in the movie, and its final credits feature what seems to be period home movie footage of a fellow in the oil game, and his family.

So, because I don’t like to offend real people or their relatives if I don’t have to, I hesitate to offer my appraisal of Jim McNeely as a film character and specifically his place relative to the pantheon of Great Cinematic Oilmen. I am afraid he is badly outclassed. Jett Rink, the wildcatter turned drunkard Rebel Rockefeller in the classic “Giant” (he was played by James Dean, you know) was an iconic threat to the established order. Daniel Plainview of “There Will Be Blood” fame (Daniel Day-Lewis, what a guy) was a villain of near-cosmic proportion. Jay McNeely, it turns out, is just kind of a jerk. One who doesn’t even really get the “Ambersons”-style comeuppance he’s so blatantly begging for by the movie’s climax. As competently put together as this movie is, it imparted to me no sense of a higher calling, and thus left me unmoved. 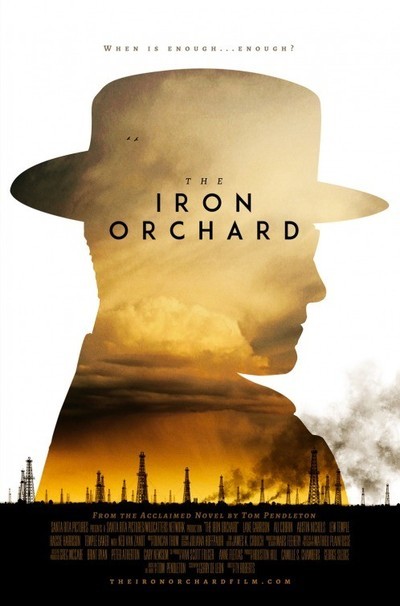