During these last, lazy days of summer, there isn’t a whole lot to do. Still, you’re probably going to want to RSVP “no” to “The Invitation.”

It had such potential, too. Director and co-writer Jessica M. Thompson establishes an unsettling mood that suggests we’re about to enter a dark and twisted world. But then eventually, her film is just dark—as in, it’s hard to see what’s happening, with herky-jerky visual effects that are especially off-putting. And when the twist comes as to what’s actually going on, it’s like: Really? That’s it? The trailer pretty much gives it away (as most trailers do), but we’re all about having the best possible moviegoing experience around here—even if it is a mediocre movie—so we’ll do our best to avoid spoilers.

Nathalie Emmanuel has an appealing presence, though, as Evelyn—or Evie, as she prefers to be called. The “Game of Thrones” actress is a stunner, of course, but there’s also a no-nonsense naturalism to her delivery that makes her feel accessible. So when things go sideways on her too-good-to-be-true getaway to the English countryside, we remain on her side throughout.

Evie is a struggling New York artist who works as a catering waitress to pay the bills. At an event for a new DNA testing company, she snags a swag bag and takes the test inside; after the recent death of her mother, she feels alone and adrift and seeks a sense of identity. Turns out, she’s got a bunch of cousins, and they’re all British, and very white. But the script from Thompson and Blair Butler merely skims the surface of exploring the racial implications of this connection. When an overly enthusiastic second cousin (Hugh Skinner) invites Evie to join him for a posh family wedding at a decadent English estate—and she arrives and realizes uneasily she’s the only person of color besides the maids—there’s hope that “The Invitation” might have something more relevant and substantial on its mind along the lines of Jordan Peele’s “Get Out.” No such luck.

Her best friend back home, Grace (an amusing Courtney Taylor), is appropriately skeptical, but Evie gets swept up in the sense of belonging. Sure, the maids are all wearing uniforms with numbers on them. That’s a little weird. And the butler (Sean Pertwee) is a condescending prig. And there’s a hidden key that unlocks the library that’s off-limits. But still! The young lord of the manor, Walter (a seductive Thomas Doherty), is super hunky with his piercing blue eyes and his square jaw and his shirt unbuttoned one button too many. And he isn’t one of Evie’s relatives, which is always a plus.

As the three-day festivities unfurl, Thompson relies way too heavily on cheap jump scares to put us on edge, which is a shame, because there’s enough atmosphere within the film’s initial mystery. A spa day for Evie and the imposingly glamorous maids of honor (Stephanie Corneliussen and Alana Boden) is staged and paced particularly well. And she could have taken more time in building suspense to the big reveal, which occurs at an ominous, masked dinner party that’s like something out of “Eyes Wide Shut.”

But then everything changes really suddenly, really quickly, and “The Invitation” becomes a different movie—a sillier one. The shift into campier territory is jarring and even a little disappointing. It felt like Thompson was onto something here. Instead, she revisits some extremely familiar material in uninspired fashion.

The costume design is fabulous, though—the work of Danielle Knox. So even when Emmanuel is forced to do a tough juggling act between horror and comedy, at least she looks great in the process. 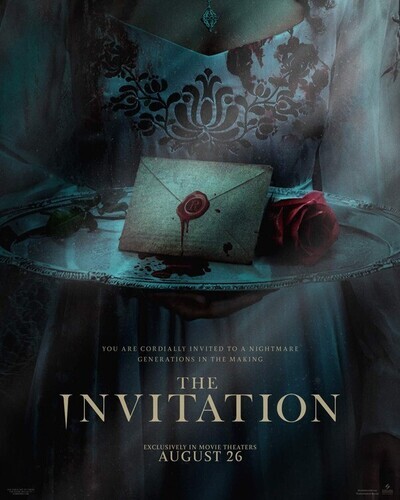