The year is not even two weeks old but it already has one electrifyingly brilliant film to its credit. Ziad Doueiri’s “The Insult,” which is shortlisted for the foreign-language film Oscar, plunges into the thicket of Lebanon’s sectarian divisions with a riveting courtroom drama that shows how even minor interpersonal tensions can boil over into national traumas. While the issues it engages are timely and important, the film’s claim to fame really comes from its terrific accomplishments on every front, from writing and directing to acting and cinematography.

Doueiri, a native of Lebanon who studied in the U.S. and served as Quentin Tarantino’s camera operator on “Pulp Fiction,” has been an important voice in Middle Eastern cinema since his autobiographical debut “West Beirut” (1998). Like his 2012 terrorism-themed drama “The Attack,” which he filmed in Israel and was duly arrested in Lebanon for that act, “The Insult” shows that he’s a gutsy filmmaker who not only will venture where others fear to tread but also has skills that put him on a par with any A-list Hollywood writer/director.

The filmmaker came of age in Lebanon in the 1980s when the country was riven by civil war. While it has been nominally at peace since then, it still houses different ethnic and religious groups that bear longstanding animosities toward each other. Those at the center of “The Insult” are Christians, who comprise 40 percent of the population, and Palestinians, refugees who have been in Lebanon for many years and now comprise ten percent of the population. (The film was written by Doueiri, a Christian, and Joelle Touma, a Muslim.)

One can learn a lot about these groups and contemporary Lebanon from “The Insult,” but it’s also possible to go into the film knowing little about the situation depicted and still come away completely captivated. That’s because the conflict at the drama’s center is so personal, visceral and universally recognizable; it could take place in Mississippi, Beijing or Bogota.

The film’s title might actually have been plural, since its story depicts a cascading series of insults, but the initial one takes place on a Beirut residential street. Tony Hanna (Adel Karam), a thirtysomething mechanic with a pregnant wife, is watering plants on his apartment’s balcony when he inadvertently splashes a construction crew on the street below. The crew’s foreman, Yasser Salameh (Kamel El Basha) notices there’s an illegal pipe on Tony’s apartment and offers to fix it. After Tony slams the door in his face, Yasser has his crew fix the pipe anyway. When Tony sees this, he smashes the new pipe. Witnessing the destruction from the street, Yasser yells up at Tony that he’s a “fucking prick.”

Those two words set the story in motion. One man shouts an insult at another, who’s infuriated and demands an apology. The other man is urged by his boss to apologize so that everyone can move on. Initially he seems inclined to do it, but when the time comes, he’s unable to. Soon things escalate and the men end up in the first of two courtrooms where they will face off against each other.

The confrontation surely has a lot to do with the two male egos involved. Tony is a brawny hot-head, the kind of guy you can imagine getting into bar fights every other weekend. In other words, a real prick, as the man said. For his part, Salameh is a taciturn, grim-faced guy whose stoic mien seems to cover a deep sense of grievance and resentment.

Does it matter that Tony is a right-wing Christian and Salameh a Palestinian? In this context, it matters a lot. In the early scene where Tony slams his door in the face of a man who’s offering him some free help, there’s no mention of religion, ethnicity or politics; but when you think back on it, you can easily surmise that Tony wouldn’t have done this if he’d been addressing a fellow Christian. When Salameh goes to Tony’s garage to apologize, the TV is blaring a right-wing Christian politician lamenting the presence of Palestinians in Lebanon. As the conversation quickly dissolves into hostility, Tony snarls, “I wish Ariel Sharon had wiped all of you out,” meaning the Palestinians. For that, Salameh hits him in the gut, assuring that the battle will have a bitter future in the legal arena.

By the time their second trial happens, each man has become a cause for their respective people. Tony is represented by a large legal team headed by a famous Christian trial lawyer named Wajdi Wehbe (Camille Salameh). Salameh’s defense, meanwhile, is mounted by Nadine Wehbe (Diamand Bou Abboud), a brilliant young attorney who seems to exemplify the opinion we hear that it’s “trendy” for liberal and left-wing Christians to take up the Palestinian cause. She is also, not incidentally, Wajdi Wehbe’s daughter.

As the second trial unfolds, it provokes violent outbursts both inside and outside the courtroom, and sensational media coverage stokes sectarian passions across Lebanon. With their combination of personal and political animosities, the film’s highly charged courtroom scenes prove both riveting and revelatory. Much of their power obviously results from Doueiri’s skills as director. No doubt having started out as a camera operator gave him a sharp sense of visual style, because his fluid camerawork is both precise and endlessly dexterous.

He is also great with actors. While the film’s supporting cast includes some striking performances, especially Rita Hayek as Tony’s wife, the four leads mentioned here are all superb (El Basha won the Best Actor prize at Venice). Altogether, the accomplishments of “The Insult” place Doueiri in the company of such masters of politicized suspense as Costa-Gavras and Asghar Farhadi. A great director already, he is surely one to watch in the future. 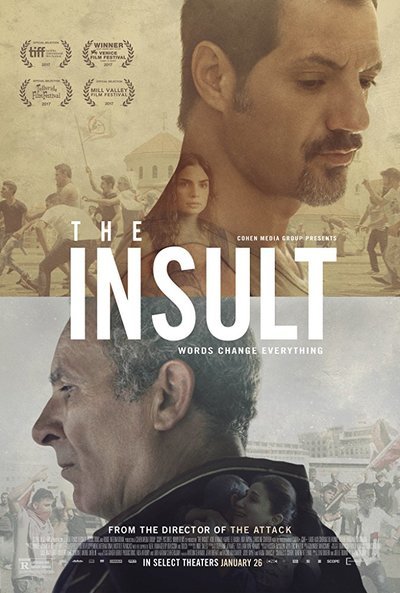 Rated R for language and some violent images.