Elegance Bratton's directorial debut "The Inspection" is a boot camp movie that follows the standard arc of such films: a troubled young person enlists (or is drafted), has a rough training period in which he is targeted with cruel special attention by a drill instructor, considers quitting, but eventually decides to stick it out and make it to graduation, harnessing reserves of strength he didn't know he had.

But this version of the tale is based on the filmmaker's own experiences as a gay Black man who joined the Marines after the 9/11 attacks. That means that even though you're watching variations of the usual story beats, they have different meanings, and inspire more conflicted feelings.

The hero, New Yorker Ellis French (Jeremy Pope, brilliant in "One Night in Miami"), just got out of jail. His mother Inez (Gabrielle Union) seemingly resents her son for his self-destructive, directionless tendencies; the movie's first line of character dialogue, delivered by Inez to Ellis when he shows up at her front door asking for his birth certificate so that he can enlist, is, "Are you in trouble?"

Inez also tells him to consider his birth certificate "null and void" if he continues on his present course, and it's clear that she's not talking about him mustering out and getting a job. The deeper truth of this relationship is that Inez despises her son's sexual orientation. Not only does Ellis carry that primal rebuke into boot camp, it's amplified by the setting, time period, and people. America has never been hospitable to men like Ellis, and during the aughts the military was officially operating under the "don't ask, don't tell" policy, but still fueled by centuries of institutionalized homophobia. There's anti-Muslim sentiment at play, too, with Middle Eastern recruit Ismail (Eman Esfandi) becoming the go-to object of jokes about all the "terrorists" the Marines are eventually going to kill. Misogyny, too: the recruits are berated as women and informed that the Marines are the part of the Navy that has balls.

Ellis is an intuitively compassionate person—the kind of man who offers an anxious fellow recruit a donut on the bus to camp, and knows how to mirror others when they're distressed—so he's several kinds of fish-out-of-water here. The head drill instructor is a Gulf War veteran with four confirmed kills named Gunnery Sgt. Laws (Bokeem Woodbine). He zeroes in on Ellis, just as Louis Gossett Jr.'s character did Richard Gere's character in "An Officer and a Gentleman. "I will break you, I promise," he tells the assembled recruits. "I will be the nightmare that keeps you from closing your eyes at night." He inflicts custom-tailored emotional and physical abuse on Ellis that escalates to the point where even Law's fellow instructors warn him that he's gone over the edge.

Is there an element of internalized self-loathing in Laws' targeting of Ellis? Possibly. That aspect was at play in another boot camp film that echoes throughout "The Inspection," "A Soldier's Story," about an investigation into the murder of a Black drill sergeant who took out his own internalized racism on his recruits. Woodbine tends to be the MVP of any cast he's in, and he's magnetic and terrifying as Laws, but it's an opaque rather than transparent performance that seems to invite us to project our own issues onto the character. The story that Laws tells to the other instructors explaining his gratitude to the Marines and America doesn't hint at any simplistic one-for-one explanation of why he fixates on Ellis.

Nevertheless, sometimes there are indications that Laws is punishing Ellis as a way of symbolically destroying suppressed tendencies in himself. But this is less an outgrowth of Woodbine or the character's dialogue than of how the film channels (deliberately, it seems) another classic of the genre, Claire Denis' "Beau Travail," a dreamlike, voluptuously homoerotic French Foreign Legion drama that loosely retold Herman Melville's Billy Budd, in which the closeted Master-at-arms John Claggart torments the title character for being charming, handsome, and desirable. When Ellis (whose last name is French!) dreams and fantasizes sexual encounters with other recruits, Bratton and his cinematographer Lachlan Milne light the action in hot, high-contrast single-colors, as if it were occurring in a fabulous nightclub (or a softcore flick), and there are many Denis-ian moments of furtive glances and long looks at athletic physiques. When Laws inspects the interior of an empty rifle clip, he does it slowly and lasciviously, with his index finger. Which is another way of saying that a particular current courses throughout the movie even when the script doesn't make a point of tapping into it.

But what are we to make of the film's second half, in which Ellis rallies and not only survives boot camp but helps others get through it? There's no outward indication that the filmmaker wants us to think that the experience (much less Laws' role in it) was entirely beneficial, or that the Marines somehow "made a man out of" Ellis. But more than a hundred years of boot camp movies that were almost exclusively about straight men, and nearly always ended triumphantly, ensure that whenever "The Inspection" reaches familiar milestone moments (such as the hero deciding not to quit, or putting on his graduation uniform) we at first respond to it un-ironically, even though everything we've seen Ellis go through until that point demands a nuanced reaction.

The film doesn't seem sure quite certain how to feel, either. There are stretches (particularly in the final section) where "The Inspection" whipsaws between critiquing the institution and wanting us to be thrilled that Ellis excelled despite others' efforts to drive him out, or into an early grave. It's an inversion of the famous Groucho Marx one-liner: he wants to belong to a club that doesn't want somebody like him as a member, and gets his wish.

It's not just a matter of Ellis proving that he's stronger than the worst people in his life, which is healthy; there's something more grim and troubling happening beneath, and it's hard to tell how aware the film is about that deeper, more ambivalent (or ambiguous) current. For all its attention to social and political and psychosexual conditioning mechanisms, "The Inspection" lacks clarity. It's a beautiful, heartfelt muddle, made by somebody with a true film sense—and great collaborators, including editor Oriana Soddu, who begins and ends shots slightly before or after most editors would, a technique that lends every moment an element of surprise.

It's possible that, for all the time that passed between the film and the events that inspired it, the director doesn't quite have the emotional distance to put the entire foundational ordeal in sharp relief, or the analytical ruthlessness to rip it open and show the gears and wiring, not just the hard surface, of the machine that wants to crush Ellis.

To be fair, though, some experiences are so profound (and/or scarring) that they elude explication. "The Inspection" is about that sort of experience, which translates far beyond boot camp and resonates through our lives, until the final trumpet fades. Ellis' mom isn't sentimentalized or softened, even at the end, but "The Inspection" is still dedicated to Bratton's own mother. It's to the film's credit that we can interpret that as we wish. 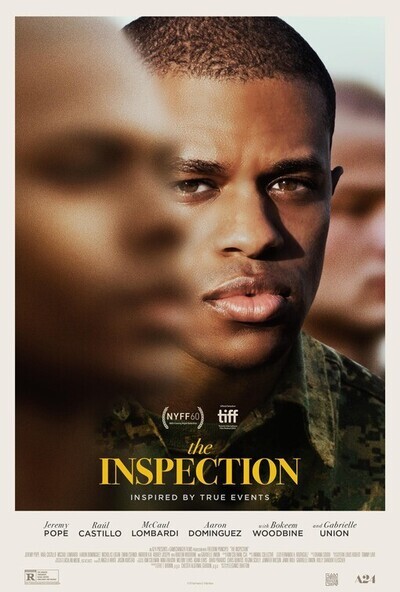 Rated R for language throughout, sexual content, some nudity and violence.