In the opening credits sequence of "The Incredible Jessica James," written and directed by Jim Strouse, Jessica James (Jessica Williams), a twentysomething aspiring playwright living in Brooklyn, dances around on her apartment roof (after having danced through the hallways and up the stairs to get there). Her dancing is wild, athletic, funny, sometimes clumsy, always exuberant. Even if you go into the film unfamiliar with Williams from her gig as a correspondent on "The Daily Show," she's an infectious and likable presence immediately. She's not trying to show you how well she can dance. She lopes around like a big kid on the first day of summer vacation. She's letting off steam, cracking herself up. This sequence announces the film's intentions: "The Incredible Jessica James" is an old-fashioned star vehicle. It doesn't have much meat to it, and it borrows from various young-artist narratives, so that in some cases you might think, "I've seen this all before." Yes. You have. But not with a leading lady like Jessica Williams. She's something else entirely.

When Jessica James talks about theatre, her face lights up from within. She believes in the transformation that live theatre and plays can provide. She believes in the power of storytelling. One wall of her apartment is covered with Playbills and posters, quotes from Lillian Hellman on scraps of paper, a wall of inspiration. Another wall is covered with rejection letters from her applications for fellowships, grants, theatre workshops, etc. It's a pretty accurate representation of the landscape of a beginning artist's life. Jessica isn't losing faith, not exactly. But the disappointments are beginning to wear her down. She makes a meager living teaching acting to kids at a local theatre company. But is that all there is? Her existential crisis is deepened by a recent breakup with a supportive boyfriend (Keith Stanfield). She can't get over it. Even worse, she broke up with him!

Over the course of the film, Jessica will continue to send out applications, each visit to her mailbox a journey of anticipatory heartbreak. She gets caught up in the life of one of her students, a smart sensitive girl (Taliyah Whitaker), whose parents' custody battle inhibits her participation in the class. (Jessica starts a confrontation with the girl's mother obnoxiously, bluntly: "Listen, Shandra's Mom ...") She goes out dancing with her best friend, an improv comedian named Tasha (Noël Wells). She tries to start dating again and it's mostly disastrous. A dinner with a recently-divorced guy named Boone (Chris O'Dowd) seems to have potential, but they're both so bruised by their former relationships that it's like there are two other people sitting at the table with them.

The relationship with Boone is really the heart of the film. The two characters are awkward, honest, funny. The first time he makes her laugh on their first date is what onscreen romance is all about. It doesn't matter that you've seen it a hundred times. You haven't seen it with these two particular people. Her "persona" is so tough and confident that it can be off-putting, slightly scary. Her laugh at his joke bursts out of that shell, and with it comes a softening, a vulnerability. There's a complexity at work there, in the writing and in the acting, an understanding that coupling up, especially once you've got some miles on you, is rarely a matter of flowers and hearts and chocolate and jewelry. People get hurt. People bring those hurts with them into the next scenario.

The film isn't without its disappointments, the main one being that Jessica is a playwright, with credits to her name, and yet we never learn anything about her writing. What are her plays about? What's the style? What kinds of stories does she tell? What play did she see or read that made her think, "This is what I want to do with my life"? She has a gigantic binder stuffed with all of her work. When Boone reads her plays, his only comment is, "You are complicated." That's it? I never doubted for a second that Jessica Williams the actress knew what her character's scripts were about. But we the audience never learn about them. The other element of the film that doesn't quite work are the fantasy sequences involving run-ins with her ex-boyfriend. Stanfield is such a versatile actor, but the "device"—clearly "Annie Hall"-ish in its intention—is too sloppily conceived to really come off.

Overall, though, these are minor complaints. What matters is watching Williams. She's not a one-trick joke machine. She's not an "attitude." She's a gifted actress, smart and vulnerable, funny and tender, unafraid to show her character's shortcomings. Nothing is difficult for Williams in acting. She never strains. It's a pleasure watching her think about things, watching her process things. "The Incredible Jessica James" works, primarily, because of its devotion to its lead actress. She's the reason why we're all there.

Before Trevor Noah took over the The Daily Show from long-time host Jon Stewart, there was a clamoring for 25-year-old correspondent Jessica Williams to get the prized spot. Williams Tweeted out in response to the groundswell of fan support: “Thank you, but I am extremely under-qualified for the job!” Her comment was greeted with disappointment, a little bit of concern-trolling, and bafflement at what was perceived as a statement of insecurity from this strong capable woman. But Williams wanted something else for herself. In a recent NY Times profile, Williams said, “I know what I’d be incredible at, and I know what I wouldn’t be as great at. I didn’t want to insert myself into that narrative to please everybody else. I was listening to my heart and making sure I honored what I was truly excellent at.” In many ways, self-knowledge is more important—and even harder to come by—than talent. Even with its flaws, "The Incredible Jessica James" is so entertaining, so touching even, that it's evidence alone that she made the right choice, the smartest choice for her multiple gifts. In years prior, Jessica Williams would have gotten roles playing funny sidekicks. Kooky best friends. Not anymore. She carries the film. She's the center of every scene.

In 1966, film critic Pauline Kael reviewed "Funny Girl," announcing: "Barbra Streisand arrives on the screen, in 'Funny Girl', when the movies are in desperate need of her."

She could have been talking about Jessica Williams. 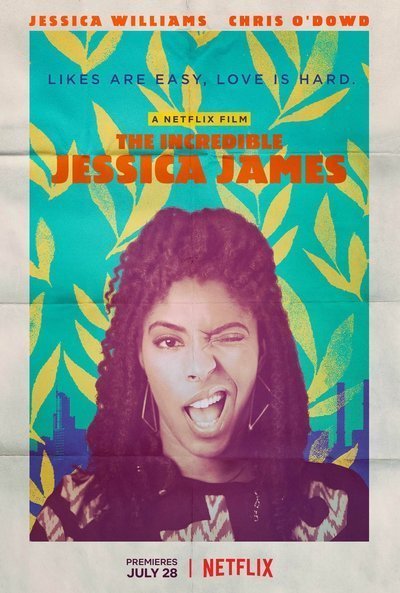