The House with a Clock in Its Walls

"The House with a Clock In Its Walls"—horror director Eli Roth's first attempt at a kid-friendly horror-fantasy—is basically watchable. Granted, it is more than a little familiar: you'd be forgiven if the movie's trailer, which does a decent job of capturing the film's doofy mood, seems like an ad for a new movie based on R.L. Stine's kiddy horror "Goosebumps" series.

But the plot—about Lewis (Owen Vaccaro), a newly orphaned pre-teen who becomes a powerful warlock with some help from kooky uncle Jonathan (Jack Black)—is mostly adequate. And the scene-to-scene pacing is patient enough to establish the importance of certain key plot points and character dynamics. And the menagerie of computer-generated monsters, which includes talking dummies and sentient jack-o'-lanterns, are slick-looking. So if you're not paying too much attention—maybe you're distracted by how much money you paid for your kid's concession stand treats, or maybe you're watching the film alone at home—you might be able to overlook the programmatic nature of "The House with a Clock In Its Walls."

Then again, you might dislike "The House with a Clock In Its Walls" if you focus on the film's potty humor—we get it, the flying topiary lion isn't house-trained—and showy performances, especially Black, who seems to dominate every frame he's in. But only the latter is seriously distracting. Black co-headlines the film with Cate Blanchett—who plays Mrs. Zimmerman, Jonathan's spinster neighbor—another actor known for her vamping. Thankfully, Blanchett eventually proves that she's still capable of sharing the screen, in this case with Vaccaro (whose performance is a little all over the map, but mostly OK).

Roth otherwise fails to get his actors to perform in the same scene. This wasn't really a problem in his earlier horror films, like the first two "Hostel" movies, the proudly perverse "The Green Inferno," and the silly "Knock Knock." But it is a problem with both of Roth's 2018 releases (even I won't defend his "Death Wish" remake). Roth lets Black, who often looks like a soulless Zero Mostel robot, rely on so many of his signature tics and fallback mannerisms that it soon becomes hard to overlook the diva-ish nature of Black's performance. This is immediately apparent in the scene where Jonathan invites Lewis into his magical home, the one haunted by a malevolent, ticking doomsday clock. Here, Jonathan playfully butts heads and ostensibly has a screwball rapport with Mrs. Zimmerman. They trade insults, but are really the best of friends! In theory. Their dialogue isn't great, but Black often seems to be talking past Blanchett.

From there, Lewis ostensibly takes center stage for a rote story about yet another pre-teen misfit who doesn't fit in at his new school, misses his dead parents, and then abuses his newfound magical powers in a vain attempt at impressing his fair-weather friend Tarby (Sunny Suljic), a grade-school loner who takes a shine to Lewis, but then quickly loses interest.

Screenwriter Eric Kripke, adapting John Bellairs' novel, could have done more to flesh out Tarby and Lewis' relationship. But there's only so much he can do when Black, formerly a brilliant scene-stealer, never seems to care what his co-stars are doing. To be fair: Black's one-man-show-style performance probably seemed perfect for Jonathan, an oddball who often seems to live in a world of his own. It also doesn't help that Black often doesn't even seem to be acting in the same camera set-up as Vaccaro or Blanchett: there are a lot of over-the-shoulder shot/reverse shot images where Black is yelling and pursing his lips at the back of his co-leads' heads and/or their equally out-of-focus shoulders.

Still, Black's clownish schtick has gotten old lately (don't get me started on "Jumanji: Welcome to the Jungle"). He has his moments, but he also often sucks the energy out of the highest of high-energy scenes. Any really good comedic performance—especially ones delivered by comedians who specialize in self-absorbed outcasts—requires basic give-and-take from the on-screen performers.

Unfortunately, Black doesn't often seem to be interested in vibing with his co-stars. That may not seem like a fatal shortcoming, but it matters a great deal whenever Vaccaro struggles to find the right pitch for angsty outbursts, or Blanchett strains to sell mediocre (but not entirely unworkable) one-liners. Black, more than anyone else, should have been the one to wind up "The House with a Clock in Its Walls." Too bad he doesn't give as much as he takes. 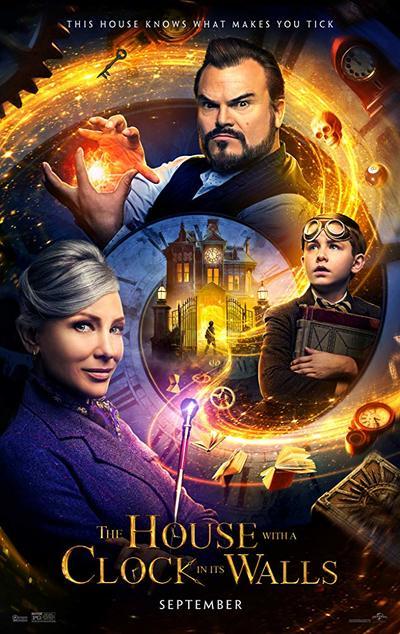