“The House” is an animated anthology with an inspired narrative focus, as it tells the history of one building, across time and species. Written by Enda Walsh and directed by different filmmakers for each one, "The House" hones in on the anxieties that come with a home, whether it’s the control that others have over it, the critters inside the walls, or the attachment that could lead to one's demise. With its rising directors each employing a surreal style, it creates a rich balance of ethereal, existential storytelling with stop-motion animation that’s so detailed and alive you can practically feel it on your fingertips.

The foundation for the anthology is established by the gothic cloth animation of Emma De Swaef & Marc James Roels, who previously orchestrated the colonization mini-anthology short “This Magnificent Cake!” Their eye for towering sets, intricate stark detail, and characters with tiny eyes and mouths continues here, with a slow burn tale about a family that suffers from a Faustian homeowner bargain. The father Raymond (Matthew Goode) makes a deal with “an architect of great renown” that he runs into the woods named Mr. Van Schoonbeek (Barney Pilling), who offers them a new mansion and furnishings, for free. The only catch, that they are aware of at least, is that they must give up their current home. Raymond jumps the opportunity as a means of status, to have the nicest house in the area, and make others jealous.

The family is quickly seduced by the extravagant amenities—the food that appears on massive dining room table, the electricity that provides full illumination. But young daughter Mabel (Mia Goth) has more trepidation, as she starts to witness the stranger aspects of its construction, like the zombified workers, who toil in the darkness, and suddenly take away the staircase at night. Things get even stranger, and more visually striking, when the parents are gifted clothes that look a lot like pieces to an ornate couch. It’s an effectively spooky short, one that gets a great deal of intrigue out what is unfolding in the shadows, prefacing the house as a nonsensical trap.

“The House” doesn’t continue this more horror vibe in the rest of the story, but rather plays upon nightmares of discomfort. In the second short, by Niki Lindroth von Bahr, a rat developer (Jarvis Cocker) is trying to prepare the home for showing, fixing it up room by room. In spite of his upbeat attitude and his best intentions, he’s shown to be a pushover, who runs into massive problems along the way, like an infestation of fur beetles that parallels the hopelessness of his pursuit. Even the food that he orders for the showing leads to the wrong order, making him improvise with hot dogs and ramen. Things get especially weird when two intimidating characters express interest, in seeing the room and then staying over night. They placate him with the repeated words that become freaky each time they're growled: “We are extremely interested in the house.” This short also nonetheless makes space for a grandiose and creepy-crawly musical number.

Jump to the last chapter, by Paloma Baeza, and the world has gotten even more chaotic but quieter. The house is now marooned on a nondescript body of rising water, surrounded by a pink mist. But the current cat landlord Rosa (Susan Wokoma) is obsessed with refurbishing the place, and has a whole plan charted out. Meanwhile her two current tenants, Elias (Will Sharpe) and Jen (Helena Bonham Carter), don’t pay rent with money but they do share a type of family bond with each other. As the least bleak of the three shorts, this one shows how the promise of a house has a seductive power, representing a desire to cling to the past even when the floor below you is slowly flooding. It’s also another striking feat of stop-motion animation, with lifelike sets and clothes that practically breathe as the furry characters move.

“The House” proves to be a consistent anthology, in that it’s always just about the same level of surreal, playful, sadistic, and entertaining. Across its different styles and species, “The House” never holds the audience’s hand when it comes to the poetic flourishes from its mighty gradual pacing; it prefers to be odd, like with the logic behind changing from humans to rats to cats. There might be a little clue in the end credits, as Cocker sings a moody ballad: “This house is … oh, I don’t know what it is.” The stories want you to wander its halls; to notice how things have changed over time, and how they have not. 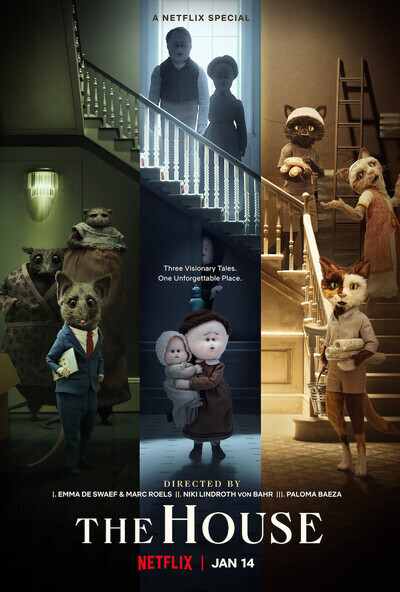 Will Sharpe as Elias