"The Hollars" is just good enough to make you wish that it were better. John Krasinski, longtime costar of "The Office," directed this modestly budgeted family drama; the writer is James C. Strouse ("Lonesome Jim," "The Winning Season"), who specializes in small-scaled, domestically focused stories of a sort that exhibitors don't seem too interested in showing anymore. "The Hollars" is an agreeable enough example of the form. It's too cute early on, it introduces seemingly major characters with much fanfare and then seems to forget about them, and it leans too hard on music montages from the start and then keeps giving you more of them, long after you've dug deep into the story and would prefer to hear the characters talk instead of silently frolic or mope while a pop song plays. But there are compensations, the cast in particular. And there are a couple of long stretches that are so well-judged that they suggest the greater film that might've been.

Krasinski plays John Hollar, a struggling graphic novelist who lives in New York City. He returns to his rural hometown (the movie was shot in various Mississippi counties) after learning that his mother Sally (Margo Martindale) has been diagnosed with a brain tumor and re-enters his old world with regret and resistance and makes bad choices because he's secretly an unhappy person. While his pregnant girlfriend Rebecca (Anna Kendrick) waits for him back in the big city, he's drawn to his high school girlfriend Gwen (Mary Elizabeth Winstead). Gwen is married to another high school classmate, Jason (Charlie Day), who just happens to be John's mom's nurse (it's a small town, see). Jason is depressed, or maybe just irritable, because he thought he was doing a chivalrous thing by marrying Gwen after she got pregnant but now senses (correctly) that she's just not that into him. The hero's dad Don (Richard Jenkins) is doubly depressed because of his wife's illness and his failing business. John's brother Ron (Sharlton Copley, subtler and better than usual) is depressed because his wife (Ashley Dyke) divorced him for being a deadbeat screw-up and is now trying to keep him away from their kids. And, as if poor Sally didn't already have enough to contend with, here comes a horrible realization: she never should've married Don.

That sounds like a whole lot of disillusioned, bummed-out people for one film, and maybe it is. But "The Hollars" approaches all of them with a mostly light touch, and folds their stories beneath the umbrella of diminished expectations, so that the whole thing goes down easily. Maybe too easily.

"It's terrifying to find out this late in life what you should have done," Don tells John—how cute is it that all the men's names rhyme? Not very? Okay—but the film never musters up the wisdom required to delve into what, exactly, that means for these characters. The movie purports to be about disappointment and how we all have to come to terms with it sooner or later, but it doesn't do enough narrative labor to make that theme come through. You get a scene here or there where a character restates some version of Don's confession, but despite smart performances that split the difference between kookiness and poignancy, these moments don't land as gracefully as they should because the main characters feel sketched instead of filled in. When John admits that he's terrified of bringing kids into the world because he's afraid of being a failure to yet more people, the moment is appropriately uncomfortable, mostly because of Krasinski's smirking-through-the-tears charisma (the actor's hint of melancholy is always his most striking quality). But most of the scenes up to that point have made John seem like a country-boy version of Jim from NBC's "The Office": funny and sweet but a touch smug and judgmental, and not too much more than that. So we can't ascertain whether John's impression of his deeper potential is accurate or not—not even in context of an early scene where he confesses to his mom that he's not a good enough artist to make it in the comics world, because at that point we don't know enough about his art to guess if he's right or just beating himself up.

The film is unobtrusively but too-conservatively directed, with lots of medium-wide shots showing the characters interacting with each other, plus occasional breaks for music montages that show, say, John swinging on a tire over a lake on his family's farm, or Ron and John playing Rock Band with Ron's kids. There's no part of the movie's aesthetic that could be called remarkable, and in time you might miss the excitement that comes from a beautifully timed reaction shot or a camera move that adds surprise and delight to exposition. Like too many actor-directors schooled in television, Krasinski treats the camera mainly as a recording device for capturing performances rather than an expressive tool in its own right.

Absent that sort of visual and aural pleasure, you tend to fixate on what's missing, and there's a lot missing. Who knows if it's the fault of Strouse's script or decisions made in the editing room? Either way, "The Hollars" feels short in a bad way. Mary Kay Place has one strong scene as Ron's sister, who holds down the fort at work when all the other employees have gone on strike, but after that, she all but drops out of the picture. Winstead is likewise almost a non-presence; Gwen plants an unasked-for kiss on John early in the film and then pfffft, that's it for her character. Jason, meanwhile, gets a lot more scenes than you might expect, given his tangential relationship to the Hollars, probably because Charlie Day is so funny that you can't have too much of him. Throughout, there's too much standard indie-film stuff, such as a scene of John pushing Sally through hospital hallways in a wheelchair while pop music blasts on the soundtrack, the better to express The Joy of Being Alive. ("Harold and Maude" is a great film, but it has a lot to answer for.)

The star rating on this review would have been lower if not for the core cast—especially Jenkins, who turns out to be one of the greatest of screen criers, and Martindale, whose honeyed bourbon drawl is pure magic—and three scenes that are so perfectly judged that they nearly redeem the film's missteps. The last of them is so intimate and truthful, and written and acted and directed with such relaxed confidence, that you might wish that someone had forced Krasinski and Strouse to watch it over and over while whispering to them, "This, right here. This is your movie." You'll know it when you see it. 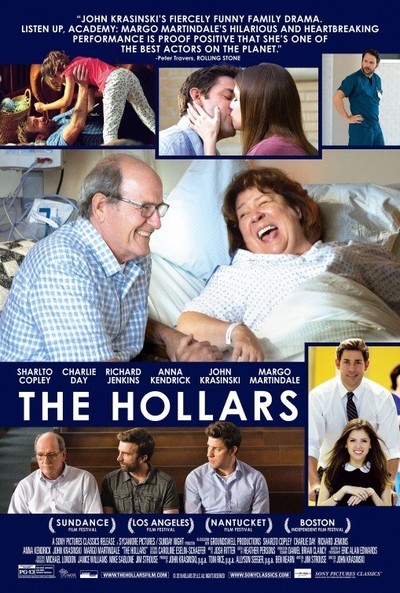 Rated PG-13 for brief language and some thematic material.