This year in film starts with a tricky prospect—a brutal arthouse director handling a studio project (good) that’s also the second American remake of a half-scary 2002 Japanese movie (not promising). Can you recommend a horror movie based on its impressive meanness? Meet Nicolas Pesce’s new and improved take on “The Grudge,” which is often as nasty as you want it to be, its cheesy jump-scares and generic packaging be damned.

Based on the original script by Takashi Shimizu (who did the 2004 American remake of his film "Ju-on"), Pesce’s script is still about a Japanese home that is cursed by a murder that happened in extreme rage, and the supernatural entity that travels with anyone who has been in the home (in this version, an American woman brings it stateside before the opening credits). More than worrying about who’s-who in a new saga of cursed people, Pesce orchestrates a dense, foreboding atmosphere, where unlucky souls have to manage their own oppressive sadness, along with the shadowy, space-invading entities that pop up in the dark.

One of the first things you notice about this movie is how bleak it is—characters are introduced with the brutal cards life has dealt them, the kind no one wants to receive. Take Andrea Riseborough’s Detective Muldoon, who has recently moved to the new town of Cross River because her husband has just died of cancer. She learns about a house on 44 Reyburn Drive which has connections to other since-buried murder cases in town, like one from 2005 involving a real estate agent named Peter (John Cho) and his wife Nina (Betty Gilpin)—we meet them as they get life-shattering news about the baby she’s carrying, and they spend the duration of the movie with it lingering between their silences. The gut-punch of their arc then doesn’t come from supernatural shenanigans that follow Peter, so much as what happens one night when he leaves the Reyburn home.

For good measure, the film also features a plot-line about a Reyburn resident (Frankie Faison) who wants to euthanize his loving wife of nearly 50 years (with the help of a “compassionate presence” played by Jacki Weaver) because of her deteriorating mental state. And he wants to do so in the Reyburn home because of his pitiful desperation to harness the property’s tenuous boundaries with life and death. Faison bottles up a lot of pain in a brief monologue, and it’s one of many moments in which “The Grudge” labors on storytelling parts that are often thankless in less inspired horror fare.

Pesce’s “The Grudge” gets a lot of mileage out of the unsettling spectacle of suffering, perhaps best encapsulated by a scene that introduces horror legend Lin Shaye. She’s initially only heard as the wailing voice of a woman inside the shadowy Reyburn house, as someone steps inside wanting to see what the fuss is about. Shaye’s back is turned but her cries are palpable and nightmarish, and that’s before she steps forward and into the light, and we get to see her hands. In this well-calibrated scene, Pesce then leads us to another one of his signature freaky images of life’s abandonment—a meticulously gnarly corpse, illuminated by the sudden fuzz of a TV screen.

Just as Shimizu’s original movie told itself in character-based chapters, Pesce’s story (story credit shared with Jeff Buhler) is like an ensemble movie where familiar faces provide emotional fortification for lean character detail. All of Pesce’s supporting actors (including Demian Bechir, who looks ready to lead a season of “True Detective”) make clear how vulnerable and helpless these people are, and in turn highlight how cruel it would be for a horrible force to make them suffer even more. It’s Riseborough’s show in the end, as she investigates the house's full history, but everyone gets their own harrowing sequence, and there’s a gratifying genre thrill in seeing an actor like William Sadler (playing a detective who cursed himself by investigating a murder years ago) tear through a flashback that shows how he was driven mad, which includes some great body horror. The same goes for Jacki Weaver, who is more compelling in a scene of being terrorized at a grocery store than the freaky stuff happening around her.

While juggling these different lives in different timelines, Pesce achieves a seamlessness that creates a backstory more about the entity’s kill count than it does individual characters. But he gets a strong pacing, all while telling the same downhill trajectory of how these people unwittingly cursed themselves, and became prey to a force that has little logic other than to appear in the shadows, be angry, and be consistent. In Pesce’s hands, the supernatural force that attacks these characters isn’t like the bad-luck ghost from Shimizu’s version, but feels as ever-present and ruthless as grief itself.

Pesce’s “The Grudge” often leads his uniformly strong cast to a jump-scare, and those jolts prove to be its least exciting attribute. Not just because of their generic construction (though Pesce can wind them up like a pro), but the pay-off, of seeing shadowy, wet figures scream with their eyes blacked out, sometimes introduced by the goofy slow croaking sound that “The Grudge” has made canon. Yes, there’s ghoulish stuff involving tubs and showers, but they play more like “Grudge” visual cues than standalone anxious sequences. There’s a lot of peekaboos in "The Grudge," too many for what makes the movie good, and by the third act they feel like an awkward part of the transaction in watching a horror film made by a studio that needs a good trailer.

Yet while it’s not very good at being scary, “The Grudge” excels at being unsettling. It proves to be a worthwhile fit for Pesce, whose relentless directorial debut “The Eyes of My Mother” is an automatic dare for any horror fan who hasn’t seen it; an act of emotional terrorism on its audience as much as its characters. That vision shines through in “The Grudge” more often than not, even if there are moments that are like watching an artisanal chef make cereal. In making a top contender for the feel-bad movie of 2020, Pesce is clearly leading with heart, and an impressive lack of it. 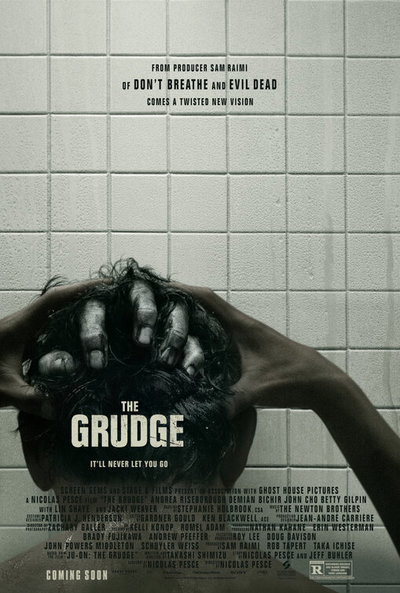 Rated R for disturbing violence and bloody images, terror and some language.