“The Glass Castle” is at odds with itself. Maybe that contradiction is by design. Maybe it’s inevitable, given the emotionally complicated terrain it treads. But the result is a film that never quite clicks tonally and doesn’t do justice to its harrowing central story.

The film is based on the bestselling memoir of the same name by former New York gossip columnist Jeannette Walls. In it, she recalls a childhood of poverty, uncertainty and neglect. As one of four children of an abusive, alcoholic father and a selfish artist mother, Jeannette learned to fend for herself and care for her sisters and brother at a young age, even as they were moved from town to town, kept out of school and often left hungry for days.

Director and co-writer Destin Daniel Cretton’s film alternates between Jeannette’s youth and teenage years and her adulthood in 1989, when she’d seemingly found stability with a job as a New York magazine writer and an engagement to an ambitious financial advisor. But the back-and-forth structure never really works: It feels episodic rather than building momentum toward its intended moments of truth.

“The Glass Castle” is actually more compelling in its flashbacks, when Jeannette (a mature and soulful Ella Anderson) is better fleshed-out as the family’s feisty, fearless voice of reason. And that’s surprising given that Brie Larson plays her as an adult. Larson reunites here with Cretton, whose 2013 indie gem “Short Term 12” was one of the movies that put her on the map. But the depiction of Jeannette in her mid-20s renders her strangely inert; she’s a passenger in her own story, often functioning at the whim of others.

As in “Short Term 12,” which takes place at a foster-care center for at-risk teens, “The Glass Castle” doesn’t shy away from the horrors its young characters endure. And Cretton’s matter-of-fact approach once again serves him well. Working from a script he co-wrote with Andrew Lanham, he wisely doesn’t overplay the violence and squalor Jeannette and her siblings suffered.

Still, the portrayal of patriarch Rex Walls remains troubling. Woody Harrelson can be terrifying in the role, especially in the character’s dangerous instincts and drunken rages. He seems to recognize that this man was a monster. But “The Glass Castle” also wants us to think he’s exciting in his unorthodox parenting approach and regard his antics as amusing. The same is true of Naomi Watts’ performance as Rex’s wife, Rose Mary, a flighty and playful woman who once got so ensconced in her painting that she failed to notice Jeannette severely burning herself while cooking hot dogs on the stove.

“It’s the struggle that gives it its beauty,” Rose Mary says to Jeannette in explaining why she was drawn to an unusually shaped tree in the desert during one of the family’s many stops (and spelling out the film’s central theme),

Again, maybe the Walls parents were all those things—and so many more—to Jeannette and her siblings (played as adults by Sarah Snook, Josh Caras and Brigette Lundy-Paine). But the result is a film that feels surprisingly safe as a whole, despite its individually startling scenes.

Most of these take place in Welch, West Virginia, the impoverished hometown Rex returns to reluctantly only once the family is totally broke. This is where he finally plans to build the glass castle of the story’s title: A magnificent, solar-powered structure he’s been designing for years. Clearly, that’s never going to happen. But significant events do take place there, including the quietly powerful moment when Jeannette asks him to stop drinking—by lantern light, because the family can’t afford electricity in their run-down shack.

Any sobriety Rex achieves doesn’t last long, though, as we see from the 1989 sections. He continues to get drunk and embarrass Jeannette, especially as she tries to project a polished façade alongside her stable and supportive (yet slightly boring) fiancé, played by Max Greenfield. Larson eventually allows the cracks to show—and lets the pent-up emotion out—in a couple of stirring outbursts that are the highlights of a performance that’s otherwise understated to a fault.

Certainly forgiveness and redemption are admirable—and possible—after such a difficult childhood. They’re also worthy and inspiring cinematic themes. But “The Glass Castle” ultimately ties up all the ugliness with a tidy bow that doesn’t quite fit. 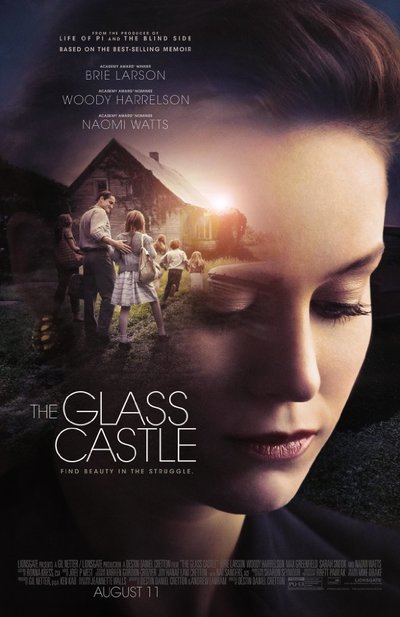 Rated PG-13 for mature thematic content involving family dysfunction, and for some language and smoking.

Writer (based upon the book by)