The Girl in the Spider's Web

The original Swedish-language adaptation of Stieg Larsson’s phenomenally successful novel “The Girl with the Dragon Tattoo” was not an especially great film by most cinematic standards—it was directed in an efficient though relatively nondescript manner that didn’t always hide the occasional clunkiness of the narrative—but it contained a performance by Noomi Rapace as troubled hacker genius Lisbeth Salander that was so focused and driven and compelling that it single-handedly elevated the proceedings to the level of compulsively watchable. When David Fincher did his surprisingly by-the-book big-budget studio version of the story soon afterwards, it still had the lumpy storyline as well as a performance by Rooney Mara as Salander that, while perfectly adequate in its own right, could not begin to hold a candle to Rapace’s stunning take on the part. However, Fincher directed it with such elegance and precision—without tamping down any of the edgier elements in order to make things more palatable to the masses—that it also resulted in a film that was much better than it had any real right to be. Now, having skipped over the two follow-up books that Larsson himself wrote before his death (and considering the weakness of the Swedish film adaptations, that was probably a good idea), the English-language version of the franchise is being relaunched with “The Girl in the Spider’s Web,” and this time around, the resulting film features all of the dubious qualities of the previous entries listed above without any of the virtues.

Based on a novel by David Lagercrantz, the writer hired by Larsson’s family to create new stories, the film takes place three years after the events of “Dragon Tattoo” and finds Lisbeth (now played by Claire Foy) working as a sort of avenging angel for abused women everywhere—she is introduced to us as she ties up a slick businessman with a penchant for beating women and transfers his bank account holdings to the wife he has just smacked around, before applying a Taser to his genitals. However, she is still a hacker first and foremost and when she is offered a seemingly impossible job to do by former NSA employee Frans Balder (Stephen Merchant), she cannot resist the urge to take it. It seems that Balder invented a computer program named Firefall that gives the person using it the power to hack virtually any nuclear missile system in the world. After getting it up and running, however, it dawns on him that this was probably not a good idea and so he wants Lisbeth to steal it away from the NSA computers and hide it. This proves to be easy enough but someone else is on the trail as well and steals her computer before blowing up her apartment with her in it.

She survives but is sufficiently distracted to miss her meeting with Balder and his young son, August (Christopher Convery) and Balder, deciding he has made another mistake, throws himself on the mercy of the Swedish Secret Service, whose deputy director (Synnove Macody Lund) hides them away in a safe house. Having learned from her one-time ally, crusading journalist Mikael Blomkvist (Sevrrir Gudnason), that those responsible for the bombing are connected to the Russians, Lisbeth begins her own surveillance of the safe house and when Swedish security proves to be less than it is cracked up to be, she ends up rescuing August and, with the aid of Blomkvist and Edwin Needham (Lakeith Stanfield), another NSA agent trying to retrieve Firefall, trying to figure out who is behind it all. When that person turns up (played by Sylvia Hoeks), her identity turns out to hit Lisbeth a lot closer to home than expected.

The title sequence of “The Girl in the Spider’s Web” deliberately evokes the highly stylized ones designed by the late, great Maurice Binder that used to preface the James Bond movies. In a way, this is appropriate since the film itself evokes old Bond movies more than anything else, specifically the weaker ones that tended to throw in lots of elaborate action set pieces and gadgetry in an attempt to disguise the fact that they didn’t have much of a story to offer. The film is chock-full of kinetic action throughout—ranging from car chases to elaborate fight scenes to the last-minute discovery that the NSA tech guy is also a crack sniper—and while director Fede Alvarez stages them in a slick and efficient manner, they don’t really seem to have any connection to the elements that attracted people to the Lisbeth Salander stories in the first place—do you know anyone who emerged from “Dragon Tattoo” raving about the fight choreography? On the bright side, they do serve as distractions for the genuinely terrible story that is dribbled out in between them. This is the kind of tension-free thriller that requires even the most seemingly intelligent of characters to act like absolute morons in order to get from one clumsy plot point to the next. When audiences cringed at “Dragon Tattoo,” it was in response to some nasty business. When they cringe here, it's the result of yet more ham-handed storytelling.

However, the worst thing about “The Girl in the Spider’s Web”—the element likely to enrage most fans of the franchise—is how it betrays its central character by eradicating almost every aspect that made her so initially fascinating. Once a character who refused to be reduced by her multiple sexual traumas and who became a feminist icon for her continuing battles against all aspects of a misogynistic society, Lisbeth has now been reduced to a nondescript female action hero. Her rage, feminism and sexuality have all been dialed way down (the latter to practically nothing), and so she becomes a non-entity in her own story—this is bad enough on its own but when you consider that this is the first Salander film to emerge in the #MeToo era, it somehow feels even more offensive. (For her part, Foy throws herself into the part but since she has virtually nothing to play with, her efforts are in vain.)

“The Girl in the Spider’s Web” is essentially the cinematic equivalent of a clip-on version of the nose ring that its central character famously sports throughout—a simulacrum that tries to evoke the edge and danger of the real thing without betraying even the slightest amount of genuine commitment. Seemingly made only so that it can one day wind up in constant rotation on basic cable, it is the kind of meaningless product that may win a weekend or two at the box office but which will barely be remembered by most people only a few weeks from now. Of course, there is always the hope that both the character and franchise can one day resurrect themselves as the Bond films have done repeatedly over the years. However, based on the evidence here, I suggest you don’t hold your breath. 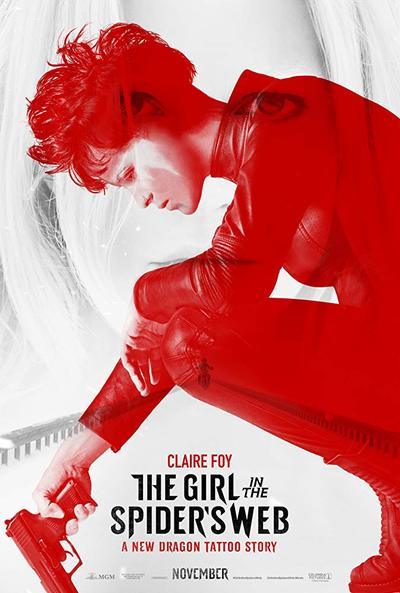 Rated R for violence, language and some sexual content/nudity.

Writer (based on characters by)