The Ghosts in Our Machine

Liz Marshall's "The Ghosts in Our Machine" avoids this problem by choosing as its subject Jo-Anne McArthur. Committed to her cause but neither hectoring nor sanctimonious, she is easy to like and to listen to, in part because her activism does not drive her to harassment or vandalism or to plant bombs at research centers. Her activism is her art, and her art is photography. She travels the world, sneaking into fur farms and anywhere else that animals are exploited, and photographing their plight. What she has seen has given her post-traumatic stress disorder.

The film follows her as she takes photographs and tries to have them published. Early on there is footage of a meeting, frustrating for us and maddening for her, at which she is told what she is always told: her pictures are excellent and her work is admirable but the images she submits are too upsetting to be printed by most magazines. "The Ghosts in Our Machine", then, is an effort not just to document McArthur's life and work, but to give that work greater exposure. In that it succeeds, and should be applauded for doing so.

However, Marshall's film does not only aim to document animal rights activism but also to propagate it, and in that it is less successful. This is a film overflowing with passion and compassion but often lacking the intellectual detachment necessary to distill conviction into a rigorous argument. "The Ghosts in Our Machine" is so convinced of its beliefs it doesn't really try to persuade you of them. It just assumes you'll agree.

We hear at the start of the film that the struggle for animal rights is the 21st Century equivalent to the struggle for civil rights in the 1960s but this idea is not cogently developed. Some of the film's best sections deal with the importance of the adoption by ordinary citizens of animals that have been used in tests or intensive farming. A later scene tells us that all animals should be granted rights equal to humans and that no being should be allowed to own another, meaning that just as humans should not own other humans as slaves, we should also not own animals as pets.

The messages contradict each other. The former shows the benefits to the animal rights movement that can come from humans owning animals and the latter argues that no-one should be allowed to own animals at all. If I do not own the dog I have saved from a farm or research center, what is to stop someone stealing it and returning it to one? I suspect those behind "The Ghost in Our Machine" would propose that we replace the ownership of animals with the legal guardianship of animals, in a process akin to the adoption of children, but they do not propose it in this film.

A snapshot of the film's strengths and weaknesses can be seen in its end credits (in which the "non-human animals" are listed by name and billed above the "human animals" who participated). The images of forlorn animals displayed behind the credits are powerful and moving but the short facts that are interspersed with them are given no context and subjected to no scrutiny.

One of them informs us that "In 2011, 2,711 beagles were used in research in the UK, primarily for human medicine or dentistry." Another states that in the same year "the global production of mink and fox farming increased by 6% with a total of 57 million pelts." There is no acknowledgement, though, that there may be a moral difference between doctors using beagles in tests that could potentially cure cancer in children and fur farmers skinning mink because fashionistas want to wear the pelts around their necks.

Because its arguments are underdeveloped, "The Ghosts in Our Machine" feels too long. It is a new 90-minute film that says little that was not said more effectively 50 years ago in Georges Franju's 30-minute "Blood of the Beasts". But perhaps that is not as damning a criticism as it might seem. Part of the argument McArthur and Marshall are making is that our attitudes to animals have progressed little since then and our mistreatment of them is so egregious it should be decried over and over until the situation changes forever.

As such, "The Ghosts in Our Machine" is part of a cycle of recent documentaries (including "The Cove,"  "Blackfish," and "Project Nim") that examine the roles the modern world forces animals into and explore the intersection of science and morality. And it is best watched alongside those films because they plug some of its gaps.

Jo-Anne McArthur's startling photographs do all they can to highlight the suffering of animals trapped in the machinery of our society but Liz Marshall's film does far less than it could have done to amplify and expand their message. Consequently, it is far less than the documentary the photographs deserve. 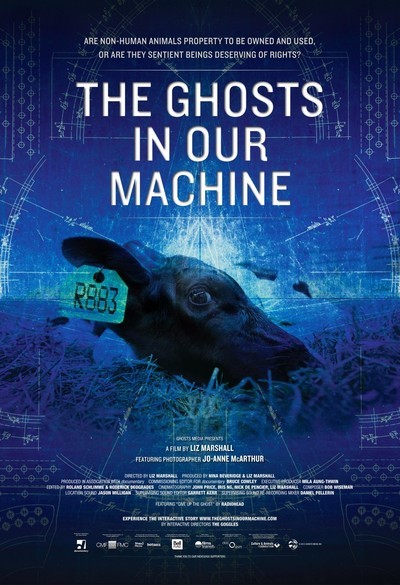 Jo-Anne McArthur as Herself