Greg Barker's "The Final Year" is an engrossing documentary about the last year's worth of foreign policy work during the Obama administration. It's also about the grim surprises that life sometimes has in store for the complacent, an idea expressed not just in the actions of the diplomats and politicians onscreen, but through the storytelling itself, which becomes increasingly anxious and dire as 2016 steams towards November and it becomes clear that the person they all expected to become president and continue their work is, in fact, not going to be moving into the White House after all.

The surprise factor ironically deepens what might otherwise have been a well-made but unchallenging film, aimed primarily at the like-minded. "The Final Year" is admiring, often laudatory work, which is not a huge shock given the level of intimacy that's been permitted to the film crew. Notwithstanding the occasional exploding cigar like Michael Wolff's muckraking 2017 bestseller Fire and Fury—for which the Trump White House granted thorough access, only to end up denying that Wolff saw much of what he says he saw there—the executive branch tends not to let journalists or documentarians roam around the West Wing and on diplomatic missions all over the world, gathering mountains of raw material and talking to powerful people without handlers present and, in this particular case, even revealing that the West Wing has mice and roaches just like everybody else, unless they are pretty sure the take is going to be positive at the end.

And this is an affectionate take, verging on worshipful—though in retrospect you might wonder if the wistful aura comes from editing footage of a movie about functional adults who seem dedicated toward avoiding war, and rancor generally, rather than constantly posturing in a playground-macho way, as the Obama team's successors in the Trump White House do, emulating a man at the top whose entire adult life has revolved around confrontation, domination and peacocking, and who isn't above using social media to bait countries with nuclear weapons.

President Obama is a strong presence here, but he's not central. Barker mostly follows Secretary of State John Kerry, United Nations Ambassador Samantha Power and Deputy National Security advisor and speechwriter Ben Rhodes as they deal with problems and crises all over the globe, in an array of locations, including Austria, Cameroon, Chad, Nigeria, Vietnam, Japan and Greenland. All come across as measured, educated, decent, even idealistic people, with the partial exception of Rhodes, an obviously smart and committed person who also has an arrogant and intemperate edge (a section early in the film deals with the fallout from a New York Times profile where he blasted the Washington press corps and many of his colleagues as ignorant fools who didn't know as much as he did).

The looming possibility of a Trump presidency spurs Obama's people to redouble their efforts during the administration's final months, in particular during the post-election period when it becomes clear that the incoming crew doesn't merely believe the opposite of what the last group did, but is adopting a scorched earth policy towards everything Obama did, domestically and internationally. Despite notes of doubt about the Iran nuclear agreement and the administration's handling of the humanitarian disaster in Syria, this movie is enthusiastically bullish on Obama and his people, to the point where it veers close to the sort of sentimentalization that the political fantasy "The West Wing" lavished on the Clinton administration during its first three seasons.

But it's impossible to say what the take might have been had Obama been succeeded by Hillary Clinton, which is obviously what both the film crew and the regulars in the West Wing expected to happen. Maybe equally approving, or much more skeptical and probing—who can say at this point, really? Trump's ascension seems to have made everyone involved behind-the-scenes, as well as everyone depicted onscreen here, grade Obama on a more forgiving curve, by virtue of the simple fact that he reads books and seems able to get from the end of one sentence to another without losing his train of thought or deliberately insulting other people, nations, and races.

As an evocation of on-the-ground political reality, "The Final Year" is a a solid and often entertaining work in much the same wheelhouse as the durable political documentary "The War Room," adopting a basically affectionate attitude while serving up lively and sometimes unglamorous details, such as shots of Rhodes texting backstage during Obama's delivery of a historically important speech in Hiroshima, Japan, even though he wrote the first draft himself, because the obligations never stop when you're in a job like that; and Power going to Africa in the wake of Boko Haram’s kidnapping of hundreds of schoolgirls.

But as a record of what it feels like to expect one outcome and be forced to adapt to another, it's unique. Envision a film from the point-of-view of people still recovering from an out-of-nowhere car accident, set during the period before they were still in traction and being fed intravenously while looking back on their life before. Any problems they might had before the wreck would seem relatively minor, and there would be a tendency to sentimentalize everything without meaning to. This is how the old days become the good old days. 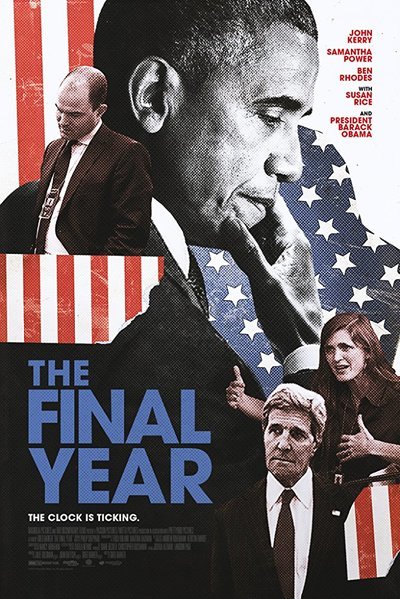 Barack Obama as Himself

John Kerry as Himself

Samantha Power as Herself

Ben Rhodes as Himself

Susan Rice as Herself