Dissertations have been written about the trope of The Final Girl. Stacie Ponder named her excellent blog after The Final Girl. What does The Final Girl(TM) say about our culture, and film, and female sexuality? To be fair, "The Final Girls," directed by Todd Strauss-Schulson, with a script by Joshua John Miller and M.A. Fortin, does not set out to address those questions, except in the most surface-level way. It's more of an affectionate spoof on 1980's "summer camp" slasher films, spinning the familiar into a knowing world of "meta" commentary. It's similar to the "X-Files" episode "Hollywood A.D.," when Scully and Mulder realize a movie is being made about their lives. A little of this goes a long way.

Max (played by Vera Farmiga's younger sister Taissa Farmiga) is a mousy high school student in mourning for her dead mother. Her mother (Malin Akerman) was once a Scream Queen whose definitive role was 20 years before in the "classic" "Camp Bloodbath." "Camp Bloodbath" has gained such a cult following that its fans refer to themselves as "Bathematicians." Max's mother played Amanda, the sweet blonde camp counselor "with a clipboard and a guitar" slashed to death after losing her virginity on a waterbed.

Max has ambivalent feelings about "Camp Bloodbath," so when she's invited to attend a screening of the movie in honor of her mother, she hesitates but then obliges, going with Chris (Alexander Ludwig), a handsome classmate who obviously has a crush on her. During the screening, through some convergence of audience/movie fandom and Max's yearning to see her mother again, Max and four of her pals are thrust into the fictional world of "Camp Bloodbath." They stand in the woods, watching with confusion as the yellow VW van filled with raucous camp counselors careen down the road.

There are some innovative bits. The real characters end up going into the black-and-white flashback in the original "Camp Bloodbath" to witness Billy's origin story. "Have I suddenly gone color-blind?" gasps Gertie. (The words "Summer 1957" that start the flashback become actual three-dimensional objects that the characters have to step over.)

"The Final Girls" is never once scary, the effects are schlocky, and the action/fight scenes are confusing, especially one that takes place in a dark shack where it is impossible to tell what is happening. Horror should be dark, yes. But so dark you can't see a thing? Many of the climactic moments are telegraphed from a mile away because horror movies are familiar. Will the black characters die first? Will the party girl be punished for her sexiness? Amanda's slow acceptance, through Max's gentle encouragement, that she doesn't need to be just the girl who loses her virginity and then dies, is pretty sentimental, but leavened with humorous moments when Amanda realizes that she, and the camp, are not real. "What kind of camp has a waterbed anyway?" she murmurs, as though it had never occurred to her before.

The exploration of time-loops and fiction vs. real are somewhat funny but lacking the profundity of, say, "Stranger Than Fiction", "Groundhog Day" or "Edge of Tomorrow." The clearest example of the experimentation with time and narrative is Amanda's solemn monologue in "Camp Bloodbath" where she tells the other counselors "the legend of Billy Murphy." That monologue is played a total of four times in "The Final Girls," each one in a different context, until the "re-enactment" part of it, that it's all fiction anyway, is clear even to Amanda.

Angela Trimbur, the actress who plays dumb promicuous Tina, almost walks away with the whole thing. It's a relatively small part, but she seems like she could have legitimately stepped out of a 1980s slasher film. Trimbur gives an extremely funny performance. Watch her in the background of group scenes. The comedy never stops.

"The Final Girls" is a pretty disappointing experience if you are devoted to The Final Girl(TM), but it's not completely devoid of interest. 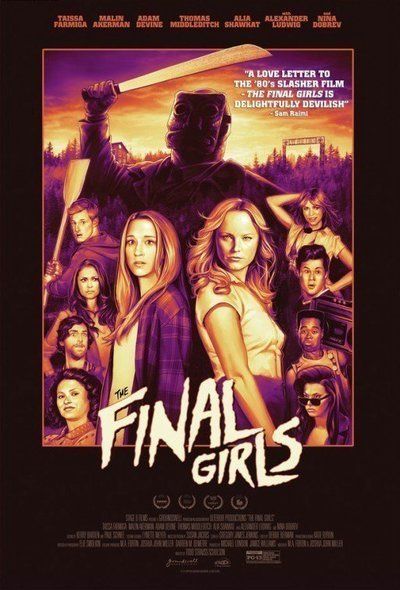 Rated PG-13 for horror violence, some crude and sexual material, language and drug use