A watch. A painting. A chicken dinner. A snippet of conversation.

These and other everyday pieces of a life take on greater significance and heartbreaking meaning throughout the course of “The Father.” They’re at once mundane and unreliable, tactile and elusive within the ever-shifting mind of Anthony Hopkins’ character, an 80-year-old Londoner succumbing to dementia.

Writer/director Florian Zeller, adapting his prize-winning, 2012 French play of the same name with the help of the legendary Christopher Hampton (“Dangerous Liaisons,” “Atonement”), has pulled off a dazzling feat here. He puts us within the mind of the ailing Hopkins’ Anthony, allowing us to experience his confusion as if it were our own. But he also offers the perspective of the caretakers and loved ones who try to settle his volatile temper and organize his jumbled memories. We never know what’s true—or who, for that matter, as characters come and go and take on various names and identities, depending on his recognition of them. Everything is fleeting and yet each specific moment feels urgent and real.

Struggling to navigate this muddied mélange of past and present is a brilliant Hopkins, giving a performance that’s both charismatic and ferocious, sometimes within the same breath. There’s mind-blowing specificity to his technique here as he’s called upon to convey a wide range of feelings and emotions, but also a softness and openness we’ve rarely seen from him. It’s some of the absolute best work of Hopkins’ lengthy and storied career.

And as his daughter, Anne, Olivia Colman is consistently his equal. She, too, must ride this roller coaster and struggle to put on a British, stiff upper lip within a situation that’s steadily crumbling. She’ll manage a smile as tears well in her eyes or flinch ever so slightly yet maintain her patience when her father says something rude and insulting. As our guide—as much as Zeller will allow us one—Colman is tremendous as always.

But mainly we see the world through Anthony’s eyes, and at first, that seems like a pretty peaceful place to be. When we spy him initially, he’s listening to opera on a pleasant afternoon in his spacious, tastefully appointed London flat. But soon, Anne stops by to visit and informs him she’s met someone and is moving to Paris to be with him. His demeanor changes instantly and, feeling wounded, he lashes out: “You?” he asks incredulously. “You mean, a man?” Later, as the long-term reality of this news hits him, he reveals a deeper layer of hurt: “So if I understand correctly, you’re leaving me, is that it? You’re abandoning me.” His face falls a bit but he still tries to exert a measure of control and bravado.

Some version of this sort of conversation happens again and again—over where he placed his beloved watch, for example, or the cruel treatment he inflicted upon his previous at-home caregiver. And just when we think we’re getting into the rhythm of “The Father,” it changes the tempo and the players. Maybe this isn’t Anthony’s flat—maybe it’s Anne’s and she’s taken him in to stay with her. Maybe she has a husband after all, named Paul (Rufus Sewell), with whom she still lives. And maybe now she’s being played by Olivia Williams in a clever bit of casting, given their similar features. The arrival of Imogen Poots as a potential candidate to look after Anthony provides some sunshine, as it gives him the opportunity to flirt with a pretty young woman. He’s randy and charming as he declares playfully, “Time for an aperitif!” But she also reminds him of his other daughter, who was an artist, and whatever happened to that painting of hers that was hanging above the mantle … ? Anthony’s first meeting with Poots’ Laura is a great example of what a shock it can be when Zeller pulls the rug out from underneath us—never in gimmicky fashion, but rather as a reflection of the jarring changes occurring within the character’s mind and mood. We feel them, too.

But while some moments of memory loss cause a jolt in the story and give Hopkins room to express his character’s frustration grandly, what’s happening throughout with the production design and editing is so subtle, it’ll make you want to rewind a few seconds just to appreciate the slight changes. Whether it’s different tiles on the kitchen backsplash, a rearranged bedroom or a white grocery bag instead of a blue one holding the chicken to roast that night, production designer Peter Francis vividly creates various versions of this same, enclosed setting. And what editor Yorgos Lamprinos does here is so complicated and yet so understated, it’s like a magic trick right before our eyes. Lamprinos, our Los Angeles Film Critics Association winner for best editing, had the daunting task of crafting a story that’s simultaneously confusing and compelling, and he rose elegantly to that challenge. And the score from Ludovico Einaudi, whose music also appeared recently in Chloé Zhao’s gorgeous “Nomadland,” mirrors the performances in the way it tugs at our hearts without being mawkish.

The fluid nature of the narrative calls to mind Charlie Kaufman’s achingly melancholy drama “I’m Thinking of Ending Things” from last fall. While Kaufman’s story was deeply steeped in his trademark surrealism, what’s so sad about both films is the way they portray the notions of home and family—which should be safe harbors—as ephemeral. The people and imagery we rely on to define us may look familiar, but there’s something slightly off, and that’s deeply unsettling. I suspect it will be especially so for viewers who’ve experienced such a decline with members of their own family. But perhaps it will provide some solace, as well. 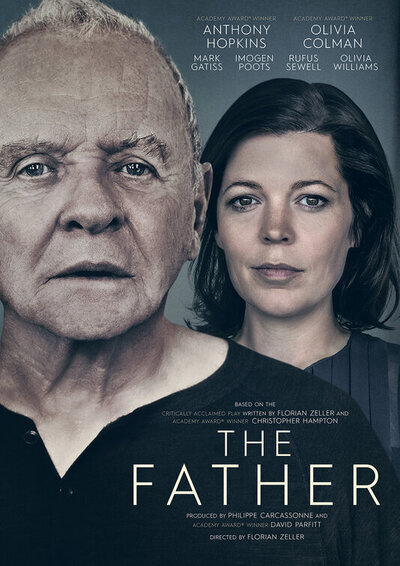 Rated PG-13 for some strong language, and thematic material.

Mark Gatiss as The Man

Olivia Williams as The Woman