The Fall of the American Empire

"The Fall of the American Empire" is an unbearably preachy post-financial-crisis civics lesson in heist movie drag. We follow a motley crew of criminal misfits as they lecture each other about the economy and the lose/lose nature of global finance as they plot to make off with a bunch of money that they stole from, uh, Irish and Jewish gangsters.

The condescending tone of Arcand's dialogue suited both "The Decline of the American Empire" and "The Barbarian Invasions," since both of those films are about holier-than-thou Canadian academics. But while "The Fall of the American Empire" is as vinegary as those two earlier films, it's not as warm or as attractive. The most substantial thing that Arcand's three films have in common is that they all follow self-absorbed characters who insist that traditional morality doesn't apply to them, not in a world governed by uncaring G-men and/or capitalists. But Arcand doesn't seem to care about his characters either. They are, for the most part, whiteboards that he uses to tell banal truths about charity and criminality in the 21st century.

Arcand half-heartedly asks viewers to root for Pierre-Paul (Alexandre Landry), a nebbish courier who tries to launder money that he took from an aborted heist orchestrated by Jacmel (Patrick Abellard) and Chenier (Kemy St-Eloy), two woefully under-developed black crooks who listen to loud rap music and steal cars. But Pierre-Paul's not the only one who wants Jacmel's loot: there's the West End Gang, who are negligibly repped by white, torture-loving gangsters (we're helpfully told that they use the same interrogation tactics that the SS used at Auschwitz); and there's police officers Carla and Pete (Maxim Roy and Louis Morrisette), who apparently stand in for, uh, all of the Canadian government? (Pierre-Paul: "The police force is the government. They're never there to help.")

Pierre-Paul, speaking on Arcand's behalf, uses credible economic anxieties as an unbelievable pretext for robbing the mob (seriously, though: the Irish and the Jewish mob? What decade is Arcand living in?). Pierre-Paul reminds his accomplices that he has no financial dependents and is stuck in a job that doesn't pay well since a position in academia (his goal) simply doesn't pay. Pierre-Paul also knows that his courier job will, in time, physically deplete him: his knee joints will wear out and he probably won't be rich enough to repair the damage. Pierre-Paul also considers himself above the law—"I don't respect society" —and insists that he does not come from money: "For generations, my family's been poor." And, as if Pierre-Paul's straits couldn't get more dire: he has unpaid student loans! Wow, say no more, dude, just take whatever you can carry.

So Pierre-Paul nervously, but persistently assembles a crack team of equally opportunistic stick figure characters who help him avoid capture by investing Jacmel's money in a series of fake charities and off-shore banking transactions. Pierre-Paul's merry men are: Jacmel, who barely gets any dialogue; Camille (Maripier Morin), Pierre-Paul's love interest and a stereotypical sex worker with a heart of gold; Sylvain (Arcand regular Remy Girard), a surly ex-con biker who has been studying tax law while in prison; and Wilbrod (Pierre Curzi), a law-bending stock broker who specializes in money laundering and tax shelters.

Too bad Arcand spends way more time defending Pierre-Paul's actions than he uses to establish Pierre-Paul and his fellow thieves as sympathetic (or just human enough) characters. Pierre-Paul mostly just lectures people using Wittgenstein and Marcus Aurelius quotes. And Camille isn't much more down-to-earth: she insists that people judge her using retrograde movie cliches and adds that "Legally, I'm a criminal, but I never hurt anyone." Understood; now when does the movie start, and will there be a quiz later?

Arcand explains (and explains, and explains) how crime does, in fact, pay (when you're rich and white enough). But he never seems to be interested in his characters' motives, as he has Camille explain when she runs into an ex-lover: "Let's not talk about what can't be explained." So we get a lot of a belabored, self-serving talk about necessary crimes and a few wan moments of sensuality: a flash of leg, a tight outfit, an off-camera (and preemptively interrupted) sex act, etc. If you thought "The Big Short" should have been more patronizing and less earthy—Canada awaits! 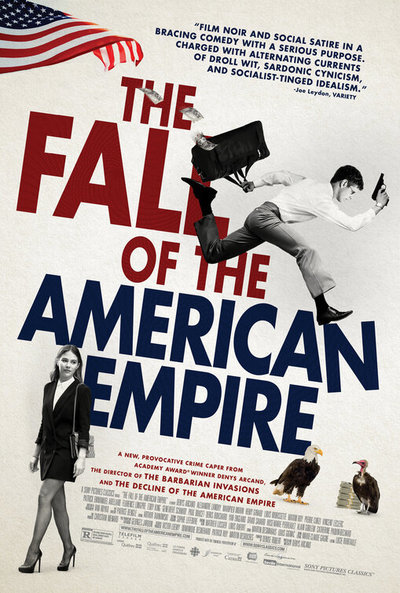 Rated R for some strong violence, sexual content/nudity and language.