The Face of Love

If Nancy Meyers ever decided to dabble in gothic romance, it probably would turn out to be something like "The Face of Love".

She likely would also approve of the tasteful professions of the two central characters: A house stager hired by realtors to make empty abodes feel cozy and an adjunct art professor who paints large, sun-lit portraits. The casual-chic, over-50 garb worn by the leads would definitely pass muster, too.

But style is easy. Substance is hard. Even Meyers might be stymied by what to do with the all-too-convenient twists and turns of this morbidly warped melodramatic story about a grief-stricken, middle-aged widow who decides to take a second chance on love with a man who is the spitting image of her late husband. Certainly, "The Face of Love"'s actual director Arie Posin, is hard-pressed to turn the repercussions of what is essentially a ghoulishly despicable act of deception into something that an audience would want to witness—let alone feel sympathy about its clearly doomed outcome.

If they did, they could simply watch Hitchcock's "Vertigo" instead.

Granted, it isn't necessarily a bad thing to get a double helping of Ed Harris in one sitting. This enduring 63-year-old magnetic screen presence remains the sexiest bald actor of his generation—and probably any other. And Annette Bening has lost none of her sensual allure at age 55, even as her Nikki morosely pines for Garrett, her adored spouse who recklessly drowned five years earlier while they celebrated their 30th anniversary at a Mexican resort.

At first, we feel for Nikki, especially when she discovers Garrett's body as it washes up on the beach. Back home, she tries to rid all outward signs of his presence—clothing, photos, artifacts, anything that would ignite memories of their passionate moments together. But the flashbacks keep coming. Her daughter is too wrapped up in her own relationship travails to support her mother as she struggles with her loss. Neighbor and needy widower Roger (a wasted Robin Williams) clearly would like to be closer to this lonely lady but he practically has "Just a Friend" stamped on his forehead.

Then, one day, she decides to go to the art museum by herself for the first time since Garrett's death. And who should be sitting outside on a bench but his very own doppelganger. And just like that, Nikki is no longer a woman in mourning. She is a woman obsessed. She proceeds to hunt down Tom—as the divorced painter is called—at the college where he teaches. Under the pretense that she wants to take art lessons, they meet and sparks fly.

Roger, learning there is a new man in her life, asks Nikki: "Is he younger, a boy toy?" She responds, with a knowing smile: "He's just my type."

It's difficult to suppress the urge to scream "Run, Tom, run!" whenever a moony Nikki flutters her eyes while continually referring to him as Garrett—that's on top of lying that she is alone because her husband dumped her. You would think he would get a clue that all is not right when they visit one of Garrett and Nikki's favorite restaurants together and the chef acts as if he already knows Tom. But, then, that would make sense.

If done right, "The Face of Love" could have been an interesting update of the sorts of "women's films" that Joan Crawford made in her later career. But Posin is more interested in summoning blatantly earnest emotions that are clearly beyond the reach of such pedestrian material. It all too easy to view Bening's character as a manipulative monster bent on destroying this innocent man for her own selfish purposes instead of someone who should be seeking psychiatric help.

And what a shameful waste of a potentially dynamic movie couple, who really offer the only reason to sit through such a subpar soapy affair. If you must attend "The Face of Love" despite these warnings, just be prepared to leave with a look of disdain. 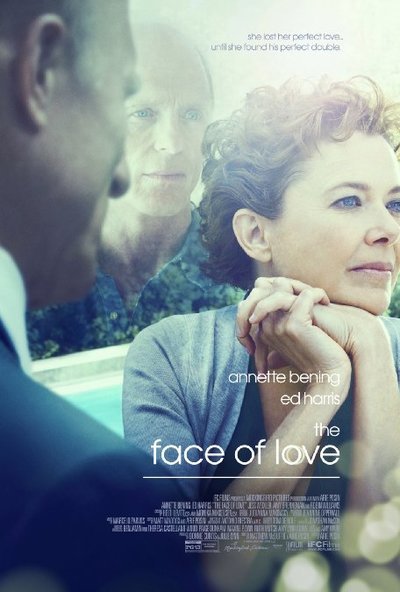