Netflix’s eight-part miniseries “The Eddy” has been billed as a major project for Damien Chazelle, the acclaimed filmmaker behind “First Man,” “La La Land,” and “Whiplash,” but he only helmed the first two episodes. It’s more the baby of Jack Thorne, who wrote all eight, and Glen Ballard, who composed original songs for the entire series. Their names don’t sell like Chazelle’s. What’s perhaps even more interesting is that the first two episodes are easily the weakest. To be fair, Chazelle is laying some groundwork for what’s to come, but “The Eddy” doesn’t find its voice until episode three. It’s a show that I didn’t think I’d like at all after the first two hours and ended up almost loving at times. “The Eddy” is a critical ride, a show with scenes that moved me as much as anything on TV this year embedded in a narrative structure that often feels unrefined. Ultimately, the good outweighs the bad enough to recommend it, even if I wish the true peaks of this series were a part of a better show from beginning to end.

The amazing André Holland plays Elliot Udo, a Parisian jazz club owner and formerly famous musician. He hasn’t been able to play himself since the death of his son, but he has no problem criticizing the band who he manages at the club, led by a singer named Maja (Joanna Kulig of “Cold War”), who is also Elliot’s occasional girlfriend. Elliot co-owns the club with Farid (Tahar Rahim) and they’re struggling as the show opens (as all nightclubs in fiction are). There are some shady characters on the fringe of the club, Farid seems to be hiding something, and Maja seems uncertain. And then Julie (Amandla Stenberg of “The Hate U Give”), Elliot’s daughter, is dropped back into his life, sent to live with dad by her mother (Melissa George).

Tragedy strikes at the end of the first episode of “The Eddy,” one that Netflix has asked us not to spoil but one that redefines the show, adding a mystery element that continues through the season, along with a heady dose of grief. If it sounds like a lot for a miniseries, it is, and the first couple episodes feel torn between a hazy, improvised jazz style and the more traditional structures of family drama and thriller. Chazelle clearly wants to just hang out at the club, but he’s not really a “hang out” director. His films are more about passion and drive, and less about extended jazz numbers in a Parisian nightclub. The contrast shows in those first two episodes, which feel like Chazelle is overcompensating with the shaky, verité camerawork and low lighting. It’s a very difficult show to put your arms around for the first two hours, even as the second one allows Stenberg the spotlight as Julie adjusts to going to school in Paris.

But as each chapter allows a different character time in the narrative spotlight, much like a jazz group presenting different solos, the entire piece comes more into focus. There’s a major shift in episode three, an episode about ritual that reminded me of “Rachel Getting Married” in its joyous representation of creative expression. And the show regularly finds moments of grace and beauty from that scene on, including what is basically a great little short film about lost love in the fourth episode about the band’s bassist Jude (Damian Nueva). With the structure being what it is, each episode almost plays like a standalone short film, digging into a different character while also moving the thriller and family drama aspects forward. The former works much better than the latter. Thorne and his team are clearly way more interested in the day-to-day lives of their musicians than the mystery that’s spawned in the series premiere, and you will be too. I’d give up literally all of the thriller scenes to spend more time with Maja and her mother, watch Amira (the excellent Leïla Bekhti) navigate an unexpected chapter in her life, or witness a new romantic relationship grow for Julie.

Luckily, Holland does his absolute best to hold the different parts of “The Eddy” together. Not unlike his character, he’s the ring leader, the character that the show comes back to and the man responsible for making sure all these different narrative instruments work well together. Holland is one of our best actors, a performer who always seems so absolutely in the moment that the artifice falls away. One of the hardest things an actor can do is convey the unspoken—when his character is actually listening, thinking, and living in the moment. Holland has those skills. Stenberg, a clear future star, is good here, although Julie sometimes feels like a device to push and pull at Elliot more than a well-rounded character on her own, especially early in the series. Everyone is good and several people, including Holland, Bekhti, Kulig, Adil Dehbi, Nueva, and Lada Obradovic are excellent.

Clearly, there’s a lot to like in “The Eddy,” but I always hesitate to tell readers that they need to be more than two hours into anything before it clicks. Most of us don’t have time for something that doesn’t grab us from the very beginning. Maybe it’s helpful to think of “The Eddy” like a trip to an actual jazz club. There are times, especially in the beginning, when you’ll want to go get a drink or take a bathroom break, but there are also incredible solos and moments when the whole band comes together to form something almost transcendent. Whether you focus on the highs or lows after the band has left the stage is up to you. 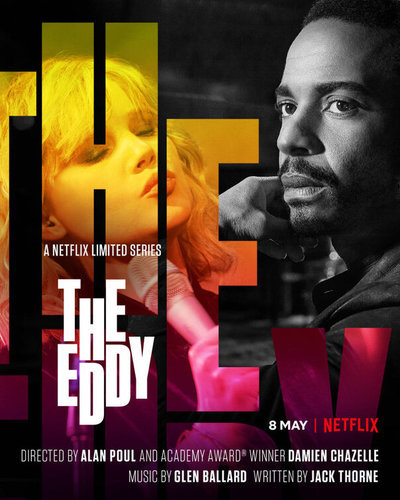