Every day that dedicated Mark Walker (Danny Glover) wakes up, he hopes it'll be the day the army puts the mental well-being of its soldiers over having boots on the ground. It’s been seven years since September 11th, and despite the American public’s want to leave Iraq, President Bush has instead ordered a surge. For some of the men and women who have already survived their tour(s) of duty, the emotional and mental scars have not healed. They’re looking for a way out.

Walker owns an internet cafe and community meeting space called The Drummer, wherein he meets with potential military clients searching for honorable discharges. His cases are never easy, and most of his clients have been AWOL or committed other crimes stemming from their PTSD. It’s Walker’s hope to win these cases so he might present these troops as anti-war activists, not unlike some of the soldiers who returned home from the Vietnam War, to protect other fighters in similar situations, and hopefully, help to end the conflict in the Middle East.

Glover, a producer on this anti-war drama, received the Academy’s Jean Hersholt Humanitarian Award for his real-life activism. He was also critical of the Iraq War in 2003, so the subject matter of “The Drummer” is fitting for the veteran activist-actor. Director Eric Werthman’s character-driven study about PTSD doesn’t break the mold for these narratives (such as “The Messenger” or “Thank You for Your Service”), but it does possess enough resonance, gifted by an assured Glover, to remind one of the human burdens of war.

However, the script written by Werthman and Jessica Gohlke initially wanders as it introduces a compendium of clients represented by Walker. They include Mike (Daniel K. Isaac), who went AWOL for over a year following an altercation with a fellow soldier. There's also four servicemen who have been caught drunk driving, and an erratic captain who crashed his motorcycle. Meanwhile, his field organizer (Frankie J. Alvarez) is trying to kick his psychiatric meds. These stories pull the focus away from the film's primary leads of Cori (Prema Cruz), an AWOL soldier, sexually assaulted by a superior, and Cooper (Sam Underwood), a soon-to-be redeployed husband and father battling hallucinations.

“The Drummer” finds its stride whenever it hones in on the multiple wars each character is fighting, such as Cori and Cooper against the government and their own mental health struggles. Meanwhile Glover imbues the character with a lonesome weariness, as a soldier of the Vietnam war, of the anti-war protests of the '60s, of mounting legal battles, and of his own night terrors of long-gone friends. Both Cori and Cooper trust him, and see a kindred spirit dealing with similar travails. Walker wants to enlist them in his cause, asking them to hold press conferences to share their experiences in the army, hoping the attention will spotlight the growing mental health crisis in the armed forces wrought by combat.

It’s not altogether clear why Walker, a veteran of several protest movements, would like these odds. These are fighters who’ve already given so much, and they aren’t prepared to wage a symbolic conflict with the all-powerful armed forces. Part of the narrative involves Walker learning this, but it’s strange he didn’t know it before.

The general mood of the era isn’t felt in the film either. In 2008, the country seemed at once on the brink of hope and at the brim of cynicism. Since the scope is limited solely to a military viewpoint, rather than including a civilian perspective, translating that sense for anyone who didn’t live through the period creates difficulty in this narrative. The sound design can also be too on the nose, like how Walker often hears the faint sound of choppers.

This is a movie that lives and dies by the performances, and thankfully well-calibrated character work abounds. It's the strain of sleepless nights smeared across Cruz’s face, or how she possesses two heart-wrenching scenes wherein a spontaneous overflow of emotion, sprouting from her recalling the harassment she endured, gashes tears down her strewn cheeks. Underwood plows equally harrowing ground, as a skittering nervousness pervades his folded-in frame.

But it’s Glover who once again reminds audiences of his dramatic range, enjoying the best chew of this lithe script. Whenever a panic attack strikes Walker, a rigidity gloms Glover’s body. As does a vacant stare, the kind of lostness that happens when you take a heap of your winnings and lose it on a turn of pitch and toss. Those shocks hit Walker often, and occur after a soldier declines his invitation to join the larger anti-war cause, or the moment when Cori is surprisingly arrested by MPs. Walker loses his faith, especially when tragedy befalls his movement only to regain his spirit once more.

“The Drummer” doesn’t work as a recollection of a frightening era, the flights of whose shrapnel we’re still dressing ourselves from. But it flourishes as a modest picture, an acute character study of men and women picking up the pieces of a patriotic ideal that seems to have failed them. 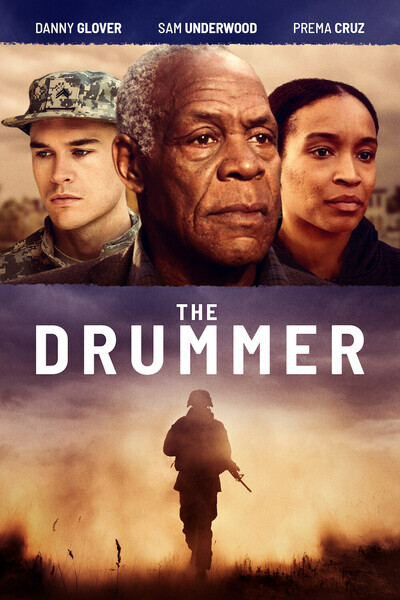