Throughout my many years as an avid moviegoer, I've seen more than my share of ridiculous movies—even deliberately seeking them out in a number of cases. I mention this only to assure you that when I say that the Godsploitation epic “The Devil Conspiracy” is one of the nuttiest films that I have ever borne witness to, I am not trying to be wildly hyperbolic. How nutty is it, you may ask? Consider the opening sequence, which recounts the Biblical battle between the Archangel Michael (Peter Mensah) and the rebellious Lucifer (Joe Anderson), and which ends with the former banishing the latter to an eternity of imprisonment in the depths of Hell. This is staid enough, I suppose, if you can overlook the murky look and somewhat dubious CGI imagery on display.

No, the moment of inspiration—if that is quite the word—comes when Michael arrives on the scene to finish off Lucifer’s confinement by shackling him to a seemingly unbreakable chain. Lucifer, while being dragged over, then remarks, “Is this really necessary?” I know we are barely two weeks into 2023, but I doubt that there will be a funnier line from a movie this year unless Elaine May went back to work without telling anyone. The rest of "The Devil Conspiracy" never quite hits that level of sublime silliness, but Lord knows it tries, no pun intended.

When the story picks up again in our time, the Shroud of Turin—that fabled length of linen that supposedly served as the burial shroud for Jesus and which allegedly bears his negative image—has been put on display and is attracting thousands of visitors a day. One of these visitors is disbelieving American art scholar Laura Milton (Alice Orr-Ewing), who has been let in by a friend, Father Marconi (Joe Doyle), to study an accompanying statue chronicling Michael’s defeat of Lucifer. Still there after hours, Laura witnesses a group led by the malevolent Liz (Eveline Hall) steal the Shroud and murder Father Marconi before stealing off into the night.

It turns out that Liz is the leader of a Satanic cult determined to free Lucifer from his chains, reincarnate him in the body of an unborn child, and allow him and his fellow demons to rule Earth. Alas, their efforts have been stymied because mortal bodies simply cannot hold up to the strain of Lucifer’s power and rage—only the infant Christ could possibly survive under those circumstances. It also turns out that Liz has a biological ace up her sleeve—Dr. Laurent (Brian Caspe), her evil geneticist partner, has devised a way of extracting the DNA of long-dead people to make clones. They then use the DNA from the Shroud to devise a fertilized egg that's implanted in Liz so that she can give birth to the end of civilization. (They evidently finance their more overtly evil endeavors by holding secret auctions of the cloned likes of Vivaldi and Michelangelo, the latter with an opening bid of ten million Euros.) Sounds foolproof, I know. But what they didn’t count on was that, as the result of his dying prayer, the late Father Marconi had his body taken over by Michael, who goes off in pursuit of a rematch with his former foe.

What we have here is a narrative that suggests a literally unholy amalgamation of elements taken wholesale from sources as varied as “Paradise Lost,” “Rosemary’s Baby,” and “The Boys from Brazil” as filtered through the literary voice—for lack of a more polite term—of Dan Brown in a manner that will have my editors questioning whether I need to adjust my medications. Perhaps realizing that whatever flimsy integrity Ed Alan’s screenplay has might dissipate if viewers are allowed to contemplate the narrative for more than a couple seconds, director Nathan Frankowski tries to avoid that by hurtling from one scene to another (including multiple journeys through a conveniently located gateway to Hell) at a breakneck pace. Unfortunately, this doesn’t quite pan out because the combination of the chintzy-looking effects, unconvincing-but-plentiful gore, and indifferently-staged action beats make it a bit of a slog.

For a while, I was almost willing to forgive “The Devil Conspiracy” its numerous artistic trespasses—like its clunky action and clunkier performances—because of the absolute absurdity of it all. However, towards the film's final third, "The Devil Conspiracy" starts reining in the craziness and becomes more familiar and repetitive, right when it should be ramping up to even madder heights. The biggest crush comes at the conclusion, an all-too-familiar climax that serves only to set up a sequel whose existence could only serve as a key indication that the Rapture is nigh. However, there's one additional sublime moment on a par with that opening bit, in which a Lucifer-infused Laura does her best impression of Isabelle Adjani in “Possession”—screaming, contorting herself, and power-chugging a gallon of bleach that she proceeds to vomit directly into Liz’s face—before finally being subdued and dragged away. Watching her go, we hear Liz wistfully murmur “That could have been me.”

Yes, “The Devil Conspiracy” is nuttier than the proverbial fruitcake and twice as difficult to swallow, regardless of where you reside on the theological spectrum. It's so nutty, in fact, a small part of me almost wants to recommend it on the basis that a movie this unhinged rarely gets a major release these days. Ultimately, I can’t do that—professional standards and whatnot—but if my description of its lunacies does inspire you to check it out for yourself, I can assure you that you're in for an experience that you won’t easily forget, no matter how hard you may try. 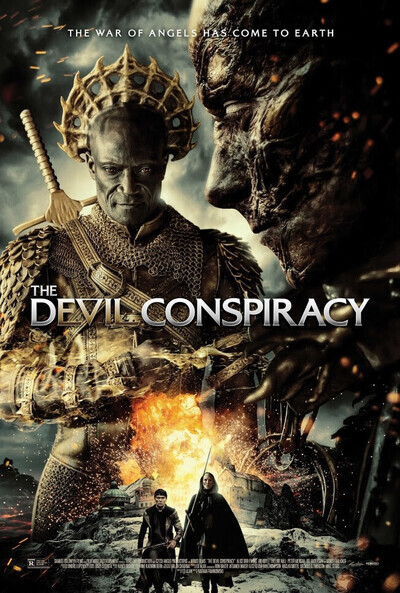 Rated R for strong violent content, some gore and language.

Spencer Wilding as Beast of the Ground