Going to the latest dystopian YA novel adaptation used to feel more like escapist fare. These movies had fantastical scenarios where teenagers discovered who they were and how they could fix the messed-up world around them. But the times have changed, and the stories haven’t. The narratives that once elevated the act of surviving adolescence into a hero’s journey now feel stale. With so much anxiety about the future in the real world, we don’t need entertainment to transport us into a dystopian one.

In this adaptation of “The Darkest Minds,” a mysterious illness kills almost all of the children and brings out superpowers in others. The adults-in-charge panic, rounding up surviving kids and teens to be put into closely guarded internment camps. The children are then segregated by a color-coded rubric that looks almost exactly like the Homeland Security Advisory System. Those wearing green scrubs are the lowest threat level—they’re mostly just really smart kids. Blue-level children can manipulate matter; those wearing yellow work clothes have the ability to manipulate electricity. If you’re ever unsure of what a kid’s abilities are, their eyes will shine with their corresponding color when they use their power.

Ruby (Amandla Stenberg) is a special one. She has orange-level abilities, which means she’s telepathic, complete with Jedi-like mind control and the ability to erase herself from people’s memories. Considered too dangerous to live, the government supposedly destroys any child who scores orange or red (fire-breathing destructors). She disguises herself as a green kid until her cover is blown during a test. A sympathetic doctor (Mandy Moore) helps her escape, but Ruby isn’t sure she can trust her. She runs off with three other escaped children—Liam (Harris Dickinson), Charles or “Chubs” (Skylan Brooks) and Suzume or “Zu” (Miya Cech)—hoping to find a promised land where kids lively safely away from the grown-ups.

It’s a promising start, but one that ultimately doesn’t quite deliver. The movie’s plot feels scant, as if it’s only skimming the surface of what it’s like to be a child who has no one to trust or turn to in this world. When Ruby accidentally erases herself from her parents’ memories, she experiences a traumatic moment of rejection, and it haunts her for the rest of the movie. Liam adopts a “for us, by us” ethos after a shadow group claiming to want to help children were instead training them to fight a war.

Director Jennifer Yuh Nelson (“Kung Fu Panda” series) isn’t able to elevate the kids’ fight for survival above its melodramatic trappings. In what’s supposed to be a symbolic rallying cry, Ruby pridefully shows her orange stripes by smearing Cheeto-colored powder across her forehead to other kids with blue, yellow and green smudges on their faces. The scene has no real narrative value, and just hangs like an incomplete thought. There are a few groan-worthy moments of bad dialogue, like the laughably obtuse refrain, “We don’t segregate by colors here.” Certain scenes just don’t work at all, like a painfully awkward dance scene in the film that’s so poorly staged, the camera feels like a grown-up supervising a gym full of eighth graders at a dance.

However, “The Darkest Minds” does manage to keep some of its bright moments shining. Stenberg does an outstanding job of exploring Ruby’s many conflicted emotions, like her want to see her parents again knowing that they don’t remember her. She’s sensitive, resourceful and pensive, bringing to mind Jennifer Lawrence in the first “The Hunger Games” movie. Her co-star Brooks easily has some of the best lines of the movie, taking every good opportunity for a quizzical look or smart retort. There are a few decent action sequences within the runtime, including a speedy car chase through Virginia highways. But there’s also less-than-stellar set pieces like the terribly rendered showdown between Ruby and another super-strong, Ayn Randian opponent who believes the powerful kids should run the show.

But some decisions defy explanation, like how the actress chosen to play young Ruby (Lidya Jewett, who does give a very endearing performance) doesn’t resemble her older counterpart. The adults in the supporting cast like Moore, Gwendoline Christie and Bradley Whitford are woefully underutilized. One irreparable issue seems to be traced back to the book. Zu, the only Asian American character on-screen for longer than a second, is mute, and the decision to stay true to the source brings up ugly stereotypes of docile and quiet Asian women.

When The Darkest Minds book was released in 2012, we didn’t have a government-sanctioned program to separate children from their parents. Conservative adults weren’t attacking teenagers over the issue of gun violence. The movie features a daily broadcast of the president’s lies. Now, that’s just today’s headlines. The environment in which stories like “The Hunger Games” or “Divergent” gained followings has changed, and “The Darkest Minds” has not adapted to survive it. 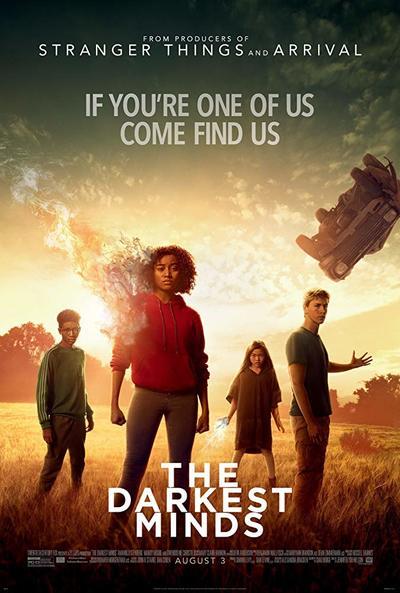 Rated PG-13 for violence including disturbing images, and thematic elements.