What it costs to stay alive

Even if you didn't know that Stefan Ruzowitsky's "The Counterfeiters" was a 2007 Oscar nominee for best foreign language film, you'd probably guess it was, anyway. This Austrian drama about the Nazis' top secret Operation Bernhard, the largest counterfeiting scheme of all time, is paradoxically all too good at fitting the horrors of the Holocaust into a prestige movie format. Predictably, it won the Oscar.

That assessment sounds harsh, and cynical, and it seems a shame to look at the movie that way. After all, "The Counterfeiters" is based on a fascinating piece of history, raises some wrenching moral dilemmas about the costs of survival under the Nazis, and was no doubt made with noble intentions beyond the usual commercial ones. The trouble is that the storytelling and filmmaking are routine (surely faux-documentary handheld camerawork is the most overused cliche in modern movies), even when the human drama is not.

"It takes a clever man to make money. It takes a genius to stay alive," says the movie's U.K. tagline. You may be reminded of the elderly Mr. Bernstein in "Citizen Kane," who says: "It's no trick to make a lot of money ... if all you want is to make a lot of money." When master counterfeiter Salomon "Sally" Sorowitsch (Karl Markovics) is arrested in Berlin, he's sent to a concentration camp and eventually put in charge of a team of inmates assigned to do just that: make a lot of money. Friedrich Herzog (Devid Striesow), the very man who apprehended Sorowitsch in 1936, becomes his Nazi overseer in Operation Bernhard, a scheme to print millions of British pounds and U.S. dollars to fund the Nazi war effort and undermine Allied economies.

For the concentration camp prisoners at Sachsenhausen, many of whom have labored under far worse conditions elsewhere, this assignment offers an opportunity to survive, perhaps for more than one day at a time. The men are given real beds, food, a weekly shower and something else of no-less-precious intangible value: a glimmer of humanity. One man breaks down and weeps when he sees a printing press again. Another says he had the same reaction when he was first chosen for this work detail: "It reminds you that you're human."

And that feeling of reconnecting to humanity leads directly to the film's core dilemma. Prisoner Adolf Burger (August Diehl), a fiery Marxist, argues that the detainees' cooperation with Operation Bernhard is aiding the enemy by fueling the Nazi war machine. Sorowitsch counters that each man must do what he has to do to survive. As Burger (the real-life author of this story) surreptitiously undermines their efforts, Sorowitsch finds himself trying to protect the saboteur (and would-be martyr) from both the Nazis and his fellow prisoners, while keeping all of them alive.

"The Counterfeiters" also exhibits the requisite caricature of the unspeakably Evil Nazi whose sadism and cruelty are shocking. Like the blatant bigots in "Crash" (2005), this places the onus on easily identifiable individual villainy rather than the more significant but insidious evil, which is any culture that institutionalizes inhumanity. That is not to assert that bigots and sadistic Nazis are not terrifyingly real, because they are. But a drama that focuses on personal depravity indirectly relieves others of complicity. And moral complicity is what this movie claims to be about.

It's not so much the Evil Nazi within us that we should fear but the Good Nazi -- as embodied in this film by the slippery Sturmbannfuhrer Herzog, an ambitious and amoral opportunist who wears a swastika at work and a cardigan on weekends. The most chilling and penetrating moment belongs to Herzog as he announces his post-war aspirations: "I'm interested in managing people. That's where the future lies." Spoken like a true bureaucrat. Look deep into the Holocaust's heart of darkness, and you'll find middle-management, the banality of evil personified. 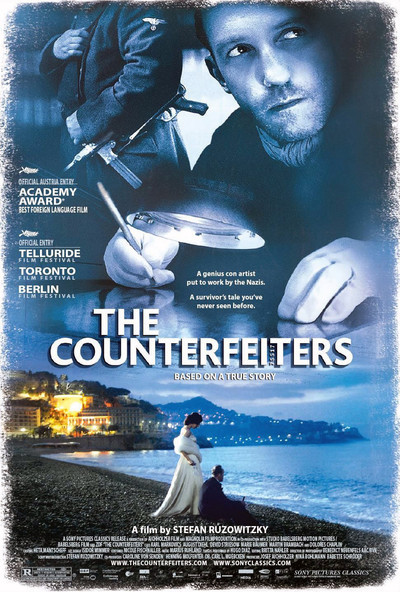 Rated R for some strong violence, brief sexuality/nudity and language