"The Christmas Candle" is a determinedly retro-minded holiday saga that contains no foul language, gruesome violence indeed anything beyond the mildest suggestion of hanky-panky, and for a certain portion of the moviegoing public, these absences alone would be enough to warrant a recommendation. The trouble is that the filmmakers have also neglected to include such other elements as wit, style, energy or anything resembling a coherent narrative. The end result is the kind of vaguely distasteful Yuletide concoction that viewers normally find playing on cable channels that they don't even realize that they have.

Based on the book by Max Lucado, the film, set in 1890, begins as Reverend David Richmond (Hans Matheson), an idealistic man of God who has lost his faith, accepts a new position in Gladbury, a quaint little English town that appears to have been built from the remains of the sets from a road company of "Oliver." Upon his arrival, he learns the town's odd secret. It seem that every 25 years during the Christmas season, an angel arrives at the local candle shop, owned by the Haddington family for generations, in order to bless one of their candles so that the eventual recipient will receive a miracle after saying a prayer and lighting the candle.

This strikes Rev. Richmond as utter nonsense and he tries to convert the townspeople from a candle-based form of faith to something more pragmatic by encouraging them to be miracles to each other via good deeds and simple acts of kindness. For a while, this progressive agenda seems to be doing the trick, but when Richmond tries to push his luck by installing some of those new-fangled electric lights in the church, the modern touch results in something more akin to Carrie's prom than the usual advent service. Throw in a mix-up involving the Christmas candle, and it appears that the hopes and prayers of all of Gladbury are doomed to go unheeded. After all, it would take a miracle for things to turn around, and what are the chances of that happening in a holiday-themed entertainment?

"The Christmas Candle" has received a bit of notoriety because it was produced by Echolight Studios, a concern whose CEO is none other than failed conservative presidential candidate and sweater-vest enthusiast Rick Santorum. Because of his presence behind the scenes, it is tempting to comb through the film for any possible references to his political agenda. For example, we are introduced early on to a spunky and modern-minded shopgirl (Samantha Barks, whom you will recall for being one of the only worthwhile elements of last year's monstrous adaptation of "Les Miserables") but before too long, she is reduced to her presumed proper position of spooning broth and gazing adoringly at Richmond. Another character is a spinster whose sole prayer is to find herself a husband in order to make her life complete. To make matters even more amusing, this particular character bears a passing resemblance to none other that Rachel Maddow.

However, the reasons that the film doesn't work—and it doesn't—have less to do with politics and more to do with the fact that the story makes precious little sense even by holiday fable standards. The point of "The Christmas Candle," I think, is to illustrate how the two versions of faith being depicted—praying for miracles to happen and working to make them happen—are not mutually exclusive and in fact work best when they work in tandem rather than at odds. And yet, the film seems to go to great pains to have both Richmond and the Haddingtons fail miserably in their various attempts until (Spoiler Alert!) a miracle or two arrives out of nowhere to put everything straight.

Another problem is that even though the story wants to be as folksy and down-to-earth as possible, the thing has been so cynically constructed to press the audience's buttons that it is easy to grow resentful towards it. In its efforts to jerk tears, the film gives us, among other things, the blind, the infirm, several people dead or dying of consumption, an adorable urchin who has been mute since being orphaned and a poor lass who discovers that she is pregnant in the first act and then, in accordance with Chekhov's dictum, goes off in the third. One or two of these would have been more than enough to sustain a normal movie, but this one tosses so many into the mix that a montage is required to get through all the epiphanies in the finale, and as a result none of them create even a fraction of the emotional impact they were clearly meant to have.

For every Christmas-themed film that beats the odds and goes on to become perennial—your "It's a Wonderful Life" or "A Christmas Story" or "Die Hard"—there are any number that arrive each year and quickly sink into well-deserved obscurity. "A Christmas Candle" definitely falls into the latter group, and as candle-based religious-themed tales go, it probably will not be replacing Hanukkah anytime soon. 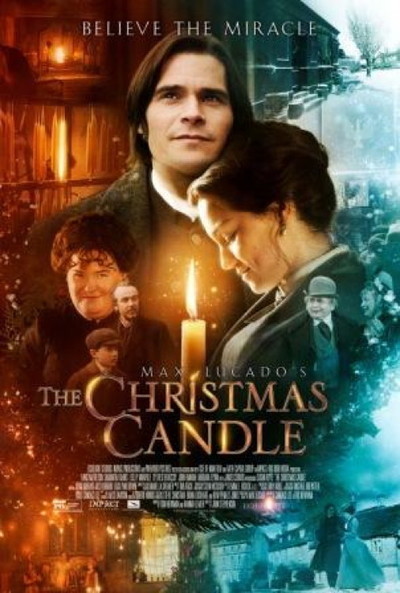