Youth may be rebellious but adulthood can be repellent. Maturity certainly fails to equal responsibility or morality in HBO’s mini-series “The Casual Vacancy,” premiering tomorrow night, April 29th, 2015, and finishing up the next night. It’s an import from the BBC adaptation of J.K. Rowling’s first non-“Harry Potter” novel that sometimes threatens to drift away on its own casual tone, but raises enough interesting conversation points about the potential for the avarice of government to supersede the purpose of it that it’s worth a look. Every element that doesn’t quite work in “The Casual Vacancy” is offset by a legitimate reason to check it out, at least until the muddled ending. This may not be on the level of HBO’s striking “Olive Kitteridge”, but few things are.

Like “Olive”, “The Casual Vacancy” starts off feeling like a character piece more than a morality tale (and ends up too much like the latter). A quant English burg named Pagford is in the middle of a class and age war. Graffiti has been popping up around town, usually of the sexually explicit nature, and there’s a growing drug problem. Barry Fairbrother (Rory Kinnear, who recently appeared in “The Imitation Game”) is a more forward-thinking, benevolent councilman, the kind who advocates for welfare and even takes troubled people under his wing for advice, including Krystal (Abigal Lawrie). Barry seems to be single-handedly swinging the vote against the more conservative faction of the city council, led with satirical glee by Michael Gambon and Julia McKenzie. And then poor Barry has an aneurysm.

The title “The Casual Vacancy” refers to the council seat that needs filling on a textual level, but also has deeper meaning. It is referenced in a dream sequence as referring to a grave—something that’s not empty for long after its creation—and carries over into how much people can be absent from each other’s lives, whether it be an abusive father or a junkie mother. Few vacancies are actually casual in this world. They’re just perceived as such.

The mad scramble to fill Barry’s seat leads to an upheaval in Pagford. Three nearly worthless candidates—one maniac and two milquetoasts—come forward for the job, but Rowling is more interested in how death and the process of government impacts those run by it. I have not read Rowling’s book, but it is apparently much more tragic than Sarah Phelps’ adaptation. The screenwriter has pulled back on some of Rowling’s darker, more deeply cynical tones, resulting in a mini-series that sometimes lacks the urgency that it might have had on the page. It’s the kind of character-driven dramedy that often works better on the page than it does in film. “Olive Kitteridge” overcame this by giving us such a strong, vital, central character. There’s not really one of those here as Barry himself, who “returns” when a blog reveals everyone’s secrets under the guide of “The Ghost of Barry Fairbrother”, casts the longest shadow in Pagford.

“The Casual Vacancy” gains most of its value from a striking debut performance by Lawrie as Krystal, a character introduced wearing such an inappropriate outfit to her school that it makes the headmaster cry. Krystal’s mother is a junkie and she knows she’s basically seen as little more than an object of desire for her male classmates, but Lawrie doesn’t play her as a tragic case. She finds the energy underneath the character in a way that reminded me of Katie Jarvis’ amazing performance in Andrea Arnold’s “Fish Tank”. She's really one to watch.

There’s something thematically engaging about how the death of a good man makes other people either try to find the goodness within themselves or reveals the lack thereof. And the influence of good deeds linger past death, and often increase as we remember key moments from those who are no longer with us and place greater importance on them. I became increasingly interested in how these themes would play out in “The Casual Vacancy,” and then Phelps misses the target widely in the final scenes, adjusting the ending of the book in a way that just doesn’t seem right here. (Although I’m not sure the book’s ending would have been earned by the tone of this adaptation either.)

We can’t avoid death or government, even in small-town England. They are inevitabilities and the best parts of “The Casual Vacancy” reveal how they intertwine into everyday life in ways we may not fully understand until we gain the clear vision of hindsight. 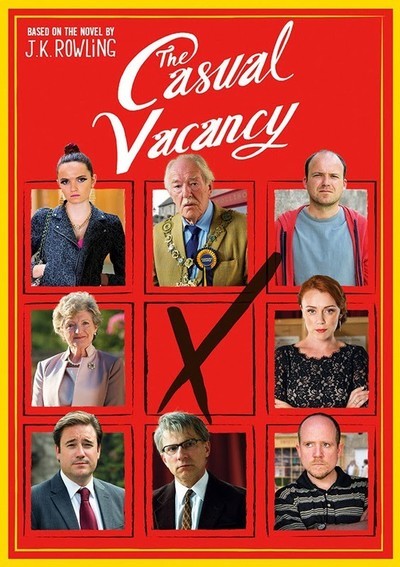