Colorful elements of “Fargo” and “Seven” blend into a bland beige in the mostly straight-to-video “The Calling,” a piece that almost miraculously finds a way to waste the prodigious talents of Susan Sarandon, Ellen Burstyn, and Donald Sutherland. A serial killer that isn’t interesting, a flat attempt at procedural, all the atmosphere of an episode of a bad TV drama, and nary a performance that the actor or actress would like you to remember come tomorrow—“The Calling” is a depressingly bad movie, the kind of film that leads to sympathy for those involved if you can get past the anger of having wasted your time and money on it.

Detective Hazel Micallef (Susan Sarandon) barely polices the sleepy town of Fort Dundas. The small Canadian burg doesn’t need much police work and so the fact that the wickedness of age and alcoholism are eating away at Hazel’s stamina doesn’t impact her day job much. Along with fellow small town cop Ray Green (Gil Bellows), she can get the job done. In fact, there may not even be much for the new officer Ben Wingate (Topher Grace) to do on a day-to-day basis.

Of course, all of this changes when Hazel finds the body of a local friend from church sitting in a living room chair without a head that’s completely attached. Her throat has been nearly severed completely and her mouth has been painstakingly put into an artificial scream, a technique that we’re informed would take about an hour post-mortem as the killer holds the mouth open and waits for rigor mortis to set in. Creepy, right? Things get even more disturbing when someone else, in another jurisdiction but not too far for Hazel to notice, ends up with part of their stomach removed the hard way. There’s a serial killer in Canada. Can Hazel and new guy Ben get to the bottom of it?

It’s no spoiler to tell you who the serial killer is because director Jason Stone sets up “The Calling” more as a cat-and-mouse game than a mystery (one of many miscalculations). And so, early on, we meet Simon (Christopher Heyerdahl), a man in a long black coat with a bag that portends evil to come. Simon is a soft-spoken and yet notably creepy tall gentleman, who seems to want to help, such as with the sick daughter of a waitress he meets, but the film telegraphs his malevolence with every exaggerated framing or underlining score. Hazel and Ben follow Simon’s path of destruction while we learn of the serial killer’s religious motives and hope to God that the film has a surprise or two up its sleeve. Spoiler: it doesn’t.

Sarandon, at first, seems to be sketching a lived-in character, someone exhausted by life and just looking for a place to put her feet up, pour a drink, and read a book. She’s well-cast for a role like that but “The Calling” never lets her develop a character, pushing her into a thriller plotline that even she appears bored by. Ellen Burstyn pops up as her mother, which should be amazing given the talent of these two actresses, and the resulting scenes prove that even the most remarkable casts can’t save lackluster scripts and leaden direction. Donald Sutherland appears in not one but two scenes to explain the plot. I’m not kidding. They were probably storyboarded as “Donald Sutherland Explains the Movie.”

To be fair, there are a couple of sinister beats, such as when Ben approaches a camper that we can just sense is going to house a whole bunch of ugly, that work in the simplest of thriller terms. And the cast, as they often do in failures like this, will walk away clean and move on to the next project. You should just skip this one and join them. 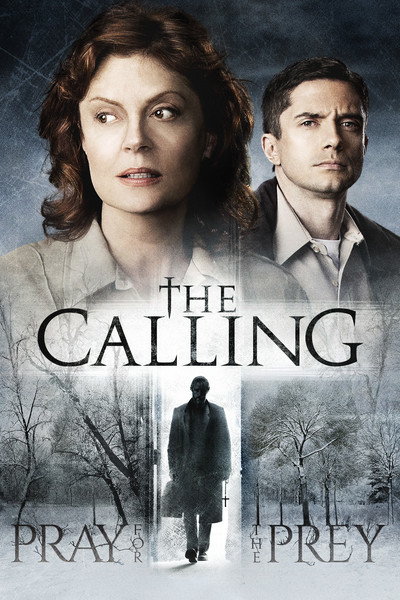 Rated R for violent content, disturbing images and some language