If you feel you’d somehow get a kick out of imagining a world of total booze-and-substance-free sobriety in the days of quarantine, then look no further than “The Binge,” a tedious and only occasionally amusing comedic riff on “The Purge” franchise. Though I suspect this prohibition-themed satire enmeshed with a near-future dystopia will be no grown-up’s idea of a good time, as the whole thing is only as provocative as secretly drinking light beer in public out of a paper bag.

Part of the problem here is inadequate world-building by screenwriter Jordan VanDina and director Jeremy Garelick, whose screenwriting credits include the disarmingly insightful relationship dramedy “The Break-Up.” Unfortunately, no akin perceptiveness exists here, which is made even worse by an innate assumption that if booze and drugs were to be taken away from the society all year except for one continuous 12 hours, hilarity will ensue. Well, it objectively doesn’t, mostly because we never feel sure what’s so different or better about this bland new world, whose citizens just lack access to fun things. And why the young ones of this alternate civilization are so fiercely motivated to go on a binge if the culture they were raised in is so unaware of drunken pleasures, with its adults actively going out of their ways to badmouth even the most innocent of stimulants.

While none of this is fleshed out, we at least get a customary montage of the olden days of Just Say No at the start to introduce us to the premise. (The medley is voiced by someone un-credited on IMDb, a narrator who sounds like a less persuasive version of Morgan Freeman.) And during the film’s remaining drawn out running time, the audience has to do some substantial work to fill in the blanks about what tickles this seemingly innocent universe. In the one-eventful-night tradition of “The Hangover,” “Superbad” and “Booksmart”—all far superior movies—“The Binge” sets its sights on a duo of friends who have just turned 18 and can thus participate in their town’s biggest Binge party. One of them is the college-bound Griffin (Skyler Gisondo), who is reluctant to go on the lash but will try anything once if it earns him a date with his crush Lena (Grace Van Dien). The other is his spirited best friend Hags (Dexter Darden), overeager to finally find out what the fuss is all about. Because he has access to VIP wristbands that could get them into the bash of the year and a beyond-ridiculous self-invented vehicle that requires group pedaling, the duo recruits school’s resident geeky recluse Andrew (Eduardo Franco), a character clearly invented to fill in for the McLovin spot, as their third.

Every story of this sort needs a good villain. “The Binge” gives us a passable one at best with Principal Carlsen (played by A-lister Vince Vaughn). The overprotective father of Lena who will stop at nothing to protect the innocence of his young daughter, Carlsen proves to be a generically stern yet humorously corruptible character, the kind Vaughn can play in his sleep. (While his presence enlivens the film, Vaughn’s performance can’t help but feel dutifully phoned in.)

You can probably imagine the whole playbook from here on out. There is an all-night pursuit, unattainable cool girls, crooks with ulterior motives and a central friendship that’s about to enter its next phase. Along the way, “The Binge” scores a pair of smiles and heartwarming moments between the high-school buddies who come to terms with their evolving relationship—things like class and white privilege get only teased here sadly, instead of maturely explored. On the whole, the biggest crime of “The Binge” is its poor handle on humor. Its genuine belly laughs are so few and far between that it’s almost like the filmmakers just believed in the premise’s inherent comedic potential, and gave up on working in some actual jokes into the mix. You come to “The Binge” for a nice strong craft cocktail, but leave the fête with something closer to a square fruit punch. 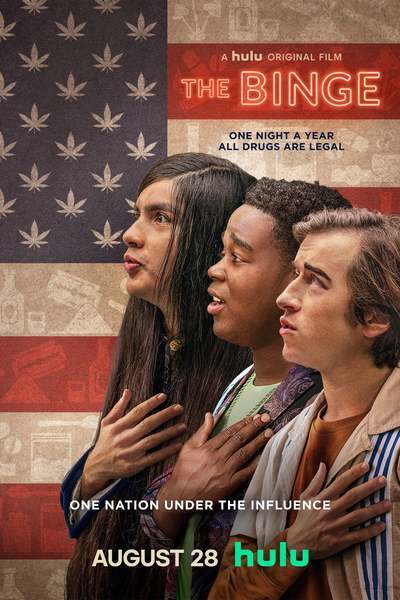