If you grew up reading storybooks about small family farms stocked with ducks and pigs and lambs and loyal sheepdogs, the documentary "The Biggest Little Farm" will probably make you happy. Its main characters (one of whom is also the filmmaker) left urban life and got into farming because they'd spent their entire lives carrying around those kinds of nostalgic images in their heads. The reality of farming proves to be a lot less rosy, of course—a fact telegraphed in the movie's ominous flash-forward opening, which heralds a Biblically-scaled natural disaster that the farmers will have to survive somehow.

But all in all, this is a very likable, if sometimes a bit too polished and vague, exercise in environmental philosophy and rural nostalgia, about a couple of well-off, upper-middle-class professionals (respectively, a documentary filmmaker and a chef and organic food blogger) who decide to chuck it all and go back to the land, conquer adversity, and do pretty well for themselves, all things considered.

Apricot Lane Farms, which is located in Moorpark, California, is a Nuevo-old fashioned farm, predicated on the idea that biodiversity is the best and most moral strategy for raising crops and livestock. The website says the farm uses "regenerative soil methods" that make food taste better, and that the entire space is "a micro-ecosystem managed through methods best described as biomimicry, mimicking the biological balance found in our earth’s ecosystem that allows for a less destructive and healthier farm." Some of the details about how, exactly, John and Molly Chester made this farm a reality feel like they might've made for an interesting movie in themselves, albeit one that would have spoiled the fairy tale nature of the origin story presented here.

Supposedly the Chesters got the idea to move to a farm because a dog they'd adopted, Todd, was so badly behaved that their landlord evicted them from their apartment. Not many of us can afford to just pick up and move on short notice to give a better home to a dog, much less to a 240+ acre farm that's been envisioned as a self-contained ecosystem experiment. Livestock, seed, labor and equipment are all expensive, and aside from a fleeting reference to "some investors who saw this old way of farming as the future," there are no details about how they made all this happen, only that they did. The adorable animated interludes; Jeff Beal's Aaron Copland-esque, Americana-saturated score; John Chester's "And then I learned..." narration, and the many lyrical images of the Chesters and their employee backlit by honeyed sunlight, are all a bit much at times: more selling than telling.

But once the Chesters get settled in and realize just how many moving pieces there are on even a small farm, the movie starts to feel more grounded and transparent. The farmers are repeatedly required to figure out solutions to urgent, everyday problems, such as how to stop snails from infesting their lemon trees, how to keep coyotes from killing their ducks without having to kill the coyotes, too, and how to get an orphaned lamb to adulthood without having to put it down prematurely. "The Biggest Little Farm" is most fascinating as an account of people who made a dream come true, then realized that keeping it alive is hard, often heartbreaking work. 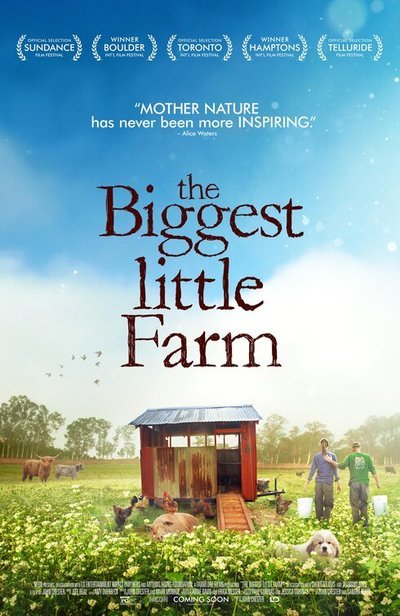