"The Big Ask", which was once called "Teddy Bears" and now perhaps renamed in a nod to "The Big Chill" given the similar set-up of lifelong friends dealing with death, is a weird little movie. It features a central protagonist who’s simply not likable, supporting characters who serve as little more than plot devices for its lead, and a flat tone that somehow seems to soften even its most likable stars. The array of TV veterans assembled for the film don’t necessarily do anything wrong, and their charisma sometimes translates from small screen to big, but, as is so often the case with the indie dramedy, an unrealistic script lets down a talented cast.

Andrew (David Krumholtz) is not dealing well with the recent death of his mother. After leaving therapy, he convinces his friends to go with him on a desert vacation. They’ll hike the mountains, play some games, and Andrew will sleep with his best friends’ girlfriends. Not secretly. He lets them know first that this is what he needs. You see, Andrew, despite having his own loyal companion in Hannah (Melanie Lynskey), believes that the way to healing is through what he calls an "injection of love" that can only be achieved by having a 4-way with Hannah, Emily (Gillian Jacobs of "Community") and Zoe (Ahna O’Reily), girlfriends to Owen (Jason Ritter) and Dave (Zachary Knighton of "Happy Endings"), respectively.

Of course, Andrew’s bizarre request sends ripples through the other couples. From Screenwriting 101, one of the female partners wants to leave immediately; one wants to help Andrew out. At the same time, Dave asked Zoe to marry him before the trip and she hasn’t responded; never a good sign. Owen is secretly in love with Hannah. And things get truly weird when Andrew finds a dog who belongs to a local land owner (Ned Beatty) and keeps him hidden. Is the dog a symbol for Andrew’s grief? A plot device? Neither? Both? You'll stop caring before long.

Films about friends on vacation require serious character work, the kind of depth of writing that makes the relationships instantly believable, so we care when they crack. It’s so hard for a screenwriter to convey the way lifelong friends communicate, fight, make up, and want to kill each other in the same moment that they can also feel true love. It’s why there are so few quality films about friends in crisis and yet so many that feel false. "The Big Ask" is a film that uses the manipulative devices of grief and sex to drive a lackluster plot instead of providing anything genuine in terms of character. To be blunt, I didn’t buy it.

Without a believable script or any real visual style to note, the small charms to be had here and there in "The Big Ask" all come courtesy of the cast. While Krumholtz can’t handle some of the darker material, the young men and women cast as his friends all deliver on the admittedly thin characters they’ve been given. Lynskey, in particular, so often finds ways to elevate lackluster screenwriting, and does so again here. She's the best thing about the movie. Ritter, Knighton, Jacobs, O’Reilly—none of them really falter, they just get left behind by a so-so script that starts with a sitcomish premise and then pretends that it’s deep and meaningful enough to say something about the human condition and how it manages grief without asking if it really is. 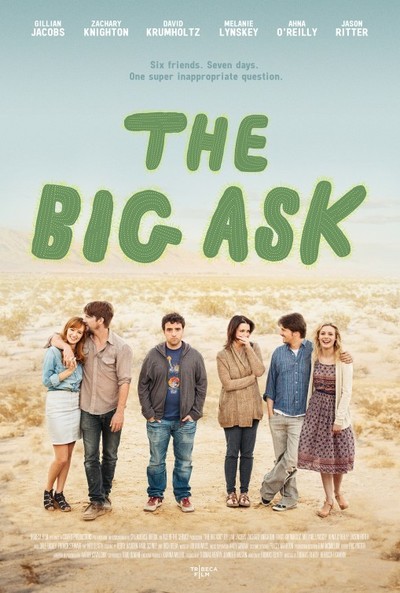