The home front is also not without its casualties

Homer thinks maybe they should stop at his Uncle Butch's saloon for a drink before they get home. "You're home now, kid," the older man Al tells him. Three military veterans have just returned to their hometown of Boone City, somewhere in the Midwest, and each in his own way is dreading his approaching reunion. Al's dialogue brings down the curtain on the apprehensive first act of William Wyler's "The Best Years of Our Lives" (1946), the first film to win eight Academy Awards (one honorary) and at the time second only to "Gone With the Wind" at the U.S. box office. Seen more than six decades later, it feels surprisingly modern: lean, direct, honest about issues that Hollywood then studiously avoided. After the war years of patriotism and heroism in the movies, this was a sobering look at the problems veterans faced when they returned home.

The movie centers on the stories of the three men. Al Stephenson (Fredric March), in his 40s, was an infantryman and is now returning to his family and the bank where he worked. Fred Derry (Dana Andrews) was a crew member on a bomber. Homer Parrish (Harold Russell) was a Navy man who lost both hands and now uses steel hooks. "You gotta hand it to the Navy," Fred tells Al, as they watch Homer walk slowly from their taxi to his front door, "they sure trained that kid how to use those hooks." Al says: "They couldn't train him to put his arms around his girl, or to stroke her hair."

That's why Homer wanted to stop for the drink. When he left for the war, he had an understanding with Wilma (Cathy O'Donnell), the girl next door, but now he fears how she will react to his artificial hands. The other men have fears, too. Fred, raised in a shack by the tracks and working as a drugstore soda jerk when he enlisted, quickly married the sexy Marie (Virginia Mayo), who has stopped writing him. Al has been married for 20 years to Milly (Myrna Loy), and has a son Rob (Michael Hall) and a daughter Peggy (Teresa Wright). They welcome him home with love and hugs, but he doesn't feel right; his children have changed, his life has changed, and after Rob goes to bed he suddenly remembers Butch's bar and suggests his wife and daughter join him for a celebration.

The other two men also turn up at Butch's. Homer couldn't take the exaggerated kindness and suppressed grief he thought he sensed from his parents and Wilma. Fred didn't find anyone at home at Marie's apartment. The three men get plastered together, with Al's wife looking on with superhuman understanding. That's the night Fred and Peggy have their first conversation, and begin to fall in love.

The movie's screenplay, by Robert Sherwood, moves confidently among the problems faced by the three men; unhurried and relatively low-key, this isn't a fevered docudrama. It becomes clear to Fred that Marie is a party girl who isn't interested in life on his drugstore paycheck of $32.50. Homer coldly tries to force away Wilma because he doesn't want her pity. Al gets a promotion at the bank, and is in charge of giving loans under the G.I. Bill, but rebels when he's asked to trust an applicant's collateral more than his character. Al turns to drink, and has a half-sloshed, half-heroic moment when he speaks his mind at a company dinner.

The film makes no effort to paint these men as extraordinary. Their lives, their characters, their prospects are all more or less average, and Wyler doesn't pump in superfluous drama. That's why the movie is so effective, and maybe why it doesn't seem as dated as some 1946 dramas. But Wyler employed remarkable visuals to make some of his points. He was working with the great cinematographer Gregg Toland, known for his deep-focus photography on such films as "Citizen Kane," and often Wyler uses deep-focus instead of cutting, so that the meaning of a scene can reveal itself to us, instead of being pounded down with close-ups. Consider a scene in Butch's where Homer proudly shows how Butch (Hoagy Carmichael) has taught him to play piano with his hooks. Al and Fred look on, and then Fred walks to a phone booth in the far background to make a crucial call. The camera doesn't move, but our eyes follow Fred's movement to the booth, and we focus on a decision he is making.

One of the movie's most famous sequences involves Fred deciding to leave town in search of work, and going to the airport. While waiting for his military transport flight, he wanders into a vast graveyard of mothballed warplanes. This scene is heartbreaking. Once Fred flew these planes, and now they, and their pilots, are no longer needed. The payoff of the scene is deeply ironic.

And consider the film's extended closing scene, when Homer and Wilma get married. Fred and Peggy are among the guests. Earlier they have told each they they are in love, and Peggy vowed to her parents she would break up Fred's mistaken and miserable marriage. But Al warned Fred away from his daughter -- one reason he was leaving town, even though the tawdry Marie is filing for divorce.

Wyler shows the entire marriage ceremony, all the way through, starting with Carmichael playing the wedding march, and the lovers exchanging vows. There are two parallel lines of suspense. One involves the marriage itself, and whether Homer's hooks can slip a ring on Wilma's finger. The other involves Fred and Peggy on opposite sides of the same room, their eyes locked as they hear the wedding vows being pronounced. Deep focus allows Wyler to show both of these events at once, and his framing draws our eyes to the back of the shot, where Teresa Wright, never prettier or more vulnerable, doesn't move a muscle.

"The Best Years of Our Lives" doesn't use verbal or technical pyrotechnics. It trusts entirely in the strength of its story. One of the sources of its power is the performance by Harold Russell, the handless veteran. Producer Samuel Goldwyn was actually criticized at the time for his "tasteless" use of Russell, but look at the heartbreaking scene where Homer invites Wilma up to his bedroom -- not to make a pass, but to show her what is involved in getting ready for bed. He thinks maybe then she'll understand why he doesn't think he can marry her.

Russell was an untrained actor, but utterly sincere. He says: "This is when I know I'm helpless. My hands are down there on the bed. I can't put them on again without calling to somebody for help. I can't smoke a cigarette or read a book. If that door should blow shut, I can't open it and get out of this room. I'm as dependent as a baby that doesn't know how to get anything except to cry for it." WeknowRussell is speaking for himself, and the emotional power is overwhelming. O'Donnell's response is pitch-perfect.

Russell won an honorary Oscar, "for bringing hope and courage to his fellow veterans through his appearance." Although he was actually nominated for best supporting actor, the Academy board voted the special award because they thought he didn't have a chance of winning. They were wrong. He won the Oscar, the only time an actor has been given two Oscars for the same role. The film also won for best picture, actor (March), director, screenplay, editing and score.

As long as we have wars and returning veterans, some of them wounded, "The Best Years of Our Lives" will not be dated. The movie is available on DVD, but there are no bells and whistles, and it calls out for a special edition or the Criterion treatment. I agree with Noel Megahey atDVDTalk.com: "Some other studios might regard a film that won eight Oscars as a major back-catalogue release but not MGM. The DVD presentation of the film is barely even adequate as a barebones release, with ... not a single feature to support the film's historical and cinematic importance."

Note: The film is said to have inspired one of Samuel Goldwyn's famous Goldwynisms: "I don't care if the film doesn't make a nickel. I just want every man, woman, and child in America to see it." 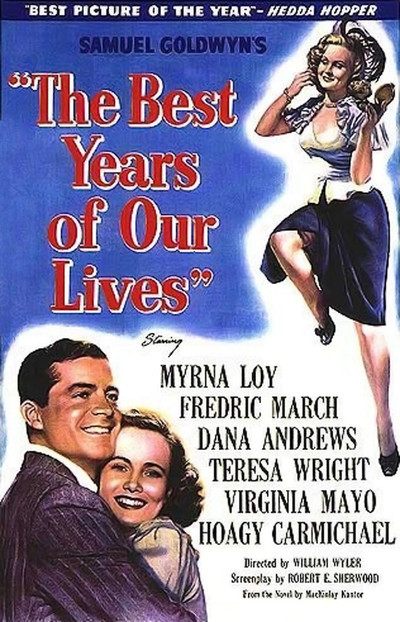