Giuseppe Tornatore's "The Best Offer" features the downfall of an uptight main character, played by Geoffrey Rush, led through a symbolic fairy tale forest to his own ruin. There's even a princess locked up in a tower, and the bread crumbs through the forest take the form of little mysterious rusty gears, which when put together create an 18th century automaton that threatens to take on a life of its own. The magic here is ominous and seductive, and Virgil Oldman (Rush) can't seem to stop himself from getting deeper and deeper into the forest. It's all a bit overheated, and while there is certainly nothing wrong with melodrama, the problem arises when the script (also by Tornatore) keeps insisting on explaining its own symbolism and subtext, to make sure we get how deep the thing is. The script here is a 5-page term paper with too many footnotes, filled with lines like "Human emotions are like art. They can be forged." Get it? There's altogether too much of that going on: what's the point of having a symbol if you don't explain it to death?

Geoffrey Rush plays Virgil Oldman, an auctioneer who runs a high-end valuation business, poring through the antiques of others and putting together auction catalogs. He specializes in spotting forgeries from the actual article. He is a pained and isolated man, who eats alone in a plush restaurant, where the wait staff hover around him anxiously. He lives in lonely splendor in a penthouse apartment filled with statues and artwork, complete with a secret room filled with his favorite paintings (all of women, giving Virgil creepy shades of Bluebeard). He always wears gloves. He has no friends. Well, except for a brilliant young mechanic named Robert (Jim Sturgess), who fixes ancient equipment in a gigantic storefront in a posh section of town, making you wonder how the hell he can afford rent on such a joint. Robert never rises above his role as a blatant plot device, a phony "listening ear" to Virgil so that we can know what Virgil is thinking.

Early in the film, as we see Virgil doing his business, some of it upfront, and some of it shady (with a partner-in-crime named Billy Whistler, played by Donald Sutherland), he gets a mysterious phone call from a woman named Claire (Sylvia Hoeks). Claire's parents just died unexpectedly and she needs someone to come to her manor and take a look at all of their stuff. Virgil is a cagey individual, but there is something compelling about Claire's voice over the phone. She doesn't show up for their first meeting, enraging Virgil, and then she calls back later with a half-baked story about a car accident and an emergency room visit. This happens again. And again. By this point, a huge team of assessors have taken over Claire's mansion, and Virgil has bonded with the caretaker, who has worked in the manor for years but admits that he has never seen Claire in the flesh.

Virgil becomes obsessed with the unseen Claire, in a manner reminiscent of the hard-bitten Dana Andrews falling in love with the painting of Gene Tierney in Otto Preminger's "Laura". Claire's phone calls get more panicked and tearful, and finally, in one tense scene, Virgil hides behind a statue after hours at the mansion so he can get a look at her, she who only comes out of her room (which is hidden behind a trompe l'oeil mural) when everyone is gone. Claire is young and pale, wandering around freely, chatting on the phone with someone she calls "Director", all as Virgil, drenched in sweat, looks on.

There's so much going on it's hard to keep track of it, but the script keeps reminding you of its primary symbols. There's the forgery theme, there's the automaton theme and its questions of life and identity, all of which were handled better in "Certified Copy" and "Hugo", not to mention dystopian noir melodramas like "Blade Runner". There is no reason for Virgil and Jim to be friends, and for Virgil to start to confide in Jim about his obsession with Claire strains belief. Since we don't see Claire for the majority of the film, when she does appear we are as curious about her as Virgil is. She's an agoraphobic who has never been outside the house since she was a teenager. Unfortunately, the film gives her a veritable makeover scene, straight out of the "Pretty Woman" playback, albeit a more creepy version. We are even treated to a graphic sex scene between Virgil and Claire, and while we are clearly not meant to think that this is a healthy pairing, it's still skeevy. Isn't there a more interesting way to handle an imprisoned princess than this tired cliché?

The film looks amazing, thanks to the lush and detailed cinematography of Fabio Zamarion. Claire's mansion is a masterpiece of production design and art design (Maurizio Sabatini and Andrea Di Palma, respectively). The house looks both earthy and magical at the same time, a place where one could conceivably hide forever.

Early in the film, Virgil says to his shady sidekick, Billy, who is also an aspiring artist, "The love of art and knowing how to hold a brush doesn't make an artist." What makes art, according to Virgil, is an "inner mystery". With good performances and a gorgeously moody look and feel, "The Best Offer", nevertheless, is missing entirely that "inner mystery." 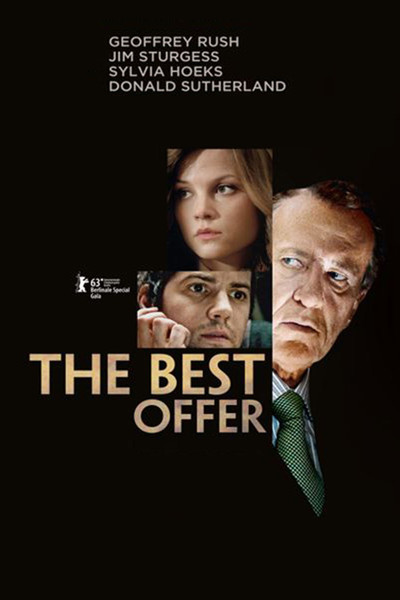 Brigitte Christensen as The Sister