With echoes of H.P. Lovecraft’s “The Colour Out of Space” and Stephen King’s “The Mist,” it’s pretty easy to pick out the influences on Jeffrey A. Brown’s stellar debut “The Beach House,” but it’s also a film that stands on its own two injured feet. Boasting sweaty, shaky camerawork and a firm grasp on tone, Brown’s grisly indie horror flick is yet another piece of work that feels unexpectedly suited to our times. Critics may wrestle with whether or not to reflect the state of the world in 2020 in their analysis, but art doesn’t exist in a vacuum, and there’s something almost morbidly funny about a movie in which the lives of two young people are upended by something vicious and violent in the air. After a slightly rocky first act that succumbs to thin generational differences, Brown allows his slow burn to catch fire and doesn’t look back. You may be regretting not being able to visit the beach this summer. Maybe it’s for the best.

Emily (Liana Liberato) and Randall (Noah Le Gros) are a young couple of college kids who go the beach home of Randall’s father to get away and work on their relationship. They’re at a classic crossroads for young couples, where it appears that two sweethearts may want different things out of life. Randall has dropped out of college; Emily is talking grad school. How can they stay together when they’re headed in very different directions?

After arriving at the beautiful house on what appears to be a literally empty shore—Randall mentions that it gets more crowded after Memorial Day, so they must be early for vacation season—Emily notices some signs of recent habitation in the kitchen, including fresh groceries. It turns out that the young couple isn’t alone, as an old friend of Randall’s dad named Mitch (Jake Weber) and his wife Jane (Maryann Nagel) have come to the beach house too for a different kind of vacation. Jane has health issues severe enough that this is probably their final trip, and Brown almost digs into the concept that both of these couples likely won’t be together at this time next year, although for very different reasons.

The couples get along, discussing life over dinner and a few bottles of wine. When they run out of booze, Randall pulls out the edibles he picked up on the way there, and everyone takes a bit, essentially passing out as they notice … something strange outside. There’s a fog in the air that appears to be coming off the water, moving toward the house, spreading particles of light. Everyone goes on different degrees of bad trips, but they wake up to something much worse. As someone terrifyingly says later in the film, “It’s not fog.”

Films about the fragility of the human condition have taken on different energy since March, with works like “Sea Fever,” “Relic,” and now “The Beach House” earning unintended layers, but Brown’s direction here would have been effective in 2019 too. He keeps things impressively tight, focusing on his four actors largely in slightly shaky close-up, allowing their reactions to what’s going on around them to produce the tension. There are moments of unforgettable imagery, especially in a scene involving Emily’s foot that will send the squeamish running for the door (wear a mask if you have to run all the way outside), but “The Beach House” is a wonderful example of lo-fi horror. Most of the shots are of Emily or Randall’s face, or the fog outside. "The Beach House" reminded me of one of the reasons I love indie horror, in that Brown understands how much can be done with a performer who conveys terror instead of just a gruesome plot twist or CGI. Liberato is great, allowing us to believe Emily’s mounting horror over the world around her, and Brown knows to place most of the film’s weight on her shoulders.

Brown has a great minimalist eye—there’s a shot of the stairs that’s been used in the poster that’s phenomenal. And Brown finds something in the emptiness of the world around this beach house that feels ominous long before things get Lovecraftian. Something is just off. It’s that sense you get on an empty beach that you’re alone and the world is much bigger and stranger than anyone knows. “The Beach House” leans into that feeling of human insignificance in the larger picture of the evolutionary cycle. In the grand scheme of things, we are but a blip on the timeline. Horror films like “The Beach House” like to play with the universal fear that the human blip can be erased. And it won’t be pretty. 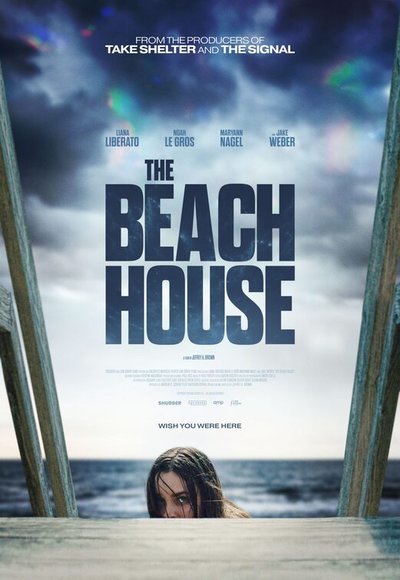