No film deserves to be dismissed on spec for sounding like an “Alien” rip-off. Then again, not all sci-fi pictures inspired by Ridley Scott’s decades-old masterpiece are created equal. For every “Life”—Daniel Espinosa’s stylish, space-set survival horror/thriller from 2017—there seems to be a lifeless “Sea Fever,” in which writer/director Neasa Hardiman attempts to transpose familiar beyond-the-atmosphere terrors to open seas and underwater. While the filmmaker, mostly known for her work in TV projects like “Jessica Jones” and “Happy Valley,” is competent behind the camera in pulling off a plausibly claustrophobic atmosphere, she sadly isn’t as savvy on the page for this particular fare. You wonder how high “Sea Fever” could have risen, if only Hardiman had truly embraced the bare bones of the genre, indulging in some well-wrought group dynamics and even a pair of sneaky jump-scares to boot.

Instead, Hardiman’s survival exercise, drenched in plenty of moody lighting and only ankle-deep mystery, is almost too subtle to care about, feeling an awful lot like a scream caught in one’s throat or an uncomfortably stifled sneeze. Acutely symptomatic of these story-based shortcomings is the lead character Siobhán (Hermione Corfield), a severe scholar of marine life tasked to chart biological patterns and diversions, and develop an algorithm accordingly (or something along those lines, based on her vaguely explained mission). Lucky enough to score a post in a commercial Irish fishing vessel as part of her studies, she joins half-dozen other crew members who are clearly less than thrilled about her company. Siobhán’s reclusive awkwardness doesn’t help, and neither does her flaming red hair, believed by folklores and legends to bring bad luck. Sadly, these are the only traits we get to learn about her. The story doesn’t give Corfield enough material to work with—in turn, her Siobhán feels too generic and one note.

The rest on the ship aren’t all that lucky in the development department, either. The series of clichés include Connie Nielsen’s Freya and Dougray Scott’s Gerard as the traditional, financially strapped couple who own and run the boat. Joining them are a handful of other conventional side players destined to fall prey to a menacing deep-sea monster—something that resembles a giant jelly fish with long, leech-y tentacles—that attaches itself onto the boat, leaking a gooey and poisonous green substance into the bowels of the craft. After a dive that reveals her the extent of the danger they’re in, Siobhán reluctantly becomes the brains the of group—but will she be able to stand in front of what’s coming? The beats that follow are almost embarrassingly predictable, down to a group dining scene when the crew finds out the hard way that they are being infected by something that chips away at their floating home. There is also another vessel that comes into the picture (you guessed it, every single person on it is dead) and a sequence of unfolding events that threatens to push the young academician’s squad into that same eventual gruesome fate.

In today’s rapidly shape-shifting world during the still-early days of the global Covid-19 crisis, there is something disturbing and spine-tingling about a parasitic being, a hostile virus turning the members of a tight-knit group against each other where the means to survival is isolation and sacrifice. But that accidental and vague present-day bearing doesn’t quite elevate a lackluster, mostly scare-free story told far more disturbingly (and with more present-day relevance) by John Carpenter’s “The Thing.” You’ll leave Hardiman’s deck wondering why you aren't more rattled, or even seasick, while hoping for another genre flick from the clearly skilled director soon. Perhaps one that anchors into a deeper story this time. 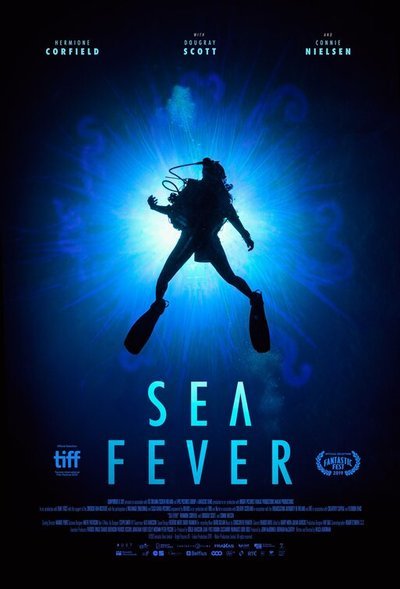