In terms of documentaries and their appeal to different audiences, two basic types might be discerned. One, which could be called the artistic doc, puts an emphasis on stylistic excellence and originality in offering penetrating, revealing views of their subjects, which could be, quite literally, anything. These are films that get rave reviews, draw general audiences to movie theaters, and end up on Oscar shortlists.

The second type might be called the niche doc. These appeal primarily to viewers who have a particular interest in their subjects. This type of film finds its natural audiences on television and in various specialized venues, sometimes educational, via different kinds of outreach efforts.

Keith Fulton and Lou Pepe’s “The Bad Kids” belongs to the second type, but seems to imagine that it’s the first. Why it might think that is because it’s one of those films that emerges from what might be called the Gates Foundation/Sundance Institute/George Soros/Ford Foundation complex, which often gives us docs that due to their prestigious institutional backing and “socially conscious” themes sometimes make it into certain big festivals (i.e., Sundance) and even movie theaters.

Because some people automatically equate a liberal-humanistic outlook and social concerns with artistic worth, a film like “The Bad Kids” can gain a theatrical release. But it’s not a film for most general theatrical audiences, even those specifically interested in documentaries. It’s for people interested in its main concern: education.

The film is mischievously titled. The kids at its center are not at all bad, as we immediately see. Eleventh and twelfth graders who attend the Black Rock Continuation High School, an alternative school in a poor corner of California’s Mojave Desert, they are considered “at risk” due to various factors that might keep them from earning high school diplomas: troubled homes, criminal activity, drug habits, or just bad attitudes. The school attempts to overcome these obstacles by letting the students design their own curricula and proceed at their own paces, while also offering them various forms of support, counseling and extracurricular help.

The filmmakers spend several months in the school, focusing on a few students and its very committed and skillful female principal. Joey, a scrawny disaffected blond boy, we first see when a truancy officer visits his home and asks what he wants out of life. His inchoate response only hints at troubles that begin with his mom’s drug addiction. He has a habit too, but is also a talented guitar player and songwriter: not a really bad kid by a long shot.

As “The Bad Kids” follows him over the months, Joey comes and goes, vis a vis what’s asked of him at Black Rock. One day we see him give another student a brief description of the difference between Thomas Hobbes and John Locke, adding that his favorite philosopher is Voltaire. No dummy he, obviously. But other times he doesn’t show up at school and has to admit, when he does return, that he’s been using.

We witness a similar waxing and waning with Lee, a burly black guy who has a child with another student, a skinny bespectacled girl named Layla. The two seem to want to do the best for their (adorable) little boy, but Lee has difficulties with his elders at home, as do many of these kids. Sometimes he appears quietly motivated; at other times, about to slide off the planet, with no idea why he should be struggling for a diploma.

The school’s principal, Vonda Viland, is a truly compelling figure who’s endlessly but very unpretentiously dedicated to her mission. From the time each school day begins, when she’s out front of Black Rock offering smiles and cheery greetings to students, though an arduous day of tete-a-tetes with her sometimes difficult charges, she stays focused and eloquent, occasionally giving kids very personal examples from her own life that they can relate to. The fact that the school is so successful at getting the majority of its students to the goal of graduation obviously owes a lot to her energy and expertise.

I said above that the film’s subject is education, but of course there’s another too: poverty. Though it’s nowhere nearly as striking and complex and Marc Levin and Daphne Pinkerson’s “Class Divide,” a brilliant education-themed doc from earlier this year, “The Bad Kids” also shows the effects economic inequity has on schools and the kids who pass through them.

The film is mounted in a serviceable but undistinguished verité manner that eschews talking heads, explanatory titles and other means of conveying information. This of course is the approved style for many docs now, especially those that want to be considered “artistic,” but here it leaves unaddressed various questions its primary audience is bound to wonder about. How was the school’s approach developed? How many schools in the country use it, and with what rates of success? What kind of backing does it get from the state of California and the local school board? What happens to the kids who don’t make it to graduation day?

“The Bad Kids” is interesting enough in what it shows us to spark interest in what it leaves un-shown. In its case, the information supplied by a few well-chosen talking heads could have given it additional clarity and appeal. 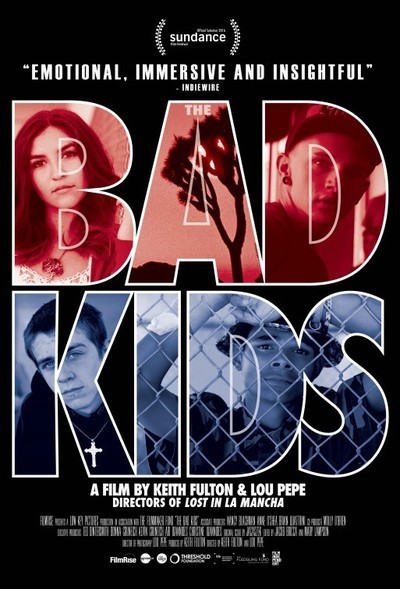