“Class Divide,” a fascinating documentary by Marc Levin and Daphne Pinkerson, focuses on a macrocosm and a microcosm, both within the urban sprawl of New York City. The macrocosm is the slice of Manhattan known as West Chelsea, which in the last decade has seen a real estate boom spurred in part by the success of the innovative urban park known as the High Line.

The microcosm is the intersection of 10th Avenue and 26th Street, where one of the most elite and pricey K-12 schools in the city faces a housing project that contains some of Manhattan’s poorest families, whose kids attend public or parochial schools. While the film contains interviews with all sorts of adults involved with the locations it concerns, some of its most illuminating comments come from kids on the two sides of 10th Avenue, who reflect on their circumstances and the fortunes life has given them.

As its title indicates, the film is concerned with the issue of class in America and specifically New York City, but it embraces many subjects, appropriately for a city that contains multitudes. One of the most engrossing—and visually engaging—is the back story of the High Line and West Chelsea’s development. For much of the last century, the area was industrial, with elevated trains that would, for example, bring in turkeys to be slaughtered and exit with their meat. But over time the industries gradually departed and the train tracks became derelict structures that begged to be torn down.

In 1999, two Chelsea residents began a then-lonely crusade to turn the abandoned railway into an outdoor elevated park. It took years for them to win over other residents and New York power brokers, but by 2006 construction began and the first section of the High Line opened three years later (two more sections have opened since). The park was an instant smash. For anyone who hasn’t visited the popular tourist attraction, “Class Divide” amply documents its appeal as a wonderfully cinematic window onto the Hudson River on one side and the great panorama of downtown Manhattan on the other.

In what may be this story’s sharpest irony, the real estate industry, which had been the High Line’s fiercest opponent, became its primary beneficiary. Property values soared and a building boom ensued. Longtime residents were hustled out of their apartments, neighborhood character changed drastically as chic restaurants and designer shops replaced corner delis, and architects seemed swept up in a contest to see who could outdo the others in trendy ostentation. And there’s more to come. The development of Hudson Yards, one expert says, will result in a “Hong Kong on the Hudson [with] 13 residential buildings, some of which are 60 to 90 stories.”

The filmmakers very deftly interweave this tale of urban transformation with their portraits of the two very different communities that border 10th Avenue. “Avenues: The World School” is as sleek and hi-tech as its $47,000 annual tuition would suggest: but for the youth of its denizens, it could be a Google or Apple campus. The Elliot-Chelsea Houses, on the other hand, hearken back to an earlier era when “projects” and “ghetto” became depressingly synonymous.

Talking with the residents of these different worlds, and contrasting their different lives, is where the film’s heart and greatest insights reside. To the filmmakers’ credit, they seem to approach their subjects with no simplistic agenda but a genuine desire to engage and understand everyone they meet. Yet their inquiry suggests one consequence of the growing economic inequality that afflicts American society: the presence of the interviewers’ cameras notwithstanding, youngsters on both sides of the class divide seem beset with an ever-increasing sensitivity regarding their own status.

The mostly white, upper-class kids at Avenues (which, to give due credit, does have some scholarship students) are aware of the poverty that stares at them from across the street, and of their own privileged lives. Some also seem to feel like they’re caught in a trap. While they might like to change the world they’re inheriting, they’re also under tremendous pressure to succeed by those who are giving them their advantages.

The families in Elliott-Chelsea are also aware of the effects of wealth, but from the perspective of those who must suffer its lack. They are often just scraping by, trying to stay together, with the parents regretting the things they can’t give their kids and the kids worrying over both their parents’ hardships and their own prospects. Among the basketball-playing male adolescents, there’s an interesting dialectic between some who seem resigned to their dependent, lower-class status and others who are fiercely determined to break out of it.

There are remarkable youngsters on both sides of this divide. At Avenues, 17-year-old Yasemin Smallens creates a project called “115 Steps,” for the number of steps it takes to walk from the school to the housing project. It’s aimed at facilitating dialogue between people on the two sides of the street, and the examples we see in the film of these conversations are indeed thought-provoking and memorable.

Then there’s the little girl who pretty much steals the show. Her name is Rosie, and she’s an eight-year-old from the projects who has the brightest personality you may see on any screen this year. She’s feisty, smart (she wants to be a professor of geology at Columbia, or a surgeon), spunky, super-observant and opinionated, saying things like, “I hate money. I hate, hate, hate, hate, hate, hate money … Money was made by the Devil, I think, because God didn’t say, ‘Oh, you have to pay for this.'”

After getting a tour of Avenues, Rosie applies for a scholarship, but the end of the film reveals she was turned down. Let’s hope that those who encounter Rosie’s delightful presence in “Class Divide”—including, perhaps, her idol Beyoncé—will begin a petition to get that regrettable decision reversed.

Note: HBO will distribute "Class Divide" and it will premiere on the network in the Fall.
Advertisement 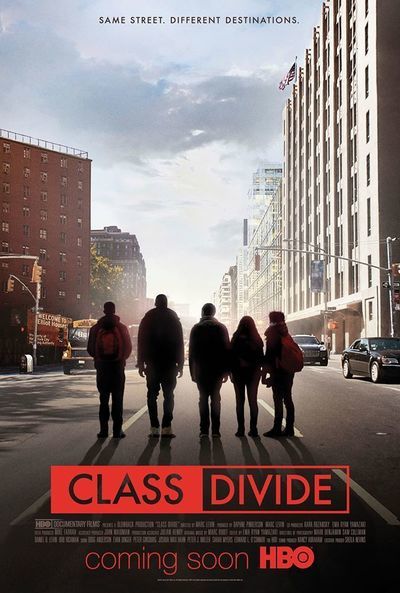