The work of Henry James, matters of era-appropriate primness and stylistic obscurantism aside, has plenty of narrative intrigue and juice. Which hasn’t stopped film adaptors of James’ work from tricking things up every now and then. On the plus side you’ve got Jacques Rivette’s 1974 “Celine and Julie Go Boating,” which built a through-the-looking-glass main story around a theatricalized treatment of James’ odder-than-usual novel The Other House, and Scott McGehee and David Siegel’s 2012 “What Maisie Knew,” which laid out James’ story in a completely contemporary setting with bracing results.

Then there was Michael Winner’s 1971 “The Nightcomers,” a Turn of the Screw prequel that posited kinky goings-on between not-yet-dead Peter Quint and Miss Jessel, an item of interest mainly to fans of a near-dissolute Marlon Brando and a not at all dissolute Stephanie Beacham. Gonzo, but not exactly good.

And now there’s “The Aspern Papers,” which takes the possibly even more eccentric tack of playing a story about literary legacies and lost loves as if it’s “Interview With A Vampire” and sometimes even a Hammer horror film.

Directed by Julian Landais, an actor and onetime model, the movie doesn’t lack for lush appearances. The story is set in Venice, and begins with the evocation of the 19th-centuy poet Jeffrey Aspern, who is seen, Shelley-like, washing up dead on an immaculately-kept shore and being burned as his young lover clutches a folded sheaf of letters to her bosom. The aforementioned papers, you see. Years later, the American protagonist and narrator, Morton Vint, worms his way into the Venice villa occupied by the aged Julianna Bourdereau (Vanessa Redgrave) and her middle-aged unwed niece Tina (Joely Richardson, Ms. Redgrave’s real-life daughter). Julianna is the now-elderly possessor of those papers. Now a recluse, she is not inclined to share these documents, particularly with nosy literary types.

Although he’s playing a man of letters, Jonathan Rhys-Meyers swans around the film’s settings with a pout that suggests that he’s waiting for his cue to sing “Please allow me to introduce myself.” He offers his services as a gardener to the lonely ladies, while agreeing to pay an inordinately high rent for his quarters. Why this strategy is supposed to work with respect to getting his hands on those letters isn’t given much consideration here. Casting the movie as a sort of battle of wills between Julianna and Morton, and allowing both Rhys-Meyers and Redgrave to glare at each other and apply ripely melodramatic readings to dialogue that does, in large part, derive from the original, the movie gives short shrift to Tina.

This character is a classic Jamesian shut-in, in the tradition of Stransom in “The Alter of the Dead” and Catherine Sloper in “Washington Square,” an inward-inclined protagonist who makes some attempt to engage the outside world with unfortunate results. This peculiar and ineffectual film shunts her aside in favor of all manner of posturing, not just those between Rhys-Meyers and Redgrave, but a dippy if pictorial ménage-a-trois for the flashback Aspern and the eligible-single-ladies-packed salon life of Vint’s improbable (as rendered here, at least) Venice pal Mrs. Prest.

The executive producer here is James Ivory, who as director helmed some much more straightforward, and effective, James adaptations in the '70s and '80s, one of which also featured Vanessa Redgrave, 1984’s “The Bostonians.” Check it out! 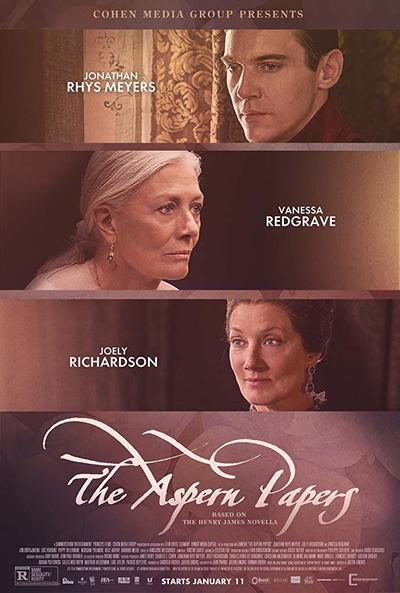