During the early 20th century, America was embroiled in numerous skirmishes: the Spanish Flu spread across the country in 1918; a World War raged in Europe. But another conflict existed amongst these two, the presence of racial violence. 1910 witnessed the Slocum massacre, when whites murdered two 200 Black residents in Slocum, Texas. 1917 saw white mobs in East St. Louis, Illinois and Chester, Pennsylvania commit racial violence too. And two years later, for three months, and across a dozen cities, returning whites purportedly angered by Blacks taking their jobs during the war, dealt widespread atrocities against Blacks in a moment known as “Red Summer.”

Kevin Willmott’s historical war drama “The 24th” nestles itself during the discord of 1917. The all-Black 24th Infantry is stationed in Houston, Texas to guard the construction of Camp Logan, a training ground for white soldiers expected to fight in France. The Black soldiers arrive with the same expectation. They believe if they do well then they’ll be sent to combat where they can prove themselves. But the servicemen soon discover the oppressive weight of Jim Crow and endure a barrage of indignities and abuse which spurs them to do the unthinkable.

Originally slated to premiere at SXSW 2020 before the festival’s cancellation, "The 24th" follows Corporal William Boston (Trai Byers), a light-skinned Black man concerned with earning the respect of his fellow darker-skinned comrades and his country. Culminating with a recounting of the Houston riot of 1917, Willmott’s drama attempts to redeem the actions of these men by re-contextualizing the era, yet unduly muddles itself in the theme of colorism.

Willmott is best known for his collaborations with Spike Lee, having co-written “Chi-Raq,” “BlacKkKlansman,” and “Da 5 Bloods.” He co-writes “The 24th” with Byers, and like Lee's “Do The Right Thing,” the heat plays a vital role amidst several vicious acts carried out by white Houstonians. For instance, during a lunch break, Lucky (Lorenzo Yearby) sits to eat, only to endure white builders urinating on him from an adjacent roof. Two racist cops, Cross (Cuyle Carvin) and Evans (Derek Russo), terrorize the local Black residents with pistol-whipped beatings. Similar acts of mistreatment occur inside the camp. In one scene, a particularly vile Captain (Jim Klock) beats both Boston and Walker with a sack of grapefruits. These scenes are brief but brutal. And amid the sweltering temperatures, demonstrated by the sweat bleeding through the soldiers’ olive-colored uniforms, the tempers rise.

Through the lanky Boston, “The 24th” recounts colorist tensions felt among Black people during the early 20th century, which still exist today. When Boston arrives with the other men, he’s at once an outsider and worshiped. Educated at the Sorbonne in France, articulate, and light-skinned, he’s either praised as the ideal Black man by his friends or ridiculed by darker-skinned servicemen like Walker (Mo McRae) and his superior Sgt. Hayes (Mykelti Williamson, who offers a spirited performance). Toting a copy of Booker T. Washington’s Up From Slavery, he believes in the strategy of upward mobility promoted by contemporaneous Black intellectuals: The race must obtain skills and education to pull themselves up by their bootstraps, so to speak. Boston exists in a different reality than his dark-skinned counterparts, who aren’t afforded boots, much less straps.

"The 24th" centers itself on the plight of a light-skinned Black man while the dark-skinned characters are often posited as either ignorant or insensitive. In one scene, Boston tries to prove how he experiences the same hurt as Walker. The former lost his parents at a young age due to the 1906 Atlanta riots, the latter is in the army, not of his own volition like Boston, but because a judge gave him an ultimatum of either the military or prison. The pair also fight over the affections of Marie (Aja Naomi King), a local piano player, which leads to a tussle. With regards to Sgt. Hayes—embittered by losing credit for San Juan Hill to Teddy Roosevelt—Boston accuses him of cowardice after Hayes insinuates that Boston is an Uncle Tom to Col. Norton (Thomas Haden Church).

A slough of a first act—where the only relief from the violence comes by way of Boston and Marie’s endearing romance—is followed by a tense second act: the Houston riot of 1917. Spurred by a savage assault on Boston by local police, the Black soldiers take up arms and enact revenge upon the white residents of Houston. The sequence is cathartic and startling. Each fulfillment of revenge feels personal, yet the men carry them out with cold military precision. Alex Heffes’ affecting score and Brett Pawlak's dark, portentous cinematography give the sequence a haunting aura of the long ignored now seen. By the final defiant act—their trial—no man regrets his actions.

While the harrowing second act and the tragic final minutes bring some redemption to Willmott’s “The 24th,” the historical drama is too distracted with showing the brutality inflicted upon these men rather than their humanity. Furthermore, Boston’s journey to prove himself to his race and country takes unnecessary attention off the plight of the dark-skinned servicemen. Though Willmott has the best intentions with “The 24th,” and the story of this infantry is ripe for the Black Lives Matter era, the narrative drama is a missed opportunity to honor these fallen heroes.

Now available in virtual cinemas and on digital platforms. 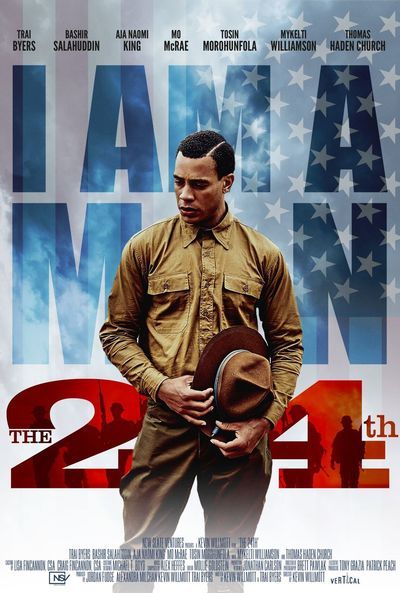