Controlled, alert, and seemingly game for anything, Ethan Hawke has become one of the most reliable presences in movies. Unfortunately, director Michael Almereyda's risk-taking historical drama "Tesla," about inventor Nikola Tesla, never quite adds up in the way one might wish. And it inadvertently puts Hawke in the position of having to carry a film that's more of a series of half-formed notions, some intriguing, others ill-advised, and a few verging perilously close to cute.

Throughout most of the movie, Tesla is stuck either reacting to other, more lively characters (including Kyle MacLachlan, radiating authority and self-regard as inventor Thomas Edison), fretting about his own approach to generating and harnessing electricity, and putting his important relationships on the back burner. It's tough to say what this film's version of Tesla is all about, in any sense, because it's more interested in digressions that feel like something that would make better sense in an underground theater production.

Tesla's main squeeze Anne (Eve Hewson of "The Knick"), the daughter of financier J. Pierpont Morgan, narrates the story, and serves as the anchor point for Almereyda's self-aware asides. At one point she opens an Apple laptop computer and tells us that Tesla, for all his brilliance, returns half as many Google search results as Edison, and that there are only a handful of photos of Tesla in existence. An early scene of Tesla pushing back against Edison's cheerful arrogance ends with the two men jabbing ice cream cones into each other's clothes and faces. Ann cuts the moment short to inform us that it's unlikely that anything like that ever happened. Then we watch an "accurate" replay of the scene, which wasn't all that interesting until the ice cream fight began.

How can a viewer become intellectually and emotionally invested in a story that has a human question mark at its center? Other biographical dramas have mostly solved the problem, notably "Lawrence of Arabia," but it's not easy, especially on a low budget. And this one doesn't do itself any favors by concentrating on flourishes and marginalia and the question of how it's even possible to know a historical personage, especially one who didn't leave as much of a biographical paper trail as some of his contemporaries.

"Tesla" is worth seeing for obsessives who want to watch anything Hawke does, or who are fascinated by unconventional approaches to storytelling in the time of Edison. The supporting cast is aces; the standout is Jim Gaffigan as George Westinghouse, pumping so much life into his character that you wouldn't be surprised if he opened his mouth and started singing Gilbert and Sullivan.

Almereyda is a great and still largely unsung American filmmaker, distinguished by his determination to take risks in both style and content. His 2000 modern-dress version of "Hamlet," starring Hawke as Shakepeare's prince, might be his masterpiece, though it's hard to choose from a filmography that includes gems like the vampire film "Nadja" (with Peter Fonda as Van Helsing, partly shot with a toy Pixelvision video camera) and 2017's unique science fiction drama "Marjorie Prime." But this one doesn't rank with his best.

There's a subcategory of biography with a message that might be summed up as, "How can anybody know anybody from another time period? Biography is just speculation anyway." Whether a film in that vein fails or succeeds depends on more than craft and invention. It's a mysterious thing. There's magic involved. For whatever reason, "Tesla" is short on magic. It's a film about electricity and light that never fully illuminates its main character, and there are long stretches when it feels more like a dramatized series of notes for a movie than a movie. 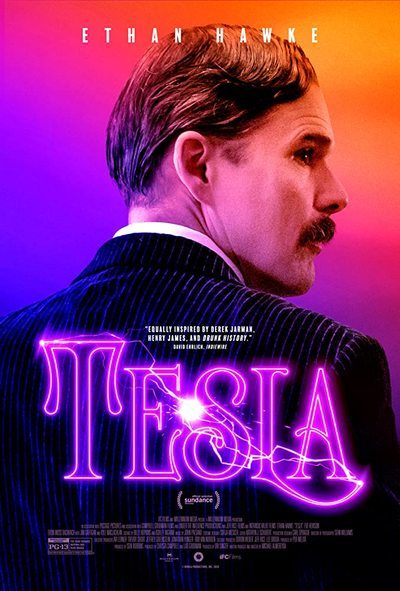 Rated PG-13 for some thematic material and nude images.